You are here: Home › politics › The Sugar Act and the American Revolution 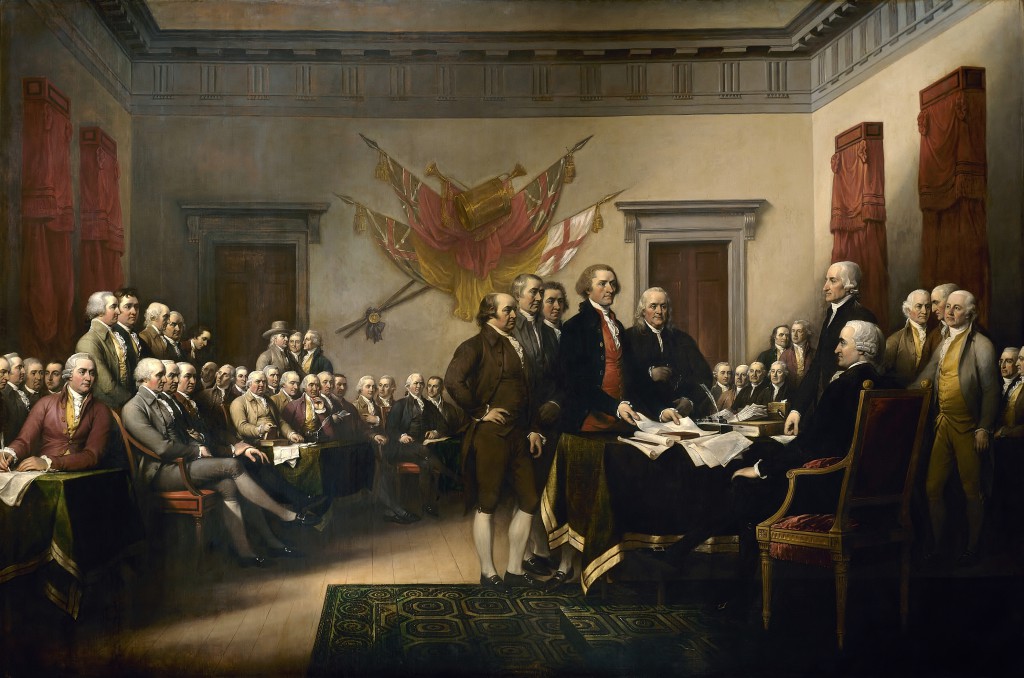 John Trumbull’s Declaration of Independence, showing the Committee of Five presenting its work to Congress

On April 5, 1764, the Sugar Act passed by the Parliament of Great Britain. The Sugar Act, also known as the American Revenue Act or the American Duties Act, was a revenue-raising act superseeding the earlier Molasses Act of 1733, which had imposed a tax of six pence per gallon of molasses, had never been effectively collected due to colonial evasion. By reducing the rate by half and increasing measures to enforce the tax, the British hoped that the tax would actually be collected. These incidents increased the colonists’ concerns about the intent of the British Parliament and helped the growing movement that became the American Revolution.

The Molasses Act of 1733 was passed by the Parliament at the insistence of large plantation owners in the British West Indies. The act imposed a tax of six pence per gallon on imports of molasses from non-British colonies. In the first part of the 18th Century, the British West Indies were Great Britain’s most important trading partner, so Parliament was attentive to their requests. However, rather than acceding to the demands to prohibit the colonies from trading with the non-British islands, Parliament passed the prohibitively high tax on the colonies on molasses imported from those islands. Smuggling, bribery or intimidation of customs officials effectively nullified the law. The British government increased the national debt during the Seven Years’ War. In 1763, the war ended and the ministry decided to maintain a standing army of ten thousand British regular troops in the colonies. Then, George Grenville replaced Bute and faced the problem of servicing the national debt of almost £130,000,000 by the beginning of 1764. George Grenville expected the Americans to pay a portion of the expenses for colonial defense and estimated these expenses to be approximately £200,000 annually. Therefore, he devised a revenue-raising program that would raise an estimated £78,000 per year.

The Molasses Act was set to expire in 1763. The Commissioners of Customs anticipated greater demand for both molasses and rum as a result of the end of the war and the acquisition of Canada. They believed that the increased demand would make a sharply reduced rate both affordable and collectible. When passed by Parliament, the new Sugar Act of 1764 halved the previous tax on molasses. Additionally, the purpose of the legislation was not to simply regulate the trade but to raise revenue. The new act listed specific goods that could only be exported to Britain. Ship captains were required to maintain detailed manifests of their cargo and the papers were subject to verification before anything could be unloaded from the ships. Customs officials were empowered to have all violations tried in vice admiralty courts rather than by jury trials in local colonial courts, where the juries generally looked favorably on smuggling as a profession.

When the Sugar Act was passed on April 5, 1764, it hit the colonies during a time of economic depression. Colonials assumed that the new tax program was the major culprit. As protests against the Sugar Act developed, it was the economic impact rather than the constitutional issue of taxation without representation that was the main focus for the colonists. The prime movers behind the protests were Samuel Adams and James Otis. Adams drafted a report on the Sugar Act for the Massachusetts assembly, in which he denounced the act as an infringement of the rights of the colonists as British subjects. During August of 1764, several Boston merchants agreed to stop purchasing British luxury imports. In Boston and New York there were movements to increase colonial manufacturing. Especially in Rhode Island there were outbreaks of violence. However, the high level of protest over the Sugar Act began in the later part of the next year when the Stamp Act was passed. In 1766, the Sugar Act was replaced with the Revenue Act of 1766, which reduced the tax to one penny per gallon on molasses imports, British or foreign. This occurred around the same time that the Stamp Act of 1765 was repealed. These disputes marked the beginning of the American Revolution.

Joanne Freeman, 2. Being a British Colonist, [5]