You are here: Home › war/crime › The Last Victim of the Spanish Inquisition 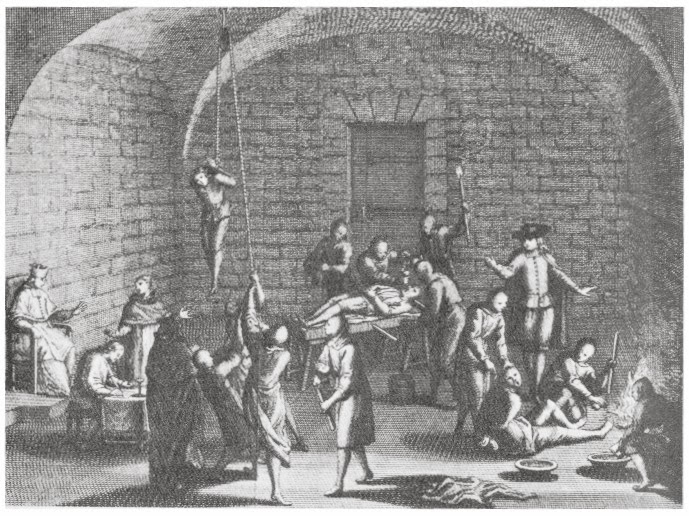 On July 26, 1826, Cayetano Ripoll, a schoolmaster in Valencia, Spain, teaching deist principles should become the last victim executed by the Spanish inquisition. Ripoll has the dubious honor of being the last of the many people known to have been executed under sentence from a Church authority for having committed the act of heresy. For almost 350 years the Spanish inquisition tried to secure the primacy of the Catholic Church in Spain. There have been many crimes and wrongs committed by the Church, but the Spanish Inquisition for sure was one of the worst.

Tribunal of the Holy Office of the Inquisition

Officially entitled as the Tribunal of the Holy Office of the Inquisition (Spanish: Tribunal del Santo Oficio de la Inquisición), the Spanish Inquisition was a tribunal established in 1481 by Catholic Monarchs, Ferdinand II of Aragon and Isabella I of Castile. Fray Alonso de Ojeda, a Dominican friar from Seville, convinced Queen Isabella of the existence of Crypto-Judaism among Andalusian conversos during her stay in Seville between 1477 and 1478. A report, produced by Pedro González de Mendoza, Archbishop of Seville, and by the Segovian Dominican Tomás de Torquemada – of converso family himself – corroborated this assertion. Spanish monarchs Ferdinand and Isabella requested a papal bull establishing an inquisition in Spain in 1478. In 1483, Ferdinand and Isabella established a state council to administer the inquisition with the Dominican Friar Tomás de Torquemada acting as its president, even though Pope Sixtus IV protested the activities of the inquisition in Aragon and its treatment of the conversos. Torquemada eventually assumed the title of Inquisitor-General.

The first public punishment occurred in February 1481 when six people were burned alive and after that, the Inquisition grew throughout the kingdom. Only two years later, a new court system established, taking care of the confessions and collected the accusations while starting physical torture to extent the confession rate. The most active period during the Inquisition is assumed to be between 1480 and 1530 with around 2000 executed people, mostly being of Jew origin.

In the first years of the institution’s existence, more than 90% of the defendants were conversibles, i.e. people who had converted from the Jewish to the Christian faith, as well as their baptized descendants. From the end of the 16th century onwards, the number of trials against moriscos, i.e. people who had converted from the Muslim to the Christian faith, then predominated. The Spanish Inquisition’s fight against Lutherans (mostly foreigners) and alumbrados, on the other hand, was a marginal phenomenon in terms of numbers.

To keep their system working, the Spanish Inquisition established indexes of prohibited books [5] including religious works such as vernacular translations of the Bible. Also prohibited were several popular works of Spanish literature and many works by non Spanish authors like Ovid, Dante, Rabelais, Ariosto, Machiavelli, Erasmus or Jean Bodin.

Next to religious accusations, several further offenses were to be controlled with the Inquisition. Witchcraft was a big topic during the most active periods as well, even though it is assumed that the Spanish Inquisition stayed skeptical towards witchcraft cases in contrast to many other European countries. Other enforced laws concerned bigamy, sodomy, being homosexuality or rape.

Trials for witchcraft took place both before courts of the Spanish Inquisition and before secular courts. In 1498 the first convictions were handed down by the Inquisition Tribunal in Zaragoza. In 1525, the Suprema decreed that no one should be arrested for witchcraft if there was nothing but the testimony of others accused of witchcraft. The property of defendants who voluntarily confessed should not be confiscated. In 1610, a witch trial was held before the Inquisition Tribunal of Logroño against 53 defendants. Six of the condemned witches were burned for real and five for in effigy. One of the three inquisitors, Alonso de Salazar y Frías, had spoken out against the convictions. The sentences were nevertheless confirmed by the Consejo de la Suprema Inquisición. On behalf of the Suprema, Alonso de Salazar y Frías investigated further rumors of witchcraft activities in Navarre. He came to the conclusion in 1614 that there was no evidence of witchcraft. This actually prompted Suprema to refrain from conducting any further witch trials in this case and even to rehabilitate the convicts of Logroño.

The Inquisition Tribunal as illustrated by Francisco de Goya (1808/12)

How did the Inquisition work?

But how did the Inquisition work? When the Inquisition arrived a certain city, a Sunday mass was held followed by the call for non believers to turn in themselves. Often, people did so, because punishments were not as severe and often they took this chance to denounce others as well. Accusing others for heresies went by anonymously and defendants were not able to find out who denounced them, which led to numerous false accusations caused by personal rivalries. When a person was denounced, the case was examined and the person was held in custody while his property was used to pay imprisonment costs. After a long time of waiting a trial took place with several hearings which the defendant was able to find witnesses for. Another strategy was to proof the accusers non trustworthiness. During the process, the accused was tortured in order to extract a confession and this method was applied without the slightest distinction of sex or age. If a person was found guilty, the cruelest punishment depicted burning alive in public.

The conclusion of a trial of the Spanish Inquisition was the Autodafé, where the verdicts of a large number of trials were publicly announced. The auto-da-fé stood as a symbol of the Last Judgement. Its solemn staging is considered a special feature of the Spanish Inquisition. It usually took place in the presence of all secular and ecclesiastical dignitaries and the entire population of the judicial district. The holding of an auto-da-fé had to be announced eight days in advance. In most cases, however, the event, which was celebrated as a public festival, was known much earlier. The autodafé, which was held in Valladolid in May 1559, is said to have been attended by 200,000 people, in addition to several members of the royal family. At the auto-da-fé, the sentences were read out and public abjuration or reconciliation was carried out. The execution of the punishments, e.g. giving whip lashes or burning at the stake, took place at a separate event. 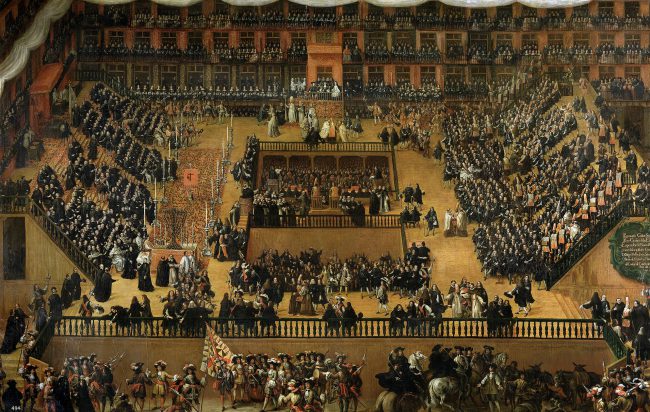 In a decree issued by Napoleon in December 1808, the Inquisition was abolished in the part of Spain occupied by French troops. Also the Cortes of Cádiz, acting outside the French sphere of power, abolished the Inquisition tribunals on 22 April 1813, on the grounds that the purity of Catholicism was better off with the bishops. On his return from French exile in 1814, King Ferdinand VII reinstated the Inquisition. In 1820, at the beginning of the Trienio Liberal, Ferdinand was forced to dissolve the Inquisition. In 1829 the Pope transferred the tasks of the Spanish Inquisition to the Roman Inquisition. The Spanish Inquisition was officially abolished on 15 July 1834 during the reign of Queen Isabella II, eight years after the last man was executed, Cayetano Ripoll. He became a deist after being captured by French soldiers during the Peninsular War and taught his understandings at a Spanish school when returning. There he was soon accused by the Spanish Inquisition of being a deist and of teaching his students about deism. He was later arrested for heresy and held in jail for close to two years. Before being burned to death, Ripoll shouted “I die reconciled to God and to man.“