You are here: Home › literature › Sir Walter Scott and the Invention of the Historical Novel 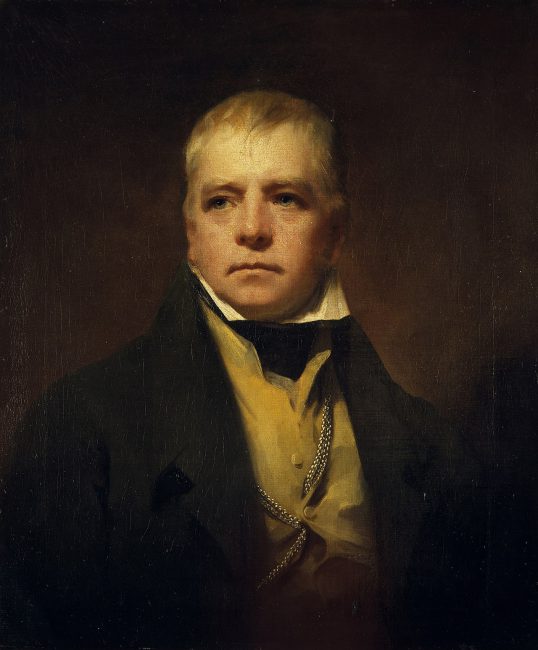 On August 15, 1771, Scottish historical novelist, poet, playwright, and historian Sir Walter Scott was born. He was one of the most widely read authors of his time – not only in Europe – and is traditionally considered the founder of the historical novel. Many of his historical novels have become classics and have served as models for numerous plays, operas and films. I remember as a child that I was watching the 1952 Hollywood adaption of Ivanhoe as a perfect Sunday afternoon entertainment on tv. Years later I’ve read the famous novel which by far was better than the Hollywood spectacle.

“A lawyer without history or literature is a mechanic, a mere working mason; if he possesses some knowledge of these, he may venture to call himself an architect.”
– Sir Walter Scott, Guy Mannering (1815)

Scott was born as the ninth of twelve siblings, six of whom died at an early age. In the second year of his life he was infected with polio and therefore had a paralyzed leg for the rest of his life. His father, also Walter Scott, was a lawyer and, as Writer to the Signet, a solicitor with extended skills. His mother, Anne Rutherford, was the daughter of a professor of medicine. After an apprenticeship with his father, he changed his professional direction, studied law at the University of Edinburgh and became a trial lawyer at the age of 21. Despite his later extensive literary work, he remained active as a lawyer throughout his life: 14 years as an advocate, 33 years as a sheriff and 24 years as a Clerk of Session (overlapping periods).

He began his literary career at the age of 25 with poetic translations of German ballads: The Chase and William and Helen. His great interest in the traditions of his homeland had led him to collect folk ballads since his youth; from 1802 he published as a three-volume work The Minstrelsy of the Scottish Border, with ballads arranged by him and also with his own ballads. Scott achieved broad recognition through his epic verses, which were extraordinarily successful from the beginning, “the first bestsellers in verse form” with astonishingly large editions, beginning with The Lay of the Last Minstrel in 1805, followed by Marmion in 1808 and others.

Waverley or the Birth of the Historical Novel

“Now I protest to thee, gentle reader, that I entirely dissent from Francisco de Ubeda in this matter, and hold it the most useful quality of my pen, that it can speedily change from grave to gay, and from description and dialogue to narrative and character. So that, if my quill display no other propertoies of its mothergoose than her mutability, truly I shall be well pleased; and I conceive that you, my worthy friend, will have no occasion for discontent. From the jargon, therefore, of the Highland gillies, I pass to the character of their Chief. It is an important examination, and therefore, like Dogberry, we must spare no wisdom.”
– Sir Walter Scott, Waverley (1814)

Scott’s first work as a novelist was the novel Waverley, published anonymously in 1814, whose plot is set in the last Jacobite uprising, an uprising that started in Scotland in 1745 and was aimed at restoring the House of Stuart against the House of Hanover, which ruled London. The novel immediately caused a furore; with it, Scott practically founded the modern historical novel, at least for the English-speaking world. In rapid succession, he wrote in the following 10 years a wealth of other historical novels and stories with Scottish themes that is hardly surpassed in the annals of literary history: Guy Mannering, Old Mortality, Rob Roy and more, all of them (and later) published without his name, only with the indication “Author of Waverley” or under a pseudonym.

In contrast to the poetry with which he had come to prominence until then, prose at that time was considered second-rate, if not dubious. Although it gradually became an open secret who the ‘Wizard of the North‘, as the unknown bestselling author was called, Scott maintained anonymity until 1827. Particularly after his elevation to the nobility in 1818, he considered writing novels to be an improper breadwinning occupation for a gentleman; it was only at a public dinner in the Assembly Rooms in Edinburgh in 1827 that the secret of his authorship was officially revealed.

While the plots of his first novels were all set in Scotland in the 17th or 18th century, Scott expanded the circle of his settings in terms of space and time, beginning with Ivanhoe (1820): Ivanhoe is set in 12th century England, Quentin Durward (1823) in France and Anne of Geierstein (1829) in 15th century Switzerland. Scott also reached contemporary English and continental European audiences with these works in particular. In between, however, he repeatedly returned to Scottish themes, even in his shorter prose works such as the short stories in the Chronicles of the Canongate.

Scott’s great achievement, however, was not so much the reconstruction of the historical colouring, but rather the portrayal of characters in the historical milieu, with which the readers were given a new, lively approach to the story. Especially the characters from the lower social classes are portrayed in Scott’s novels with a humanity and immediacy that has rarely been seen in literature before. Thus, his novels feature numerous typical characters who are important for the narrative, who come from the people and often also show comical traits.

Scott himself kept his novels at a distance and regarded them largely as commercial matters, although he was the first author of English literature to become a personality of national standing and national prestige during his lifetime. Although fiction was at the forefront of Scott’s work, he also published literary essays, historical stories for children, a book on the belief in magic and witches, and others, in particular a nine-volume biography of Napoleon. Scott participated intensively in public life and was significantly involved in certain political and social issues and projects. In 1818, for example, he led the successful search for the Scottish crown jewels, which had been almost forgotten for decades. In 1820 he was elected President of the Royal Society of Edinburgh. In 1822 he arranged and organised the successful visit of the unpopular King George IV to Edinburgh. It was the first visit of a British monarch on Scottish soil after more than 170 years

The economic success of his works enabled Scott to enter the printing business of his school friend James Ballantyne in 1805, and later to found a publishing house with the Ballantyne brothers, each as a silent partner. There his works were printed and occasionally published. A lavish, hospitable and generous lifestyle, but above all the expansion and furnishing of Abbotsford swallowed up vast sums of money and led to Scott’s need for more and more money, despite the considerable sales figures of his books. He demanded and received considerable advances from his current publisher Archibald Constable and also used the printing works of which he was a co-owner to borrow money and make large profits.

Scott could have largely freed himself from this situation through bankruptcy proceedings with subsequent discharge of residual debt (Abbotsford already belonged to his son Walter at this time). Scott’s sense of status as a gentleman (bankruptcy would have been a ‘commercial’ solution) and his sense of honour (debts must be paid) stood in the way of this. So he decided, with the consent of the creditors, to make a Trust Deed, a deed based on an out-of-court settlement, whereby his remaining and future assets were placed under the control of the creditors and he undertook to pay off the debts. Scott faithfully observed this. If he had been a very productive writer before, he now wrote non-stop, ruining his health in the process. At his death, the debt was largely paid off; a few years later, it was completely paid off by the sale of his remaining work rights.

In his final years, Scott’s health was failing, and on 29 October 1831, in a vain search for improvement, he set off on a voyage to Malta and Naples on board HMS Barham, a frigate put at his disposal by the Admiralty. He was welcomed and celebrated wherever he went, but on his journey home he had a final stroke and was transported back to die at Abbotsford on 21 September 1832