You are here: Home › literature › Sebastian Brant and the Ship of Fools 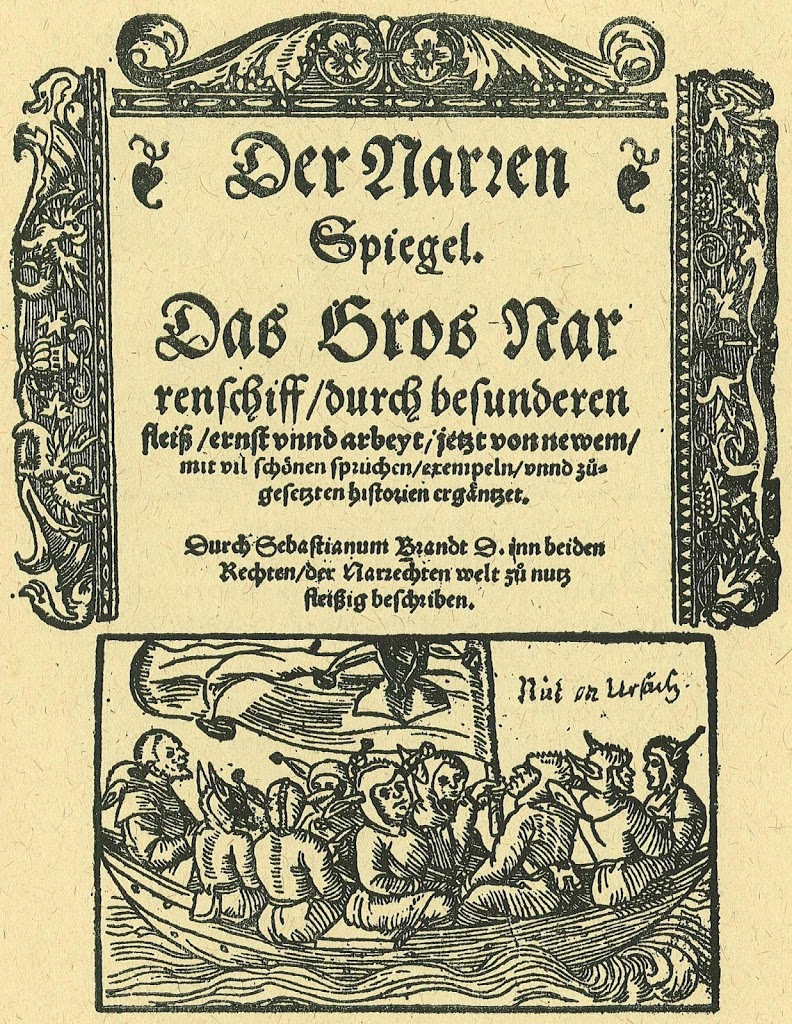 Sebastian Brant’s ‘Ship of Fools’, cover of the 1549 edition

On May 10, 1521, German humanist and satirist Sebastian Brant passed away. He is best known for his book of satire entitled ‘Das Narrenschiff” (The Ship of Fools) published in 1494 in Basel, Switzerland. It is most likely that you might have never heard of Brant nor of his famous book. Anyway, if you continue reading, you won’t regret…

“die weltt die will betrogen syn” (The world wants to be betrayed.)
– Sebastian Brant, The Ship of Fools

Sebastian Brant was born in Strasbourg as the first child of the Strasbourg councillor and innkeeper of the “Great Hostel to the Golden Lion” Diebolt Brant the Younger and his wife Barbara Brant, née Picker. His father died in 1468.[1] Nothing is known about Brant’s life until he began his studies in Basel in 1475. His life is generally divided into the Basel period (1475-1500) and the Strasbourg period (1500-1521) according to his two professional spheres of activity and residences. 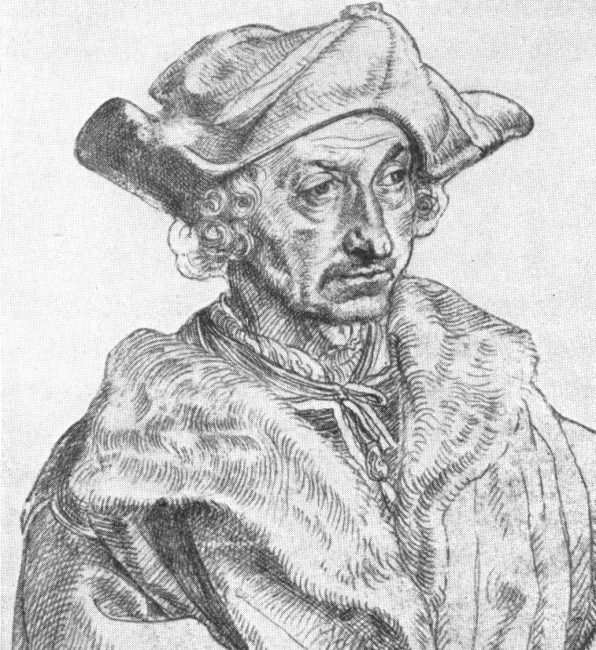 From Basel to Strasbourg

He obtained his bachelor’s degree in law in Basel in 1477/78, a few years later, in 1484, also a licentiate. Brant received his doctorate in 1489 as Doctor utriusque iuris and was since then a full member of the professorial council. Returning to Strasbourg, he was made syndic of the town, remaining there for the rest of his life. About his private life also only little is known. In 1485 he married Elisabeth Bürgis from Basel, the daughter of a cutler, and they had seven children. One anecdote about his life is concerned about the education of his eldest son, Onophrius. Brant wanted him to become a humanist and thus he started rather early with his education. Already in the cradle he taught him Latin and finally enrolled him in university at the age of seven. 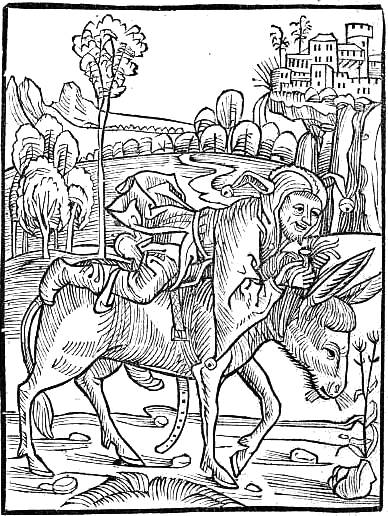 Albrecht Dürer, The Folly: Sebastian Brant, The Ship of Fools

Although, Brant attracted attention in humanistic circles by his Latin poetry as well as his ecclesiastical and legal works, he is best known by his famous satire, Das Narrenschiff (Daß Narrenschyff ad Narragoniam), published by Bergmann von Olpe in 1494, which attracted international popularity and influence. Let’s take a closer look at this unique piece of writing. The Ship of Fools was inspired by a frequent motif in medieval art and literature, and particularly in religious satire, due to a pun on the Latin word “navis”, which means a boat and also the nave of a church. Under the form of an allegory, a ship laden with fools and steered by fools goes to the fools’ paradise of Narragonia. In a prologue, 112 brief satires, and an epilogue, all illustrated with woodcuts, the book is notable for including the first commissioned work by the great Renaissance artist-engraver Albrecht Dürer.[4] In general, about two-thirds of the 114 illustrations in the 1494 edition are attributed to the young Dürer, while the rest, which are found inferior in design and cutting, are ascribed to anonymous masters. Much of the work was critical of the current state of the Church. Brant here lashes with unsparing vigour the weaknesses and vices of his time. One of his fictional characters is, e.g. Saint Grobian (St Ruffian), whom he imagines to be the patron saint of vulgar and coarse people.

A new St. Ruffian now holds sway,
Men celebrate him much today
And honour him in every place
With words and ways that spell disgrace,
And make a jest of ribaldry,
Though belted not with decency.
Sir Decency is doubtless dead,
Fool holds the sow’s ear, wags her head,
And makes the sow-bell loudly ring
So that the sow her ditty sing.

Brant is referring to human errors, misdemeanour, other vices and assorted follies undertaken by various fools. Each sin or vice in the book is accompanied by a finely detailed woodcut that gives either a literal or allegorical interpretation of that particular sin or vice. The book contains chapters to such offenses as Marrying for Money, Noise in Church, and Wanting to Escape Consequences of Evil.

The concept of foolishness was frequently used in the pre-Reformation period to legitimise criticism. Court fools, as e.g., were allowed to say much what they wanted. Thus, by writing the book in the voice of a fool, Brant was able to legitimize his criticism of the church and the society in general. The work immediately became extremely popular after publication and was translated in many languages. The Latin translation was published by Jacob Locher in 1497, the French by Paul Riviere in 1497 and by Jehan Droyn in 1498, the English by Alexander Barclay in 1509 and by Henry Watson also in 1509. Its popularity was such that it went through at least 21 editions between 1497 and 1572 in several European countries. 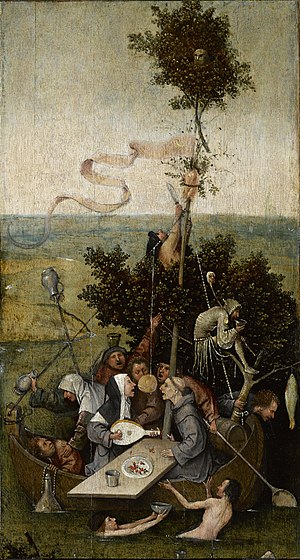 Also a famous allegorical painting by Hieronymus Bosch, The Ship of Fools, painted by Bosch around 1500 and put on display at the Louvre today, is considered too be influenced by Dürer’s frontispiece for the original book. Sebastian Brant was a devout loyalist to the Holy Roman Empire. He felt that the German people would need to cast off decadence and live in a highly moral fashion. To that end, his “Das Narrenschiff” was an attempt to reach the German people in their own language and use satire to encourage them to discard their sins and vices. The Ship of Fools is in many senses a multimedia work: it addresses both old and new forms of communication (the Messenger and Scribe on the one hand, the Printer and Book Market on the other), while it references oral traditions, as well as being a textual and pictorial work.

Brant moved to Strasbourg in the spring of 1501 and on 14 January 1501 took the place of a syndic.[1] After working for some time as a lawyer, syndic and diplomat, he was appointed town clerk and chancellor in 1502 and thus supreme administrative officer of the Free Imperial City of Strasbourg. In 1520 Brant travelled to Ghent, where he paid homage to the new emperor, Charles V, for the Free Imperial City of Strasbourg. Among Brant’s many other works was his compilation of fables and other popular stories, published in 1501 under the title Aesopi Appologi sive Mythologi cum quibusdam Carminum et Fabularum additionibus, the beauty of whose production is still appreciated. Though based on Heinrich Steinhöwel’s 1476 edition of Aesop, the Latin prose was emended by Brant, who also added verse commentaries with his characteristic combination of wit and style. The second part of the work is entirely new, consisting of riddles, additional fables culled from varied sources, and accounts of miracles and wonders of nature both from his own times and reaching back to antiquity.