You are here: Home › engineering › Richard Arkwright – the Father of the Industrial Revolution 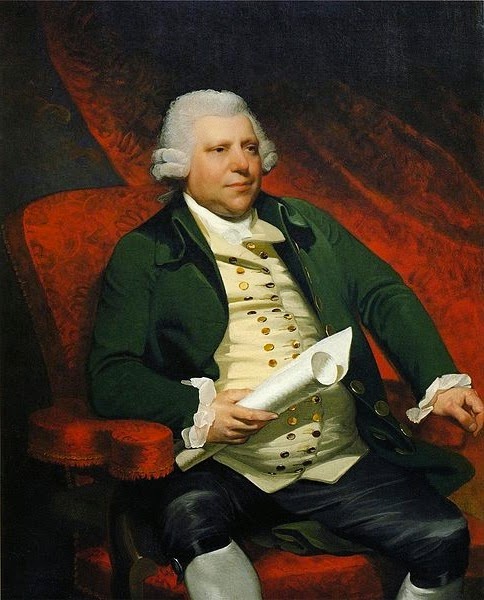 On August 3, 1792, Sir Richard Arkwright passed away. He was a self-made man and a leading entrepreneur during the early Industrial Revolution. Arkwright’s achievement was to combine power, machinery, semi-skilled labour and the new raw material (cotton) to create mass-produced yarn. His skills of organization made him, more than anyone else, the creator of the modern factory system. Later in his life Arkwright was also known as ‘the Father of the Industrial Revolution‘.

“Arkwright’s machines require so few hands, and those only children, with the assistance of an overlooker. A child can produce as much as would, and did upon an average, employ ten grown up persons. Jennies for spinning with one hundred or two hundred spindles, or more, going all at once, and requiring but one person to manage them. Within the space of ten years, from being a poor man worth £5, Richard Arkwright has purchased an estate of £20,000; while thousands of women, when they can get work, must make a long day to card, spin, and reel 5040 yards of cotton, and for this they have four-pence or five-pence and no more.”
– Ralph Mather (1780). An Impartial Representation of the Case of the Poor Cotton Spinners in Lancashire.

Richard Arkwright was educated by his cousin and later apprenticed to a barber. In the 1750s, he invented waterproof dye for wigs. He increased his interest in spinning and carding machinery that could turn raw cotton into thread. However, industrial production of cotton was not really possible back then. Lewis Paul invented a carding machine in 1748 that required a lot of human labor, while James Hargreaves’s spinning Jenny was suitable to produce only the weaker thread or the woof. Arkwright began working on an improved version of a spinning machine and along with the clockmaker John Kay, he was able to the water frame which produced a stronger length-wise thread [1,2].

In 1761  together with John Kay, Arkwright developed a spinning machine with automatic yarn feed, the Waterframe, which he applied for a patent in 1769. They used the model of a spinning machine by Thomas Highs as a model, but Arkwright himself introduced at least two innovations. It is said that he got Kay drunk and persuaded him to build two models of Highs’ inventions. Arkwright used these to persuade a relative in Preston to invest. To keep Kay away from Highs, who was unaware of all this, Arkwright hired the watchmaker and took him to Manchester, then to Liverpool and on to Preston. Here, two local craftsmen helped Kay build a large version of the water-powered spinning machine, which used three sets of rollers, tensioned at higher speeds and stretched the fibre strand before the thread continued to run and be twisted.

Arkwright had hired John Smalley and David Thornley to build his “Waterframe” before leaving for Nottingham in April 1768 to avoid the Lancashire machine breakers. They maintained a small factory in the Hockley district, near James Hargreave’s factory. Their machine was powered by horses. Arkwright had enough foresight to see this as only an interim solution. In view of the immense demand for yarn in the cotton industry (centred in Manchester and Lancashire), which could no longer be satisfied by traditional home-based work, he decided (following the example of the Lombe brothers) to build a factory. He brought in banker Ichabod Wright from Nottingham as an investor and the well-known businessmen Jedediah Strutt and Samuel Need. The trio formed a partnership, whereby Strutt and Need Arkwright took over all yarn production for their stocking knitting business. In 1771, two years after the invention of the waterframe spinning machine, Richard Arkwright, with the help of his investors, was able to build a large spinning mill in Cromford near Derby. It was driven by waterwheels. Thereby, they constructed the first successful water-powered cotton mill and presumably, the first modern factory in the world.

In addition, he also had houses built for the weavers, a school and a church, thus establishing an industrial community at the expense of the traditional social fabric (i.e. the small craftsmen and home workers were undercut in price, had to give up their independence and become wage labourers in the factories). The demand for yarn was so great that he was able to build a second spinning mill in Cromford in 1776. The second factory was forty metres long and seven storeys high. In Arkwright’s home “Rock House” in Cromford there was a single window in the wall of the house overlooking the workshops. With a view of the main courtyard and the workshop buildings, it gave the workers the feeling of being constantly watched by Arkwright – even when he was absent. Arkwright went on to improve the cotton production process and patented improved carding machine which along with other inventions enabled him to increase the production of high quality thread at a lower cost. Soon, he set up new mills throughout Britain and became one of the most successful entrepreneurs of the Industrial Revolution [1].

In the following period, the inventor and businessman had to face several accusations by contemporary inventors to have stolen their ideas and technologies. Arkwright lost his patent for the water frame and his carding machine from 1785. Still, he had been very well established in this field of business and was knighted by King George III in 1786 [1]. Only six years later, the inventor passed away as a very wealthy man. Even though he has been accused of stealing many ideas, it is no doubt that his status as a well established inventor and his contribution to the Industrial Revolution are significant. Samuel Slater later brought Arkwright’s manufacturing system to America and managed to build a water-powered cotton mill there, which was an important development in the industrialization of the US [1,2].

Arkwright was aware of his lack of schooling and when he was old he spent one hour a day studying English grammar and another hour improving his writing and spelling. In 1786 Arkwright was knighted and was allowed to call himself “Sir” from then on. He built himself the manor house “Willersley Castle”, which, however, was only completed after his death and bequeathed to his descendants, among others his son Richard Arkwright Junior (1755-1843) the then immense sum of 500,000 pounds.