You are here: Home › religion › Ninety-Five Theses that Changed the World 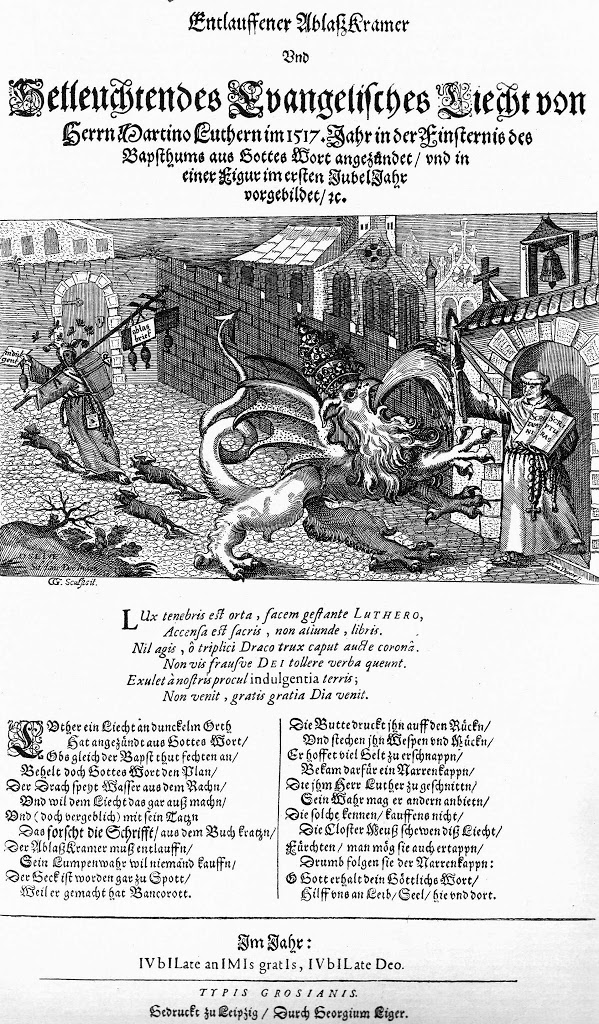 On the eve of All Saint’s Day, October 31, 1517, Martin Luther posted the ninety-five theses, which were part of his dissertation criticizing on practices within the Catholic Church regarding baptism and absolution, on the door of the Castle Church of Wittenberg, according to university custom. This event is widely regarded as the initial catalyst for the Protestant Reformation.

“The pope’s indulgence is not a gift from God in which people are reconciled with God, but only a forgiveness of the punishments imposed by the Church.”
– Martin Luther, The 95 Theses, 33-34 (1517)

We already dedicated a blog post to Martin Luther,[5] the iconic figure of Protestant Reformation. Today is the anniversary of his act of posting the ninety-five theses on the door of the Castle Church of Wittenberg, according to university custom. Just before, he had written to Albert of Mainz, the Archbishop of Mainz in Germany protesting against the sale of indulgences. He enclosed in his letter a copy of his “Disputation of Martin Luther on the Power and Efficacy of Indulgences,” which came to be known as The Ninety-Five Theses. Indulgences are nothing else but remissions of temporal punishment due for sins which have already been forgiven. The Catholic Church‘s practice of indulgences being sold was received as that the penance for sin simply represents a financial transaction rather than genuine contrition. No wonder that Luther argued in his Theses that the sale of indulgences was a gross violation of the original intention of confession and penance. Christians were being falsely told that they could find absolution through the purchase of indulgences.

Milk of the Virgin Mary

In 1517, Luther was a fellow at the University of Wittenberg, Saxony, in the Holy Roman Empire. Five years before in 1512, he had received his doctorate in theology and was received into the senate of the theological faculty of the University of Wittenberg. The All Saints’ Church in Wittenberg, where the Ninety-Five Theses famously appeared, held one of Europe’s largest collections of holy relics. At that time pious veneration of relics was purported to allow the viewer to receive relief from temporal punishment for sins in purgatory. By 1520 over 19,000 relics had been collected by Frederick III, Elector of Saxony, purportedly “including vials of the milk of the Virgin Mary, straws from the manger [of Jesus], and the body of one of the innocents massacred by King Herod.“

A Fund Raising Campaign for Saint Peter in Rome

As part of a fund-raising campaign commissioned by Pope Leo X to finance the renovation of St Peter’s Basilica in Rome,[6] Johann Tetzel, a Dominican priest and papal commissioner for indulgences, began the sale of indulgences in the German lands. With his famous slogan

“As soon as the coin in the coffer rings, the soul from purgatory [also attested as ‘into heaven’] springs“,

he rather successfully sold papal indulgences all over Germany. Roman Catholic theology stated that faith alone, whether fiduciary or dogmatic, cannot justify man; justification rather depends only on such faith as is active in charity and good works (fides caritate formata). The benefits of good works could be obtained by donating money to the church.

Albert of Mainz, the Archbishop of Mainz in Germany, had borrowed heavily to pay for his high church rank and was deeply in debt. He agreed to allow the sale of the indulgences in his territory in exchange for a cut of the proceeds. Luther was apparently not aware of this. Even though Luther’s prince, Frederick III, and the prince of the neighboring territory, George, Duke of Saxony, forbade the sale thereof in their respective lands, Luther’s parishioners traveled to purchase them. When these people came to confession, they presented their plenary indulgences which they had paid good silver money for, claiming they no longer had to repent of their sins, since the document promised to forgive all their sins. Luther was outraged that they had paid money for what was theirs by right as a free gift from God. He felt compelled to expose the fraud that was being sold to the pious people. 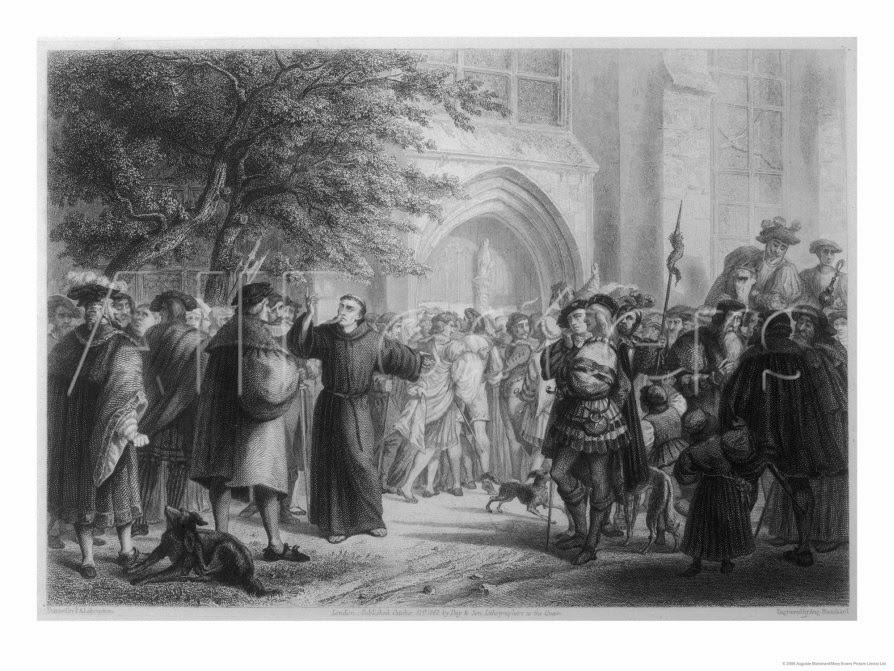 Luther Nails up his 95 Theses at Wittenberg, engraving by Auguste Blanchard, from Historic scenes in the life of Martin Luther (1862)

This exposure was to take place in the form of a public scholarly debate at the University of Wittenberg. The Ninety-Five Theses outlined the items to be discussed and issued the challenge to any and all comers. In particularly in Thesis 86, Luther asks:

“Why does the pope, whose wealth today is greater than the wealth of the richest Crassus, build the basilica of St. Peter with the money of poor believers rather than with his own money?“.

Luther insisted that, since forgiveness was God’s alone to grant, those who claimed that indulgences absolved buyers from all punishments and granted them salvation were in error. Christians, he said, must not slacken in following Christ on account of such false assurances.

The Initial Spark for the Protestant Reformation

While Luther’s theses had far-reaching impact leading to the Protestant reformation, the actual story of the posting of the theses on the church door, even though it has settled as one of the pillars of history, has little foundation in truth. The story is based on comments made by Philipp Melanchthon,[8] theological reformer and colleague of Luther, though it is thought that he was not in Wittenberg at the time. It was not until January 1518 that friends of Luther translated the 95 Theses from Latin into German, printed, and widely copied, making the controversy one of the first in history to be aided by the printing press. Within two weeks, copies of the theses had spread throughout Germany; within two months throughout Europe.

Andrew Pettegree, Martin Luther, the Reformation, and the Creation of a Media Phenomenon, [9]