You are here: Home › engineering › Karl Drais and the Mechanical Horse 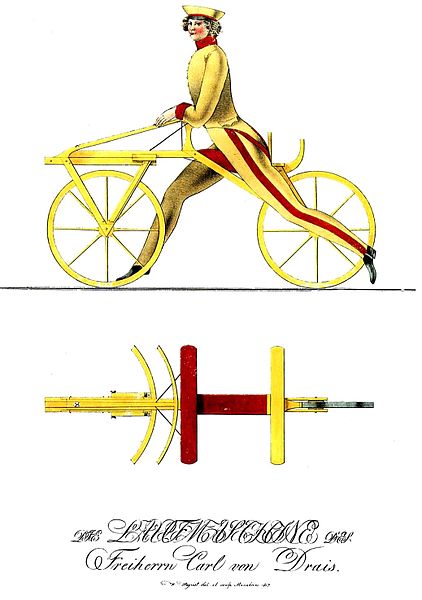 Karl Drais’ father was the Baden court and government councillor Karl Wilhelm Ludwig Friedrich von Drais von Sauerbronn, his mother Margarete Ernestine von Kaltenthal. Margrave Carl Friedrich von Baden took over his sponsorship. In 1790 the von Drais family moved from Sauerbronn to Kirchberg (Hunsrück) to the house of the Badische Gendarmerie, in 1794 in the course of the French Revolution to Durlach. His mother died in 1799. He attended the princely school in Karlsruhe, forerunner of today’s Bismarck-Gymnasium. Since his academic achievements, especially in Latin, were not the best, his father decided to have his son taught at his brother’s forestry school. From 1800 to 1803 he attended the private forestry school of his uncle Friedrich Heinrich Georg von Drais in Pforzheim. From 1803 to 1805 Drais studied architecture, agriculture and physics at the Ruprecht-Karls-Universität Heidelberg. From 1805 to 1807 Drais was transferred to the forestry office in Rastatt for the practical training of his forestry career, after which he was again taught at his uncle’s forestry school in Schwetzingen and after successfully passing his exam was employed pro forma in 1808 as a forestry inspector at the upper forestry office in Schuttern. In 1810 Drais was released from his duties as a Baden forestry foreman without a forestry office and from his job in order to pursue his activity as an inventor.

Drais’ inventions include, among others, a “formula for the general resolution of numerical equations of every degree” (1810), a “notation machine” (1812) which simultaneously wrote down the notes when playing the piano, a method of calculation called “Dyadic Characterism” with the basic numbers 0 and 1 (1813), an “improvement of the fire extinguishing institutions” (1813), a “carriage without horses” (1813), a “perspective of elevation” (1816), a “typewriter” with (only) four times four keys (1825), a “wood-saving stove” (1833) with a piping system, the system of which was adopted by distilleries, and a “cooking machine” (1834) 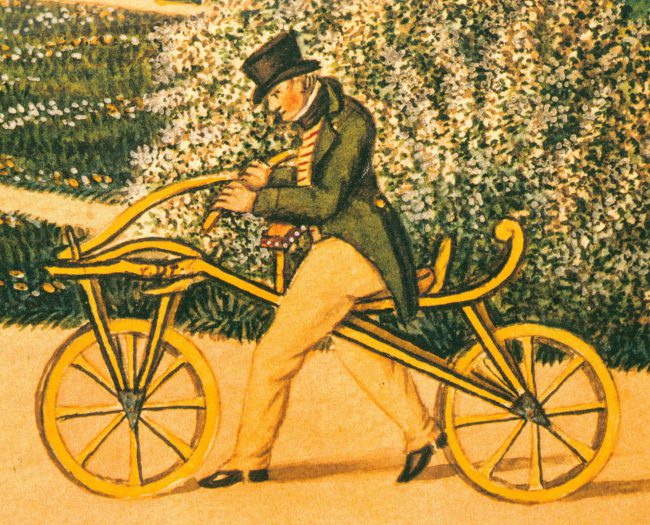 Karl von Drais on his original Laufmaschine, the earliest two-wheeler, in 1819

However, Karl Drais is rather known for inventing the Laufmaschine, also called running machine. Already in 1813, he developed a device equipped with four wheels, but unfortunately it was rejected by German officials. In 1816 the year without summer, also known as ‘Eighteen Hundred and Froze to Death‘ appeared after the volcanic eruption of Mount Tambora in Indonesia. Nearly all countries of the northern hemisphere suffered from hunger, bad harvests and illnesses. Many horses died because food became rare and expensive. As Hans-Erhard Lessing later proved, Karl Drais continued working on his running machine in 1816 to support the people who’s transportation depended on horses.

Drais’ invention of the two-wheel principle is considered a “genius flash” whose derivation from four-wheeled cars cannot be explained. Drais said that he had taken the idea of skating. The “treadmill” that originated from this idea had a wooden frame, two wooden wheels of the same size, the front of which could be controlled by a drawbar handle. It was driven by alternating pushing with the legs while the driver sat on a seat between the two wheels. The direction of travel was influenced both by the drawbar handle and by balancing the vehicle, i.e. without the feet touching the ground.

And indeed, his invention was quite successful and substituted for many the use of horses. The first ride on the ‘draisine’ became famous and he completed a distance of 7km with an approximated average speed of 15km/h. He began organizing public events where people tried out his machines and two years later, he was granted the patent (well, something comparable) for the Laufrad.

After some years, further inventions advanced the development of the bicycle as we know it today and Karl Drais began applying his mechanisms to rails. In 1842, he tested his mechanical rail-bicycle for the first time in Karlsruhe. Later versions of this inventions depicted for instance the hand-lever draisine, which became famous in animated movies or in Jules Verne’s ‘Around the World in Eighty Days‘. In Germany you can still ride all kinds of draisines since many shut down rails are used for Drais’ invention as tourism attractions.

Karl Drais is remembered as the remarkable inventor of the bicycle precursor. His hometown Karlsruhe followed the inventors’ example and became known as extraordinary bicycle friendly and Drais himself even was promoted the Roman Catholic Church’s patron of the cyclists. However, copies of the running machine appeared all over Europe, so that Drais was no longer able to sell copies at the beginning of the 1820s. After his return from Brazil (1827) and the death of his father (1830), he tried to achieve economic success through new inventions (including the oven and pipe). In 1834 he tried to get back into the official civil service, but the Mosbach forestry office refused. On 16 November 1835 Drais had to return his chamberlain’s key because of a pub brawl in Mannheim with the English art rider Belling. For Drais this meant “social death”.

In the asylum in Waldkatzenbach (from 1839) the forester was well pleased with the “great thirst” and worked for the village blacksmith. Back in Karlsruhe in 1845 Drais was already a sick man drawn by alcohol and a comic figure who became the victim of silly pranks. In the years 1848 and 1849 he was often invited by the guard to a bottle of wine when he drove past the town hall in Karlsruhe. In return, he had to drive down the stairs of the portal on his vehicle, which regularly resulted in the proverbial “Salto portale”. A procedure for incapacitation initiated in April 1850 was averted by his relatives. On 10 December 1851 at 5 p.m. Drais died in Karlsruhe, Zähringerstraße 43.[23] His estate was estimated at 30 guilders and 34 cruisers. Among them were a cooking machine, an oven model, a typewriter and a running machine.

A skateboard, with a boost | Sanjay Dastoor, [7]