You are here: Home › explorer › The Expeditions of John Wesley Powell 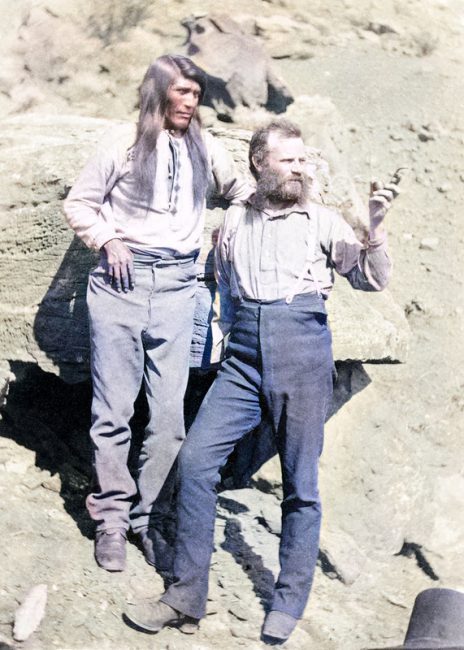 On March 24, 1834, American geologist and ethnologist John Wesley Powell was born. He published the first classification of American Indian languages and was the first director of the U.S. Bureau of Ethnology. He is famous for the 1869 Powell Geographic Expedition, a three-month river trip down the Green and Colorado rivers, including the first known passage through the Grand Canyon.

John Powell was born in Mount Morris, New York, in 1834. His family had emigrated from England four years prior and later on moved to Illinois. The young man studied at Illinois College, Illinois Institute, and Oberlin College. He also started teacherin but didn’t earn a degree. He learned Latin and Ancient Greek, but his main interest was devoted to natural sciences which was against the wished of his father. In 1860, Powell went on a lecture tour and realized that the American Civil War was starting, he began to study military science and engineering to prepare himself for the conflict. [1]

The Life of an Explorer

He explored Wisconsin, Illinois, Iowa, and the Iron Mountain regions of Missouri, collecting shells, minerals, and general natural history objects, which led to his election in 1859 to the secretaryship of the Illinois Natural History Society. It is said that, in 1856, the only 22 year old man descended the Mississippi by himself in a rowboat from the Falls of St. Anthony to its mouth, making collections on the way. 1857, he possibly rowed the whole length of the Ohio River from Pittsburg to its mouth, and in 1858 made a life trip down the Illinois River to its mouth and thence up the Des Moines . [2]

During the Civil War, John Powell as enlisted in the 20th Illinois volunteers in the position of second lieutenant. He took part in the battle of Shiloh, losing his right arm at Pittsburg Landing. However, Powell returned to the war and fought in the battles of Champion Hill and Black River Bridge. After the Civil War, John Powell left his service as Major and accepted the position of Professor of Geology and Curator of the Museum of the Illinois Wesleyan University at Bloomington. He also became connected with the Illinois Normal University and was widely known throughout the state by his lectures and addresses on scientific subjects. [2]

“The Grand Canyon, is a land of song. Mountains of music swell in the rivers, hills of music billow in the creeks, and meadows of music murmur in the rills that ripple over the rocks. Altogether it is a symphony of multitudinous melodies. All this is the music of waters. The adamant foundations of the earth have been wrought into a sublime harp, upon which the clouds of the heavens play with mighty tempests or with gentle showers.”
— John Wesley Powell (1895), in [8]

On May 24, 1869, John Powell and nine further men left for a 10 months journey into the Rocky Mountains and around the Green and Colorado rivers. With four boats, they set out from Green River, Wyoming, passing down the Green River to its confluence with the Colorado River near present-day Moab, Utah, and completed the journey on August 30, 1869. After only one month in the expedition, one man already quit and three further men left at Separation Canyon during the third month. Unfortunately, these three men disappeared, which remains a mystery up to this day. In 1871, John Powell retraced part of the 1869 route with another expedition traveling from Green River, Wyoming to Kanab Creek in the Grand Canyon. As a result of the expedition, photographs have been published along with maps and papers. However, it was noticed that these maps were not too precise. In preparation of the expedition, Jacob Hamblin, a Mormon missionary in southern Utah and northern Arizona was employed. He was known to have developed good relationships with Native Americans. He was asked by Powell to work as a negotiator in order to ensure their safety from local Native American groups. Powell mentioned that he believed the three missing men were killed by the Native Americans due to mistaken identities. John Powell’s subsequent geological descriptions of the explored region introduced an entire new branch of geology called geomorphology.[1,2] 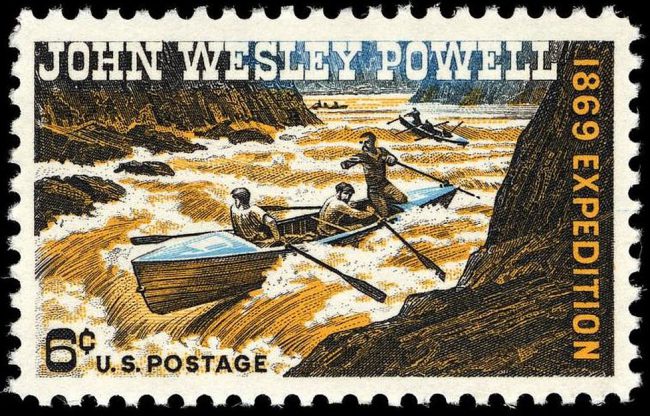 John Wesley Powell was honored on a U.S. commemorative stamp in 1969.

In his publications, Powell described his theories of the role of stream flows in wearing down mountains and creating river valleys, which established him as a nationally recognized geologist. Due to his recognition and his ability to talk with politicians, Powell was appointed the second director of the United States Geological Survey in 1881. However, it is believed that due to his insistence on putting truth before politics eventually earned him powerful enemies. Some of his enemies were very eager to exploit the natural resources of the West, objecting to Powell’s insistence on understanding the natural science of the region before developing it. John Powell was pushed out of his position in 1894 and continued his scientific work within the Bureau of American Ethnology. [1]

“In Ute the name for bear is “he seizes,” or “the hugger.” In this case the verb is used for the noun, and in so doing the Indian names the bear by predicating one of his characteristics. Thus noun and verb are undifferentiated.”
— John Wesley Powell (1880), [10]

As an ethnologist and early anthropologist, Powell was a follower of Lewis Henry Morgan. He classified human societies into “savagery,” “barbarism” and “civilization”. Powell’s criteria were based on consideration of adoption of technology, family and social organization, property relations, and intellectual development. In his view, all societies were to progress toward civilization. Powell is credited with coining the word “acculturation“, first using it in an 1880 report by the U.S. Bureau of American Ethnography. Powell was a champion of land preservation and conservation. It was his conviction that part of the natural progression of society included making the best use of the resources. Powell held a post as Lecturer on the History of Culture in the Political Science department at the Columbian University in Washington, DC from 1894–1899.