You are here: Home › psychology › Jean Piaget and Genetic Epistemology 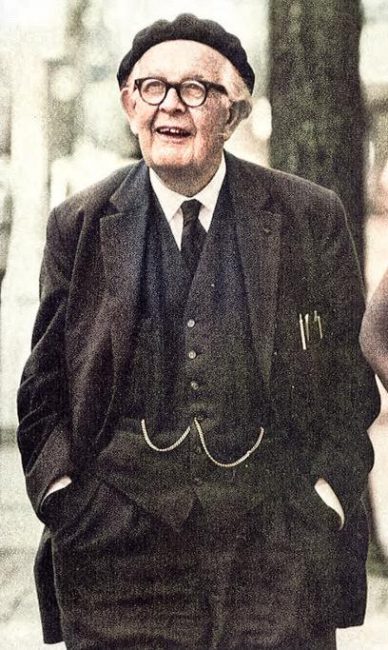 On August 9, 1896, Swiss developmental psychologist and philosopher Jean Piaget was born. He is best known for his epistemological studies with children. In 1934, he declared that

“…only education is capable of saving our societies from possible collapse, whether violent, or gradual.”

Piaget created the International Center for Genetic Epistemology in Geneva in 1955 and directed it until his death in 1980. The number of collaborations that its founding made possible, and their impact, ultimately led to the Center being referred to in the scholarly literature as “Piaget’s factory.”

Jean Piaget was born in Neuchâtel, in the Francophone region of Switzerland on August 9, 1896, as the oldest child of Arthur Piaget, a professor of medieval literature at the University of Neuchâtel, and of Rebecca Jackson. Piaget was a precocious child who developed an interest in biology and the natural world. When Piaget was just 10 years old, his fascination with mollusks drew him to the local museum of natural history, where he stared at specimens for hours on end. At age 11, while he was a pupil at Neuchâtel Latin high school, he wrote a short notice on an albino sparrow. This short paper is generally considered as the start of a brilliant scientific career made of over sixty books and several hundred articles. His early interest in zoology earned him a reputation among those in the field after he had published several articles on mollusks by the age of 15.

The Cognitive Processes of Children

After High School graduation he studied natural sciences at the University of Neuchâtel, where he obtained a Ph.D. During this time, Piaget published two philosophical papers that showed the direction of his thinking at the time, but which he later dismissed as adolescent thought. His interest in psychoanalysis can also be dated to this period. After another semester at the University of Zürich, Piaget moved to Paris, France and taught at the Grange-Aux-Belles Street School for Boys. The school was run by Alfred Binet, the developer of the Binet intelligence test, and Piaget assisted in the marking of Binet’s intelligence tests.[5] It was while he was helping to mark some of these tests that Piaget noticed that young children consistently gave wrong answers to certain questions. Piaget did not focus so much on the fact of the children’s answers being wrong, but that young children consistently made types of mistakes that older children and adults did not. This led him to the theory that young children’s cognitive processes are inherently different from those of adults. Ultimately, he was to propose a global theory of cognitive developmental stages in which individuals exhibit certain common patterns of cognition in each period of development.[1]

The Four Stages of Mental Development

In 1921, Piaget returned to Switzerland to become director of studies at the J.-J. Rousseau Institute in Geneva at the request of Sir Ed. Claparède and P. Bovet. Piaget was familiar with many of Claparede’s ideas including that of the psychological concept ‘groping’ which was closely associated with ‘trials and errors’ observed in our mental patterns. In 1923, Piaget married Valentine Châtenay, with whom he had three children, Jacqueline, Lucienne and Laurent. Of course Piaget used the opportunity to study the intellectual development of his children firsthand from infancy to language. From 1925 to 1929 Piaget was professor of psychology, sociology, and the philosophy of science at the University of Neuchatel. Over the course of his six-decade career in child psychology, Piaget also identified four stages of mental development, called Schema. The first is the “sensorimotor stage,” which involves learning through motor actions, and takes place when children are 0–2 years old. During the “preoperation stage,” children aged 3–7 develop intelligence by using their natural intuition. During the “concrete operational stage,” children 8–11 develop cognitively through the use of logic that is based on concrete evidence. “Formal operations,” the fourth and final stage, involves 12-to-15-year-olds forming the ability to think abstractly. Piaget called his collective theories on child development “Piaget’s Genetic Epistemology.” [2]

In 1929, Jean Piaget accepted the post of Director of the International Bureau of Education and remained the head of this international organization until 1968. Piaget also had a considerable effect in the field of computer science and artificial intelligence. Seymour Papert used Piaget’s work while developing the famous Logo programming language that was intended especially for children.[6] Alan Kay, a pioneer in computer graphics, used Piaget’s theories as the basis for the Dynabook programming system concept, which was first discussed within the confines of the Xerox Palo Alto Research Center, or Xerox PARC and led to the development of the Alto prototype, which explored for the first time all the elements of the graphical user interface (GUI), and influenced the creation of user interfaces in the 1980s and beyond. Piaget continued working on a general theory of structures and tying his psychological work to biology for many more years. Likewise, he continued his public service through UNESCO as a Swiss delegate. By the end of his career, he had written over 60 books and many hundreds of articles. He died in Geneva, September 16, 1980, one of the most significant psychologists of the twentieth century [3].

Basically, there are three types of criticism of Piaget’s theory. On the one hand it is directed against Piaget’s method and on the other against his classification of cognitive development into stages. Many experiments have been carried out to show that children have abilities at a stage X of development which, according to Piaget, they should not have until stage Y. Another more fundamental criticism is directed against the circular procedure of using all of Piaget’s research examples as evidence of his (epistemological) development principle, by assuming basic genetic principles, which Piaget assumes to be the abstract totality of the cosmos: Piaget presents his work as a reciprocal relationship between his experiments and his model of development. He assumes that the results of individual development steps are necessary because they follow a genetic development principle. The abstract and functionally conceived adaptation is defined as the reason for all the individual learning steps that children take – i.e. it is not derived from the experiments. If Piaget, without knowing the result of a learning step, had to explain a certain result to children’s thinking by means of the concept of adaptation, he would constantly come across various possibilities, the differences between which could be explained. In the abstraction of equilibrium – beyond certain contents – he can classify every result of learning, because he has eliminated every possible contradiction by definition and beforehand in the abstraction of his principle of equilibration. Equilibrium is then always exactly the state that was already known as the result of each particular learning step. The theoretical concepts thus give the development a name in order to express formally the necessity of the learning step. They do not explain it in this way. In this way, Piaget makes his theory independent of the results of his research. He transfers his observations to his abstractions. All his observations now fit together without the abstract categories, which Piaget named and explained as the reason for his development, having to be related to experiments or observations. As a pattern of interpretation, the theory plausibilizes the postulated necessity of arbitrary developmental steps