You are here: Home › philosophy › Herbert Spencer and Social Darwinism 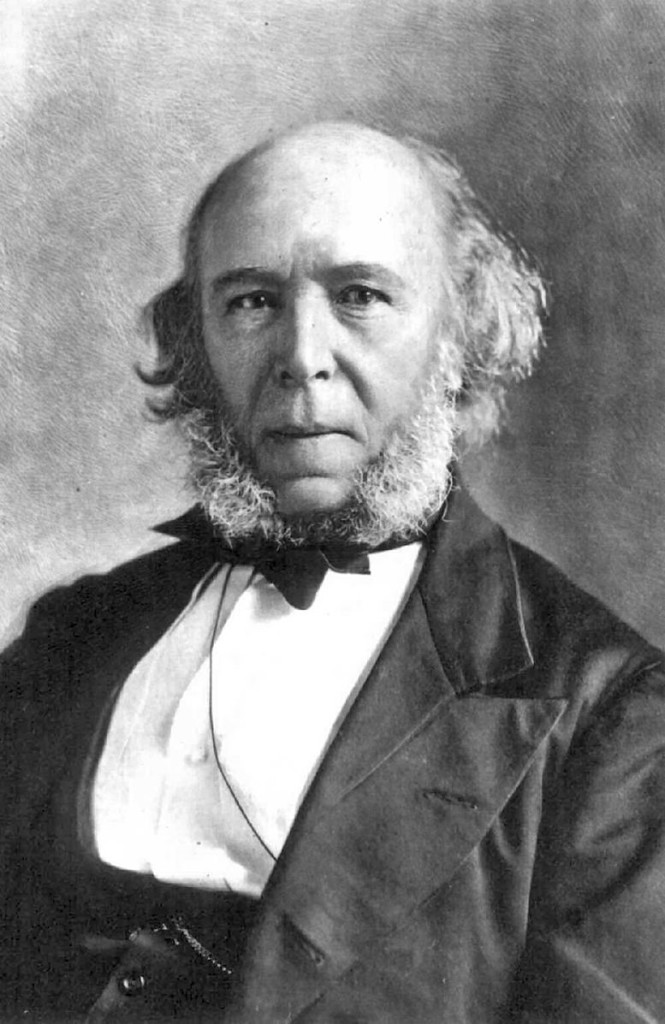 On April 27, 1820, English philosopher, biologist, anthropologist, sociologist, and prominent classical liberal political theorist of the Victorian era Herbert Spencer was born. Spencer is best known for the expression “survival of the fittest“, which he coined in Principles of Biology (1864), after reading Charles Darwin‘s On the Origin of Species.[4] This term strongly suggests natural selection, yet as Spencer extended evolution into realms of sociology and ethics, he also made use of Lamarckism.[5] Spencer developed an all-embracing conception of evolution as the progressive development of the physical world, biological organisms, the human mind, and human culture and societies. During his lifetime he achieved tremendous authority, mainly in English-speaking academia.

“The truth is, that those who have never entered upon scientific pursuits know not a tithe of the poetry by which they are surrounded.”
– Herbert Spencer, Lectures on Education delivered at the Royal Institution of Great Britain, London, 1855

Spencer was born in Derby, England, the son of William George Spencer (generally called George), a religious dissenter. Herbert Spencer was educated partly by his father and partly by members of the Derby Philosophical Society who introduced him to pre-Darwinian concepts of biological evolution. Reverend Thomas Spencer, Herbert Spencer’s uncle, then completed Spencer’s limited formal education by teaching him some mathematics and physics, and enough Latin to enable him to translate some easy texts.

The Framework of General Biology

Spencer was known to work quite interdisciplinary, being occupied as a civil engineer during the 1830s as well as writing for provincial journals. About a decade later, Spencer served as sub-editor on the free-trade journal The Economist, during which time he published his first book, Social Statics (1851), which predicted that humanity would eventually become completely adapted to the requirements of living in society with the consequential withering away of the state. Spencer met influential characters including John Stuart Mill, Harriet Martineau, George Henry Lewes and Mary Ann Evans. His friendship with Evans and Lewes resulted in his second book, Principles of Psychology. It was founded on the assumption that the human mind was subject to natural laws and that these could be discovered within the framework of general biology.[6]

The System of Synthetic Philosophy

“All evil results from the non-adaptation of constitution to conditions. This is true of everything that lives.”
– Herbert Spencer, Social Statistics (1851)

In 1858, Herbert Spencer produced an outline of what was to become the System of Synthetic Philosophy. He intended to demonstrate that the principle of evolution applied in biology, psychology, sociology and morality. Around 1860 Spencer began his life’s work: the synthesis of all human knowledge, related to an omnipresent principle that works in all living things: evolution. According to Spencer, only the laws of evolution allow the structuring and integration of empirical data from all physical, social and psychological fields of science under one principle; therefore evolutionism represents the first scientifically founded world view. As an enthusiastic supporter of Darwinism, he believed he could apply the principle of evolution in all sciences and thus unite them into a “system of synthetic philosophy”. Spencer was convinced that she had found an important key to her understanding in the self-organizing genesis of things. The starting point that things in the world develop without divine (or other) control and that something “more complex” or “higher” emerges from “simplicity” was revolutionary for his time.

Many people know Herbert Spencer best for his theory on Social Darwinism. It applies the law of survival of the fittest to society. This means that humanitarian impulses had to be resisted as nothing should be allowed to interfere with nature’s laws, including the social struggle for existence. In biology, the competition of various organisms can result in the death of a species or organism. Spencer advocated this kind of competition to be closer to the one used by economists, where competing individuals or firms improve the well being of the rest of society. According to Spencer, social development is similar to that of a biological organism. Controlled by the invisible hand of evolution, that which best contributes to the survival of the organism prevails in the long term. In this process, the unadapted, i.e. the socially weaker, stands in the way of society’s progress.

Finally, Spencer developed a general philosophy in his further principles, based on the various previously developed theories of evolution: the entire universe functions like a gigantic organism, which leads with time to an increasingly harmonious coordination of the individual components. Like Comte before, Spencer found the same development not only for the whole, but within each component.

In 1902, shortly before his death, Spencer was nominated for the Nobel Prize for literature. Politically, Spencer was firmly rooted in classical liberalism, which was reflected above all in his late work. Spencer tried to unite all the knowledge of his time in a “system of synthetic philosophy”. Unlike later Social Darwinists, Spencer was firmly rooted in liberalism. Based on his Protestant ethics, he postulated the Law of Equal Freedom (LEF) that a person has all freedom as long as he does not interfere with the freedom of another. Both for these ethical reasons and because they contradicted the logic of evolution, Spencer rejected any intervention of the state in human society. In his most political work, The Man Versus the State, he consistently went so far as to demand the right of every individual to secession from the state. He continued writing all his life, in later years often by dictation, until he succumbed to poor health in 1903 at the age of 83.