You are here: Home › engineering › Herman Hollerith and the Mechanical Tabulator 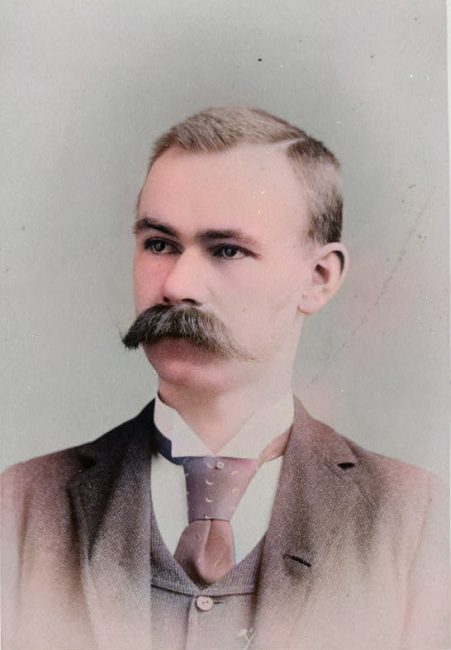 On February 29, 1860, American statistician and inventor Herman Hollerith was born. He is best known for his invention of the mechanical tabulator based on punchcards to rapidly tabulate statistics from millions of pieces of data. He was the founder of the Tabulating Machine Company that later merged to become IBM. Hollerith is widely regarded as the father of modern automatic computation.

Herman Hollerith  and the Idea for the Punchcard

Herman Hollerith was born in Buffalo, New York, where he spent his early childhood. His parents came from Großfischlingen (near Landau/Palatinate); they had emigrated to the USA with their two daughters after the Palatinate Revolt. Father Johann Georg Hollerith (* on September 18, 1808 in Großfischlingen) had taught ancient languages at the Gymnasium Speyer until 1848. Hollerith entered the City College of New York in 1875 and graduated at age 19 from the Columbia University School of Mines with an “Engineer of Mines” degree in 1879. In 1880 he listed himself as a mining engineer while living in Manhattan. Hollerith worked on the 1880 US census, a laborious and error-prone operation that cried out for mechanization. This experience, along with some advice from mentor John Shaw Billings, convinced him that the Census Office desperately needed a better way to tabulate census data than hand counting. Herman Hollerith first got his idea for the punch-card tabulation machine from watching a train conductor punch tickets. What the train conductors did was that they punched the train tickets at different on specific positions to distinguish features of the ticket holder, such as gender, color, or age. The idea was to prevent the tickets being reused by other persons than the original passenger. Thus, encoding information by the position of a punch hole on a card, the same idea that was used in the early 1800s to control a Jacquard loom, an automatic weaving machine that is controlled by specially coded punch cards.[5]

Hollerith’s mentor Billings suggested a device similar to the Jacquard loom might be used to automate the census count. Meanwhile, he joined the Massachusetts Institute of Technology in 1882, where he taught mechanical engineering Hollerith seized on the idea of punch cards, designing a machine that used the location of holes on each card to tally not only overall numbers but also individual characteristics and even cross-tabulations. After some initial trials with paper tape, he settled on punched cards and designed special equipment — a tabulator and sorter — to tally the results. He tested his new machine in Baltimore in 1887, the same year the hand-counted 1880 census was finally completed, and was successful enough that he won a contract from the Census Office when it reopened for the 1890 census.

Hollerith’s electric counting machines were a great success. They appreciably reduced tabulation time for the 1890 census while providing more statistics at a lower cost for processing. Actually, it saved the 1890 taxpayers five million dollars, and earned Hollerith an 1890 Columbia PhD, as a description of this system, An Electric Tabulating System (1889), was submitted by Hollerith to Columbia University as his doctoral thesis. His success in 1890 led to contracts with foreign governments, eager to use his devices. Hollerith’s machines reduced a ten-year job to three months. This was the first wholly successful information processing system to replace pen and paper. Hollerith machines were used in 1891 for censuses of Canada, Norway, and Austria; railroad companies used them to calculate fare information.

In 1896, Hollerith formed the Tabulating Machine Company, opening a shop in the Georgetown neighborhood of Washington, DC. He provided machines for the 1900 census count, but had greatly raised his leasing prices, which led the Census Bureau in 1902 to explore other options. After a former US Census Bureau technician James Powers was able develop a more advanced version of Hollerith’s machine, he started his own machine tabulation company and Hollerith’s company, which had changed its name to the Computer Tabulating Recording Company after a merger, was practically run out of the market. In 1911, Hollerith finally sold his company for about $1.21 million, as well as a ten-year consulting contract that paid $20,000 a year.

In 1918, Thomas J. Watson, an accomplished salesman, joined the Computer Tabulating Recording Company as an executive and revolutionized the way the company was run and transformed it into a successful enterprise once again. Although Hollerith worked with the company as a consulting engineer until his retirement in 1921, he became less and less involved in day-to-day operations after Watson came on board. Hollerith retired to his farm in rural Maryland, where he died of a heart attack in 1929. As for the Computer Tabulating Recording Company, in 1924, the resurgent enterprise changed its name to the International Business Machines Corporation, or IBM. By 1933 The Tabulating Machine Company name had disappeared as subsidiary companies were subsumed by IBM.