You are here: Home › history › The Flying Serpent of Henham

Woodcut of the Henham Dragon, published 1669 in the pamphlet “The Flying Serpent, or: Strange News out of Essex”

On May 27 and 28, a mystical dragon creature was allegedly seen in the village of Henham in Uttlesford, Essex, ever since referred to as “The Flying Serpent of Henham“. The dragon was described as some sort of a a winged snake, that attacked several people and then hid in the nearby woods.

The first sighting is probably published in ‘The Flying Serpent or Strange News Out of Essex‘ in 1669. The article described the following:

“The place of his abode and where he hath been oftentimes seen, is called Henham, but most commonly Henham on the Mount, the town standing upon a hill, having many fair farms and granges belonging to it, in one of which named The Lodge, near to a wood called Birch-wood, by reason of the many birches growing there, in a pasture-ground close by the same, hath this monstrous serpent been often seen as he hath lain upon the sides of a bank, beaking and stretching himself out upon the same, at such time as Sol did parch the earth with his resulgent beams.”

It was further said that the dragon surprised a man on his horse, who then fled into the village. Two further men are said to have witnessed the appearance of the creature but were too afraid to attack it. It is then told that the dragon fled into the woods where the local farmers hoped to kill it. However, the message ends at this point. The dragon of Henham was describes as approximately 2-3 meters long with eyes, big white teeth, and small wings. However, it apparently could not fly. Further sightings allegedly occurred throughout the summer. 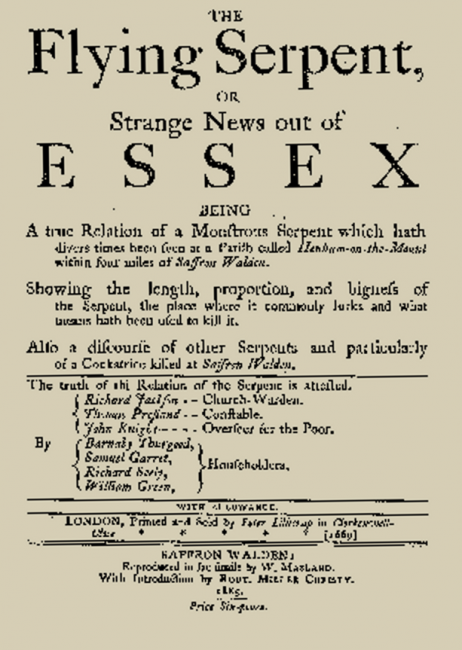 The Flying Serpent, OR Strange News out of ESSEX BEING A true Relation of a Monstrous Serpent which hath divers times been seen at a Parish called Henham-on-the-Mount within 4 miles of Saffron Walden. Showing the length, proportion and bigness of the Serpent, the place, where it commonly lurks, and what means hath been used to kill it. Also a discourse of other Serpents, and particularly of a Cocatrice killed at Saffron Walden.

The story of the Dragon of Henham is one of a series of alleged sightings of dragons or giant snakes in Sussex and Essex. In addition to the flying snake, the pamphlet also contains reports of other snakes and a basilisk that was allegedly killed in nearby Saffron Walden, where the work also appeared.

The legend of the Dragon of Henham became very popular just a short time after the publication of the pamphlet. In May 1674, five years after the publication of the pamphlet, Saffron Walden is said to have organized the Henham Fair, a folk festival at which the villagers sold small statues of the dragon. This festival lasted 265 years, until the outbreak of World War II in 1939, and local breweries sold a beer called snakebite (not to be confused with the Snakebite beer-cider mixture), which was reported at Robin′s Almanack 1674. However, here too there is uncertainty: neither the historian Ralph Whitlock in the 1970s, nor his colleague George Monger in the early 1990s succeeded in finding local testimonies for the folk festival or the beer brand.

During the late 1990s, the freelance writer and broadcaster Alison Barnes published a booklet entitled ‘The Ingenious William Winstanley‘. It is believed that William perpetrated the Henham Dragon Hoax of 1668 when they “created a hollow nine-foot wood and canvas dragon or “flying serpent” activated by a man which made fleeting appearances in and around Birch Wood, Henham throughout that summer and caused great excitement and mystification in the neighbourhood.” Further, William is supposed to have anonymously written the pamphlet describing the dragon’s visit which is vouched for by a churchwarden, a constable and five other solid citizens.

The sign of Henham shows a winged dragon as well as the village magazine, the Dragon Magazine. In the London district of Covent Garden, there was a pub for a long time called The Essex Serpent. In the 18th century it was replaced by shops, but later reopened and can still be visited today.