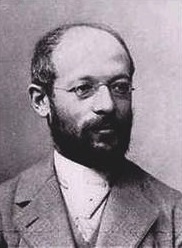 On March 1, 1858, German sociologist, philosopher and critic Georg Simmel was born. Along with Max Weber and Emile Durkheim, Simmel was one of the first generation sociologists, questioning the definition of society, nature, and culture.

“That man overcomes himself means that he reaches out beyond the bounds that the moment sets for him. There must be something at hand to be overcome, but it is only there in order to be overcome. Thus even as an ethical agent, man is the limited being that has no limit.”
– Georg Simmel, The View of Life (1918)

Georg Simmel was born in Berlin as the youngest of seven children in a Berlin merchant family. The education by the mother was primarily Christian. When his father died in 1874, Julius Friedländer (1827-1882), a friend of the family, was appointed as his guardian. He later adopted Georg and left him a fortune that made him economically independent. After graduating from high school in 1876 at the Friedrichwerderschen Gymnasium in Berlin, he studied history, people psychology, philosophy, art history and ancient Italian in the minor subjects at the Friedrich-Wilhelms-Universität Berlin. In 1881, he received his doctorate with the prize-winning work on Kant’s concept of matter, “Die Natur der Materie nach Kants Physikalischer Monadologie” (The Nature of Matter According to Kant’s Physical Monadology), dating from 1880, after a dissertation on music ethnology “Psychological-Ethnic Studies on the Beginnings of Music“, originally intended as a dissertation work, had been rejected. In 1885, he habilitated with a thesis on “Kant’s Teaching of Space and Time“.

From 1885 he was a private lecturer in philosophy at the Friedrich-Wilhelms-Universität Berlin. His main topics were logic, philosophy of history, ethics, social psychology and sociology. He was a very popular lecturer with a broad, thematically highly interested audience. But even though Simmel’s lectures were highly popular in the University and beyond and his friend Max Weber supported him,[6] he was not able to establish himself as an official lecturer at the university.  It was not until 1900, when Simmel was more likely to be regarded as an inevitable formal act, that he was appointed to the University of Berlin, albeit only for an unpaid extraordinary professorship in philosophy. He was also denied the right to take an examination. In 1908 he was unable to accept an appointment at the University of Heidelberg due to an anti-Semitic expert opinion by the historian Dietrich Schäfer, despite the intercession of Max Weber.

The Definition of Sociology

Often the scientific community mocked Simmel for the reason that his articles were written for the general public instead of a scientific audience. On the other hand, this made Simmel so famous. Not only in Germany, but also across Europe and America his writings were highly appreciated and he became one of the most influential of his field of research. Simmel was one of the philosophers who start from pre-determined ideational categories of knowledge that progress through the selection of evolution, in the wake of which the individual also evolves. However, a human being cannot grasp the totality of life through mere thinking. In 1892, his work “Einführung in die Wissenschaft der Ethik” (Introduction to the Science of Ethics) appeared, and in 1894, in a programmatic essay entitled “Das Problem der Soziologie” (The Problem of Sociology), he defined sociology as the science of the processes and forms of interaction of societies.

The German Society for Sociology

Along with Max Weber and Ferdinand Tönnies, Georg Simmel founded the German Society for Sociology. In 1911 he was awarded an honorary doctorate in political science from the Albert Ludwigs University of Freiburg for his merits in extending his knowledge of economics and in recognition of his achievements as one of the founders of sociology. In 1914, Simmel received an ordinary professorship with chair, at the then German University of Strassburg, but did not feel at home there. Because World War I broke out, all academic activities and lectures were halted and lecture halls were converted to military hospitals. In 1915 he applied – without success – for a chair at the University of Heidelberg. He did not survive the war and died in 1918 due to cancer.

According to Simmel, sociology is an eclectic science – unlike its first sociological predecessor, Tönnies. For him, this means that she has no specific object of her own, but merely uses the material provided by other sciences in order to obtain new syntheses and a new point of view. She works with the results of historical research, anthropology, statistics, psychology and many other subjects. In doing so, it does not use the original material of these sciences, but synthesizes from what has already been created from synthesis. As a task of sociology, he considers the description of the forms of human coexistence as well as the finding of rules according to which the individual behaves in a sociological way.

To Simmel’s most important works belongs the essay ‘The Metropolis and Mental Life‘ from 1903, which originated in a lecture series on the city by Simmel. Even though this work counts as one of Simmel’s most significant, it was not very well received in his lifetime. When exhibited at the Dresden cities exhibition of 1903, the exhibitors mainly focused on Simmel’s negative comments on city life rather than pointing out his positive arguments. Still, the essay reached a great audience and critically influenced the ‘Chicago School‘ of sociology in the 1920s and ‘30s. In the middle of the 20th century, it was translated into English and published as part of the collection ‘The Sociology of Georg Simmel‘, still taught in most sociology classes in Europe. However, it made Simmel to become the founder of urban sociology. His essay was not particularly noticed in Germany at first, but had a direct influence on sociology in the USA.

The Philosophy of Money

‘The Philosophy of Money‘ (1900) depicts Simmel’s major work, in which he defines money as an important part of human lives helping us to understand life’s totality. The work is also linked with his ideas on city life. According to Simmel, city life is responsible for the division of labor and the increase of financialization. In his means, it then becomes more important what a person can do rather than who the person really is as a consequence to these increasing financial transactions. His work caused very diverse reactions and often, Simmel has been misinterpreted during his lifetime. Simmel developed the thesis that money had more and more influence on society, politics and the individual. The spread of the money economy had brought people numerous advantages, such as the overcoming of feudalism and the development of modern democracies. However, in modern times money has become more and more an end in itself. Even people’s self-esteem and attitudes to life are determined by money.

His statement: “Money becomes God by becoming an absolute means to an absolute end” is illustrated by Simmel by a concise example:

“The banks are now larger and more powerful than the churches. They have become the centre of cities. Everything perceptible in the senses has to do with money. Man, however, has the freedom to strive for dimensions that are more than money. This can be done through the formation of communities of solidarity that deal with the spiritual life. Action can limit the power of money, for example in culture. Thus an artist works not only for the sake of money, but also to realize himself spiritually in his work.”

Parallel to Leopold von Wiese, Simmel was a co-founder of formal sociology. The aim of formal sociology is to reduce the number of social phenomena to a minimum. Less importance is attached to content. It deals in particular with social connections and their relationships, for example hierarchies in different social structures such as family, state, etc.

Georg Simmel counts as one of the most important sociologists of all times and influenced not only colleagues of his time, like Max Weber, he also left much to discuss for later researchers on the field like Jürgen Habermas [5] or Erving Goffman.