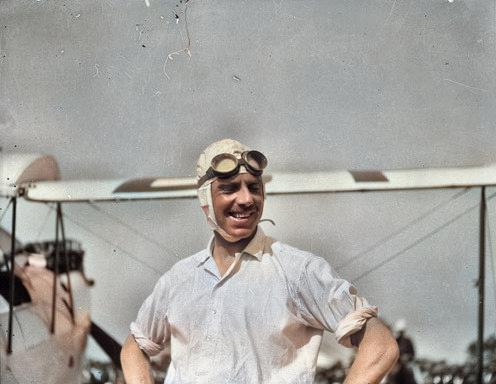 On July 27, 1882, British aviation pioneer and aircraft engineer Sir Geoffrey De Havilland was born. In 1909, he constructed his first machine and through trial and error and taught himself to fly. His Mosquito has been considered the most versatile warplane ever built. In 1943, he was one of the first to make jet-propelled aircraft, producing the Vampire jet fighter. De Havilland led the world in entering the era of jet passenger flight with its first turbine powered aircraft, the Comet in 1949.

From Automotive Engineering to Aviation

Geoffrey De Havilland attended the Crystal Palace School of Engineering and later pursued a career in automotive engineering, building cars and motorcycles. He was apprenticed with the engine manufacturers Willans & Robinson of Rugby and worked as a draughtsman for The Wolseley Tool and Motor Car Company Limited in Birmingham. Further, de Havilland worked at the design office of Motor Omnibus Construction Company Limited in Walthamstow and designed his first aero engine there.

With Borrowed Money From his Grandfather

For his first aircraft, de Havilland borrowed money from his grandfather. It took about two years to build and during the first test flight at Seven Barrows near Litchfield, Hampshire it crashed. The next plane by de Havilland flew near Newbury in 1910. About two years later, the engineer established a new British altitude record of 3.2 km in an aircraft of his design.

In 1910, Geoffrey de Havilland joined HM Balloon Factory at Farnborough, which was to become the Royal Aircraft Factory. Geoffrey De Havilland sold his second aeroplane to his new employer for £400 and it became the F.E.1, the first aircraft to bear an official Royal Aircraft Factory designation. In the beginning of 1914, de Havilland was appointed an inspector of aircraft for the Aeronautical Inspection Directorate and was recruited to the chief designer at Airco, in Hendon during the same year. De Havilland designed many aircraft for Airco. A great amount of de Havilland-designed aircraft were used during the First World War, flown by the Royal Flying Corps and later the Royal Air Force.

From the Tiger Moth to the Vampire

As Airco was purchased by the BSA Company, the new firm went into a different direction. In 1920, de Havilland formed the De Havilland Aircraft Company at Stag Lane Aerodrome, Edgware, where he and his company designed and built a large number of aircraft, including the Moth family. One of de Havilland’s roles was as test pilot for the company’s aircraft. He was believed to have said “we could have had jets” in reference to the ignoring of jet engine possibilities prior to the start of the 1939–45 world war. His company’s aircraft, particularly the Mosquito, played a formidable role in that war. In 1944 he bought out his friend and engine designer Frank Halfords engine design consultancy company, forming the De Havilland Engine Company with Halford as head. Halford had previously designed a number of engines for de Havilland, including the De Havilland Gipsy and De Havilland Gipsy Major. Halford’s first gas turbine design entered production as the De Havilland Goblin powering de Havilland’s first jet, Vampire.

After the Second World War de Havilland continued with advanced designs in both the military and civil fields, but several public disasters doomed the company as an independent entity. The experimental tailless jet-powered de Havilland DH 108 Swallow crashed in the Thames Estuary, killing Geoffrey de Havilland, Jr., son of the company’s founder.  The De Havilland Comet was put into service in 1952 as the eagerly-anticipated first commercial jet airliner, twice as fast as previous alternatives and a source of British national pride. The Comet suffered three high-profile crashes in two years. Equally disastrous was the in-flight break-up of the DH 110 prototype during the 1952 Farnborough Airshow, which also killed members of the public. Because of the structural problems of the Comet, in 1954 all remaining examples were withdrawn from service, with de Havilland launching a major effort to build a new version that would be both larger and stronger. This, the Comet 4, enabled the de Havilland airliner to return to the skies in 1958. By then the United States had its Boeing 707 jet and the Douglas DC-8, both of which were faster and more economical to operate. Orders for the Comet dried up.

Geoffrey de Havilland retired from active involvement in his company in 1955, though remaining as president. He controlled the company until it was bought by the Hawker Siddeley Company in 1960. De Havilland continued flying up to the age of 70. In 1918, de Havilland was made an OBE, and was honoured with a CBE in 1934. He received the Air Force Cross in 1919, in recognition of his service in the First World War, and was knighted in 1944.

Paul Whitey, The deHavilland Comet Disaster – A Story of Fatigue, [6]