You are here: Home › geology › Emil Wiechert – Mapping the Inner Structure of the Earth 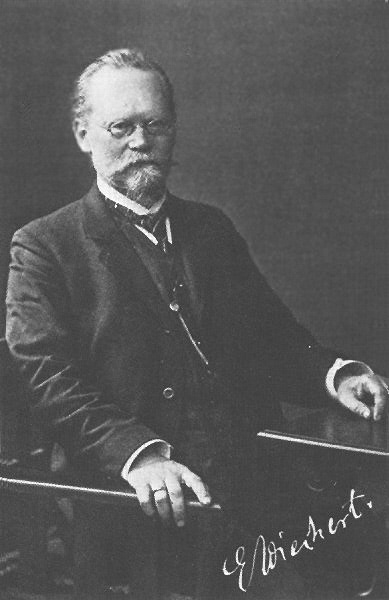 On December 26, 1861, German geophysicist Emil Johann Wiechert was born. Wiechert made many contributions to both fields, including presenting the first verifiable model of a layered structure of the Earth and being among the first to discover the electron. He invented the “inverted pendulum” seismograph, (an improvement still incorporated in today’s instruments), with which he was able to detect some of the Earth‘s inner structure. He suggested the Earth has an inner, dense core of nickel-iron metal which had settled to the center like iron settles from slag on the hearth of an iron mill.

“Far news brings you the wobbly rock: interpret the signs!”
– Emil Wiechert, 1902: Inscription above the earthquake house of the Göttingen earthquake observatory

Emil Wiechert was the only child of the merchant Johann Wiechert and his wife Emilie. He grew up in Königsberg, Prussia, today Kaliningrad, Russia, after the early death of his father. He attended the Löbenichtsche Realgymnasium and studied physics at the Albertus University in Königsberg after graduating from high school in 1881. In 1889 he received his PhD with a thesis under physicist Paul Volkmann. Already in the following year he was awarded his habilitation in physics at the University of Königsberg. His research in Königsberg dealt with the structure of matter, experiments with cathode rays and theoretical work on electricity. Little is known that he succeeded in one of the first determinations of the ratio of charge to mass of the electron. However, Wiechert failed to explain that these particles were a new type of elementary particle – the electron.

At about the same time as British physicist Joseph John Thomson (who is usually referred to as the discoverer),[4] he discovered the particle that is now called the “electron”. In April 1896, in a lecture to the Königsberg Physical-Economic Society, he pointed out the existence of a particle whose mass must be much smaller than that of the hydrogen atom. On January 7, 1897, he reported in a lecture to the same society that he had detected the particle and experimentally determined its mass to be about 2000 to 4000 times smaller than that of the hydrogen atom. In September 1897, he announced a more precise value: The mass of the particle is about 1/(1500 ± 500) of the mass of the hydrogen atom (today’s value 1/1838). Wiechert introduced independently of Alfred-Marie Liénard (1898) in an essay of 1900 the Liénard-Wiechert potentials of a moving load named after both of them.

After Göttingen physicists became aware of Emil Wiechert, he began working at the University of Göttingen in 1897, where in 1898 he was appointed to the world’s first chair of geophysics. After completion of the newly erected Institute for Geophysics on the Hainberg above Göttingen, Wiechert began in 1901 to set up the Wiechert Earthquake Observatory, which is still in operation today. The construction of Wiechert’s air-damped seismograph with high magnification, which for decades was to remain the model for most of the instruments used in earthquake observatories around the world, made it possible for the first time to continuously record earthquake activity worldwide. The ground motion diagrams recorded by these seismographs were used to investigate the propagation of earthquake waves and the structure of the earth’s interior. In addition, geomagnetic and air-electrical phenomena were investigated. In 1902, a geophysical observatory on Samoa was founded at Wiechert’s instigation, which was operated from Göttingen until after the First World War. It was based on the realization that answering the great questions of geophysics requires a worldwide observation network.

The Earth’s Interior and other Achievements

Many of Emil Wiechert’s Göttingen students later became important geophysicists and have decisively advanced areas of science, for example Beno Gutenberg and Ludger Mintrop as well as Hans Haalck. Wiechert himself received numerous honours, was in constant exchange with the leading physicists of his time and took an active part in the rapid developments in many fields of physics, including the development of the theory of relativity. This was expressed, among other things, in his contributions on the topic of ether in physics, about which Wilfried Schroeder brought a compilation, who also published the correspondence Sommerfeld-Wiechert and Lorentz-Wiechert. However, his most important field of work remained seismology, which he continued to advance in practical and theoretical fields. Consequently, in 1922 he initiated the foundation of the German Seismological Society, of which he was elected its first chairman in Leipzig. In 1924 the Deutsche Geophysikalische Gesellschaft (DGG) emerged, which named its highest award for outstanding work in the field of geophysics after Emil Wiechert.

Emil Wiechert rejected several calls to renowned chairs. In 1908 he had married Helene Ziebarth, the daughter of a well-known Göttingen lawyer; the marriage remained childless. With her and his mother he lived in seclusion and concentrated very much on his scientific work, which he continued undiminished until just before his death in 1928 at the age of 66.

Emil Wiechert is also internationally recognized as the founding father of the field of geophysics. Even today he is regarded as one of the most important seismologists in Germany, if not worldwide. The seismic observatory he founded in Göttingen is still in operation today as a scientific monument with historical instruments. It is the only facility that enables the direct comparison of major earthquakes of the past, such as San Francisco in 1906, with today’s earthquakes.