You are here: Home › biology › Earnest A. Hooton and Physical Anthropology 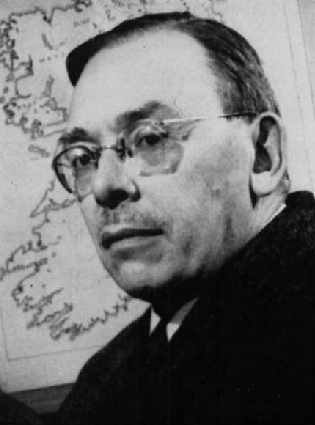 Earnest Albert Hooton was born in Clemansville, Wisconsin, USA. He was educated at Lawrence University in Appleton, Wisconsin, where heearned his BA in 1907. He won a Rhodes Scholarship to Oxford University, which he deferred in order to continue his studies in the United States and pursued graduate studies in Classics at the University of Wisconsin–Madison, where he received an MA in 1908  his Ph.D. in 1911 on “The Pre-Hellenistic Stage of the Evolution of the Literary Art at Rome“. However, Hoton found the classical scholarship at Oxford uninteresting and thus, quickly became interested in anthropology, which he studied with R.R. Marett, receiving a diploma in 1912. At the conclusion of his time in England, he was hired by Harvard University, where he taught until his death in 1954. He further became Curator of Somatology at the Peabody Museum of Archaeology and Ethnology.

Throughout his career, Hooton became known for his research projects in physical anthropology at a time when the field consisted most of anatomy and focused on physiological variation between individuals. He started using comparative anatomy in order to divide humanity up into races. He described the morphological characteristics of different “primary races” and the various “subtypes”. Through his work, Earnest Hooton played a significant role in establishing racial stereotypes about black athleticism and black criminality of his day in terms of an anthropological framework. For instance, he became part of a research committee focusing on the anatomy of blacks. In 1927, the committee supported a comparison of African babies with young apes and published findings in order to prove that “the negro race is phylogenetically a closer approach to primitive man than the white race.” However, E.B. Reuter, a sociologist and contemporary of Hooton, criticized Hooton for using circular logic when he ascribed the physical traits of criminals to cause criminality

Further, Hooton supported the idea that no scientific basis existed correlating mentality with racial variation. He came to the conclusion that “no type produces a majority of individuals from either end of the scale. While there may be specific racial abilities and disabilities, these have not yet been demonstrated. There are no racial monopolies either of human virtues or of vices.“

During the 1930s, Earnest Hooton wrote the article Is the Negro Inferior, which was published by the Crisis magazine. In it, he discussed racial differences. He defined race as a matter of inheritance and claims that differences between races have made the basis of racial differences. He stated that “We are likely to infer that the people who have been producing different manners than us belong to inferior races than us.”

This is, according to Hooton, because humans assume the native measure of culture as a standard and declare outcasts as inferior. He further claimed that culture became a measurement of individual intelligence and according to Hooton, this is where racial segregation starts. When intelligence tests around that period indicated that white people were smarter than blacks, Hooton explained that an experiment bias could be the reason for that.

Hooton was a representative of racial theory and a follower of eugenics. His 1943 essay for the PM Daily during the Second World War with a propagandistic background and published as part of a collective article together with contributions by Franz Boas, Dorothy Thompson, and Albert Einstein, is depicted by right-wing, xenophobic conspiracy theorists in Germany as an actually implemented plan (“Hooton Plan“) against all source criticism. Hooton pleaded for the settlement of non-German populations in Germany to “destroy German nationalism and aggressive ideology”. Above all, however, he pleaded for the use of German soldiers in the war-destroyed areas for forced labor for reconstruction after the war. As an eugenicist, he wanted to eliminate the predatory tendencies of the Germans, which for him were biologically based and innate, by crossing them with representatives of other peoples.

In addition to his teaching activities, he contributed in particular through his well-known publications Up From The Ape (1931) and Apes, Men and Morons (1937) to making this branch of anthropology known to a wide readership. He was also a gifted cartoonist and wit, and, like his contemporaries Ogden Nash and James Thurber, he published occasional poems and drawings that were eventually collected and published.