You are here: Home › history › The Death of Blackbeard, Terror of the Carribean 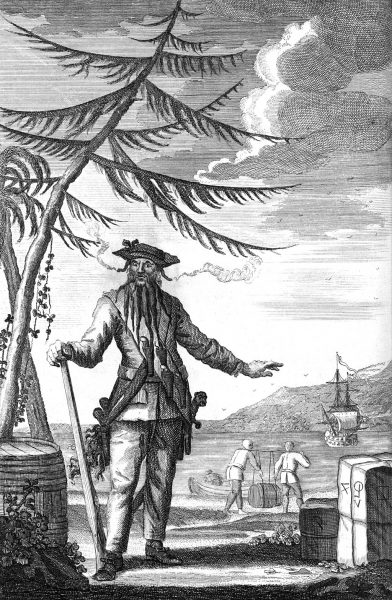 On November 22, 1718, English pirate Edward Teach or Edward Thatch, better known as Blackbeard, was killed. Blackbeard operated around the West Indies and the eastern coast of Britain’s North American colonies. Teach was a shrewd and calculating leader who spurned the use of force, relying instead on his fearsome image to elicit the response that he desired from those whom he robbed. Contrary to the modern-day picture of the traditional tyrannical pirate, he commanded his vessels with the consent of their crews and there is no known account of his ever having harmed or murdered those whom he held captive. He was romanticized after his death and became the inspiration for an archetypal pirate in works of fiction across many genres.

Little is known about Blackbeard’s early life. It is commonly believed that at the time of his death he was between 35 and 40 years old and thus born in about 1680. In contemporary records his name is most often given as Blackbeard, Edward Thatch or Edward Teach. Pirates habitually used fictitious surnames while engaged in piracy, so as not to tarnish the family name, and this makes it unlikely that Teach’s real name will ever be known. The 17th-century rise of Britain’s American colonies and the rapid 18th-century expansion of the Atlantic slave trade had made Bristol an important international sea port, and Teach was most likely raised in what was then the second-largest city in England. He could almost certainly read and write. He may have arrived in the Caribbean in the last years of the 17th century, on a merchant vessel. The 18th-century author Charles Johnson claimed that Teach was for some time a sailor operating from Jamaica on privateer ships during the War of the Spanish Succession.

The privateer-turned-pirate Henry Jennings and his followers decided, early in the 18th century, to use the uninhabited island of New Providence as a base for their operations. Teach was one of those who came to enjoy the island’s benefits. Probably shortly after the signing of the Treaty of Utrecht, he moved there from Jamaica, and with most privateers once involved in the war, became involved in piracy. Possibly about 1716, he joined the crew of Captain Benjamin Hornigold, a renowned pirate who operated from New Providence’s safe waters. In 1716 Hornigold placed Teach in charge of a sloop he had taken as a prize. In early 1717, Hornigold and Teach, each captaining a sloop, set out for the mainland. It was during this cruise with Hornigold that the earliest known report of Teach was made, in which he is recorded as a pirate in his own right, in command of a large crew. As a former British privateer, Hornigold attacked only his old enemies, but for his crew, the sight of British vessels filled with valuable cargo passing by unharmed became too much, and at some point toward the end of 1717 he was demoted.

The most feared Pirate of the American East Coast

In the first three weeks of October 1717 Teach attacked Chesapeake Bay, Philadelphia and New York, never staying in one place for more than two days. During this time, he captured at least 15 ships and suddenly became the most feared pirate of the American East Coast. When the military authorities started looking for him, he was already on his way to the Eastern Caribbean with his ship Revenge and two angry prize ships. There, on 17 November 1717, he launched the 250-ton French slave transport ship La Concorde under captain Pierre Dosset, which was not able to defend itself, as 16 crew members had previously died of scurvy and bloody effluent and the rest of the crew was very weakened. In addition, many of the 40 cannon pitches were vacant to make more space for the 516 chained slaves. Of the 455 slaves still alive at the time of the application, Blackbeard retained 61, leaving the remaining 394 to captain Pierre Dosset, who then sold them on Martinique. Blackbeard took over the La Concorde, rebuilt it for his purposes and named it Queen Anne’s Revenge. Slave transport ships were well suited as pirate ships because they were large, fast and well armed.

On 5 December 1717 Teach stopped the merchant sloop Margaret off the coast of Crab Island, near Anguilla. Her captain, Henry Bostock, described Teach as a “tall spare man with a very black beard which he wore very long“. It is the first recorded account of Teach’s appearance and is the source of his cognomen, Blackbeard.[29] Later descriptions mention that his thick black beard was braided into pigtails, sometimes tied in with small coloured ribbons. Blackbeard had its headquarters in the Bahamas and the territory of the British colony of Carolina. The governor of North Carolina, Charles Eden, accepted booty from Blackbeard; in return, he granted him unofficial protection and an official pardon. After a few weeks, however, Blackbeard returned to piracy. It is controversial whether he had squandered his fortune and wanted to improve his financial situation again or whether, after many years at sea, life on land simply bored him. The attacks increased in the following years.

Blackbeard, who appeared to be hung with several blades, knives and pistols, became famous for the burning fuses he used to tie in his long beard before a battle. This “diabolical” appearance, which he cultivated himself, has made him the epitome of an intrepid pirate. The fact that his appearance also established his reputation as a particularly cruel pirate has led many a captain of a merchant ship to surrender without resistance. Although Blackbeard’s outward appearance and appearance ensured that he was feared, he was not only concerned with violence. Especially smaller ships he liked to capture without firing a cannon. This habit eventually became his downfall. 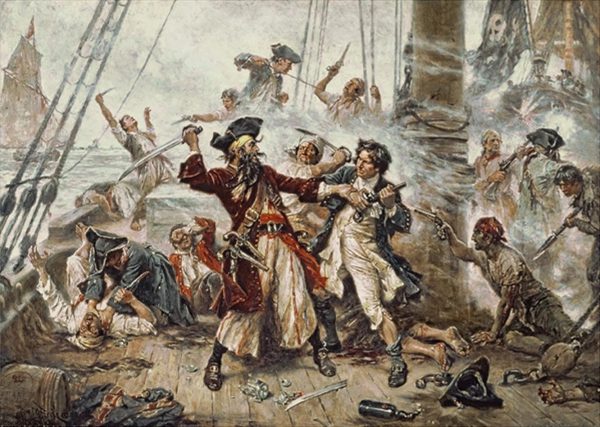 On the occasion of the siege of the port of Charleston, South Carolina, in May 1718, when Blackbeard, heavily addicted to drugs and alcohol, demanded only a box of laudanum worth only 600 dollars as well as medicine for his crew, the governor of Virginia, Alexander Spotswood, decided to send two warships under the command of the lieutenant of the Royal Navy Robert Maynard to arrest and kill Teach. The Royal Navy awaited him with two small sloops at the height of Ocracoke Inlet. These two ships, the Ranger and Jane, were merchant ships hired specifically for this operation with an additional 56 crew members from HMS Pearl and HMS Lyme on deck, who were also involved in the operation. Since the Rangers and Jane obviously had no cannons on board, Blackbeard decided to board the ships. When Blackbeard’s men tried to board the enemy ships, which supposedly had a small crew, Maynard stomped on the planks with his foot. This was the sign for the men who had “loaded” the two ships instead of the cannons to storm on deck. Blackbeard was completely surprised by the attack, and his men were outnumbered. Maynard’s primary target was to kill Blackbeard. He eventually died of blood loss due to gunfire and blows, his body was later found to have five gunshot wounds and no fewer than 20 cuts.

Blackbeard was beheaded and his head hung on the bowsprit of Maynard’s sloop until the pirate hunters returned to Virginia. Legend has it that Blackbeard’s body swam two more rounds around the ship before descending to the bottom of the sea. Others said it was even seven laps.