You are here: Home › anthropology › Colin Turnbull and the Forest People 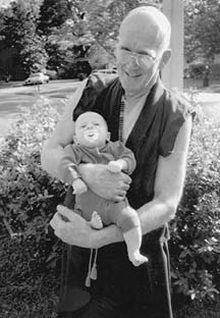 On November 23, 1924, British-American anthropologist Colin Turnbull was born. Turnbull came to public attention with the popular books The Forest People on the Mbuti Pygmies of Zaire and The Mountain People on the Ik people of Uganda, and one of the first anthropologists to work in the field of ethnomusicology.

Colin Turnbull was born in the London borough of Harrow His parents were Helen Dorothy Wellesley Chapman (1894-1977) and John Rutherford Turnbull (1884-1975). He attended Westminster School and studied at Magdalen College in Oxford. During the Second World War he worked in the Royal Navy from 1942 to 1946. He then moved to India to live in the ashram of the guru Anandamayi Ma. He was awarded a grant in the Department of Indian Religion and Philosophy, Banaras Hindu University, India, from which he graduated with a master’s degree in Indian Religion and Philosophy. After graduating from university in 1951, he travelled with Newton Beal to the Ituri rainforest of what was then the Belgian Congo (now the Democratic Republic of Congo) to the camp of Patrick Putnam and Anne Eisner-Putnam to study the Mbuti Pygmies. He stayed there until 1952.

During his time in Africa, Turnbull also worked for Hollywood producer Sam Spiegel. He was hired to assist in the construction and transportation of a boat needed for his film The African Queen, which starred Humphrey Bogart and Katharine Hepburn. After his first trip to Africa, Turnbull came to Yellowknife in northwest Canada in 1953 to work as a gold digger for a short time.

To continue his studies, he returned to Oxford University in 1954 where he studied social anthropology (1956) and literature (1957). During this time he became engaged to the Indian Kumari Mayor. During the late 1950s he returned for further studies to the Belgian Congo and Uganda and he was awarded his anthropology doctorate from Oxford in 1964. One year later, he became a naturalized citizen of the United States after moving to New York City in order to become curator in charge of African Ethnology at the American Museum of Natural History. Later on, Turnbull became staff member in the Department of Sociology and Anthropology, Virginia Commonwealth University, Richmond.

Colin Turnbull first became famous for his 1961 book The Forest People. In it, Turnbull discusses his three years spent with the Mbuti pygmies community of the then-Belgian Congo in the late 1950s. He managed to contrast his forest-living subjects’ lifestyle with that of nearby town-dwelling Africans and evaluate the interactions of the two groups. Turnbull wrote about his experiences with the tribe from a first person perspective as he trove through many years with the African Pygmies. The Mbuti tribe respected him, and attempted to show him their cultural prospects as a society. From 1965 to 1967, Turnbull and Towles conducted fieldwork among the Ik of Northern Uganda in Africa. In the Congo in 1970, they conducted fieldwork on the Nkumbi circumcision initiation ritual for boys and the Asa myth of origin among the Mbo of the Ituri forest.

One of Colin Turnbull’s most controversial works was The Mountain People. In it, the scientist describes what happens to a society that is forced to abandon its culture, and the fierce individualism and hardship that results. The Ik were a hunter/gatherer tribe who had been forced to stop moving around ancestral lands, through the seasons, because it now involved the three national borders of Uganda, Kenya and Sudan.They were forced to become stationary in Uganda and without a knowledge base and culture for survival under such conditions, they failed to thrive, even to the point of starvation and death. The book permanentally became part of the reading list of anthropology university courses.

Late in life Turnbull took up the political cause of death row inmates. In 1989, Turnbull moved to Bloomington, Indiana, to participate in the building of Tibetan Cultural Center with his friend Thupten Jigme Norbu, elder brother of the 14th Dalai Lama. Later Turnbull moved to Dharamsala, India where he took the monks’ vow of Tibetan Buddhism, given to him by the Dalai Lama. Turnbull’s partner, Joseph P Towles died of AIDS in 1988, and Turnbull had Towles book “Nkumbi Initiation and Asa: Myth of Origin of the Blood Brotherhood Among the Mbo of the Ituri Forest” published posthumously. Turnbull himself dies of AIDS in 1994