You are here: Home › chemistry › Carl Djerassi and the Oral Contraceptive Pill

On 18 August, 1960, Enovid was launched as the first contraceptive pill in the United States. It was developed by Austrian-born Bulgarian-American chemist, novelist, and playwright Carl Djerassi. Furthermore, he is noted for establishing physical methods for determining organic molecular structure and his contributions to synthetic organic chemistry, his effectiveness in translating scientific knowledge into technological practice, and his efforts to promote international scientific cooperation.

Youth in Austria and Emigration to the USA

Carl Djerassi was born in Vienna, Austria, into a Jewish family and spent the first years of his infancy in Sofia, Bulgaria, the home of his father, Samuel Djerassi, a dermatologist and specialist in sexually transmitted diseases. His mother was Alice Friedmann, a Viennese dentist and physician. Until the age of 14, Djerassi attended the same realgymnasium that Sigmund Freud had attended many years earlier.

Austria refused him citizenship and after the Anschluss to the German Third Reich, his father briefly remarried his mother in 1938 to allow Carl and his mother to escape the Nazi regime and flee to Sofia, Bulgaria, where he lived with his father and attended the American College of Sofia. In 1939, together with his mother Djerassi arrived in the United States, where his mother worked in a group practice in upstate New York. In 1949, his father also emigrated to the United States.

In 1949 Djerassi became associate director of research at Syntex in Mexico City and remained there through 1951. He worked on a new synthesis of cortisone based on diosgenin, a steroid sapogenin derived from a Mexican wild yam. His team later synthesized norethisterone (norethindrone), the first highly active progestin analogue that was effective when taken by mouth. This became part of one of the first successful combined oral contraceptive pills, known colloquially as the birth-control pill, or simply, the Pill.

From 1952–1959 Djerassi was professor of chemistry at Wayne State University in Detroit. Djerassi participated in the invention in 1951, together with Mexican Luis E. Miramontes and Hungarian-Mexican George Rosenkranz, of the progestin norethisterone — which, unlike progesterone, remained effective when taken orally and was far stronger than the naturally occurring hormone. His preparation was first administered as an oral contraceptive to animals by Gregory Goodwin Pincus and Min Chueh Chang and to women by John Rock.

In 1960 Djerassi became a professor of chemistry at Stanford University, a position he held until 2002. From 1968 until 1972 he also served as president of Syntex Research at Palo Alto. 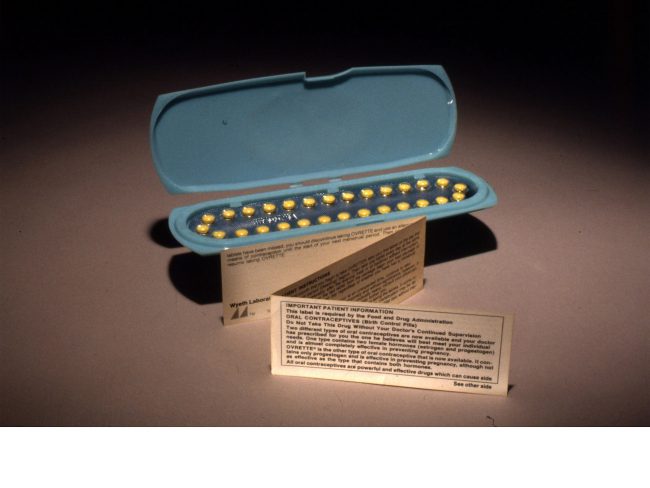 Despite opposition from organized medicine and industry, FDA mandated a patient package insert for oral contraceptives in June 1970 based on a concern that patients were not uniformly provided information for their safe and effective use.

The Syntex connection brought wealth to Djerassi. Besides building up a large cattle ranch, he also assembled a large art collection. His collection of works by Paul Klee was considered to be one of the most significant to be privately held. Throughout the 1960s and 1970s, Djerassi pioneered novel physical research techniques for mass spectrometry and optical rotatory dispersion and applied them to the areas of organic chemistry and the life sciences. Focusing on the steroid hormones and alkaloids, he elucidated the structure of steroids, an area in which he published over 1,200 papers. His scientific interests were wide-ranging, and his technological achievements include work in instrumentation, pharmaceuticals, insect control, the application of artificial intelligence in biomedical research, and the biology and chemistry of marine organisms.

From Birth Control to Pest Control

In 1968, he started a new company, Zoecon, which focused on environmentally soft methods of pest control, using modified insect growth hormones to stop insects from metamorphosing from the larval stage to the pupal and adult stages. Zoecon was later sold it to Sandoz, now Novartis. In 1965 at Stanford University, nobel laureate Joshua Lederberg, computer scientist Edward Feigenbaum, and Djerassi devised the computer program DENDRAL (dendritic algorithm) for the elucidation of the molecular structure of unknown organic compounds taken from known groups of such compounds, such as the alkaloids and the steroids. This was a prototype for expert systems and one of the first uses of artificial intelligence in biomedical research.

Djerassi wrote five novels, four of which he describes as “science-in-fiction”, fiction which portrays the lives of real scientists, with all their accomplishments, conflicts, and aspirations. The genre is also referred to as Lab lit. In his first two novels, Cantor’s Dilemma and Bourbaki Gambit, he shows how scientists work and think. In Cantor’s Dilemma, there is the suspicion of scientific fraud; in Bourbaki Gambit the question of personal achievement stands in the center. After his success with prose literature in the Science-in-Fiction genre, Carl Djerassi started to write plays. Djerassi’s first play, An Immaculate Misconception (1998), dealing with the in vitro fertilization procedure ICSI, was followed by two plays about priority struggles in the history of science, Oxygen (co-authored with Roald Hoffmann, 1999) and Calculus (2002), and a drama at the intersection of chemistry and art history, Phallacy (2004). Djerassi wrote numerous poems that were published in journals or anthologies.

At yovisto academic video search, you may enjoy a video lecture by Robert Wyman on the also controversial topic Global Demography of Abortion as part of the series ‘Global Problems of Population Growth’ at Yale University.