You are here: Home › war/crime › The Incredible Story of the Captain of Köpenick 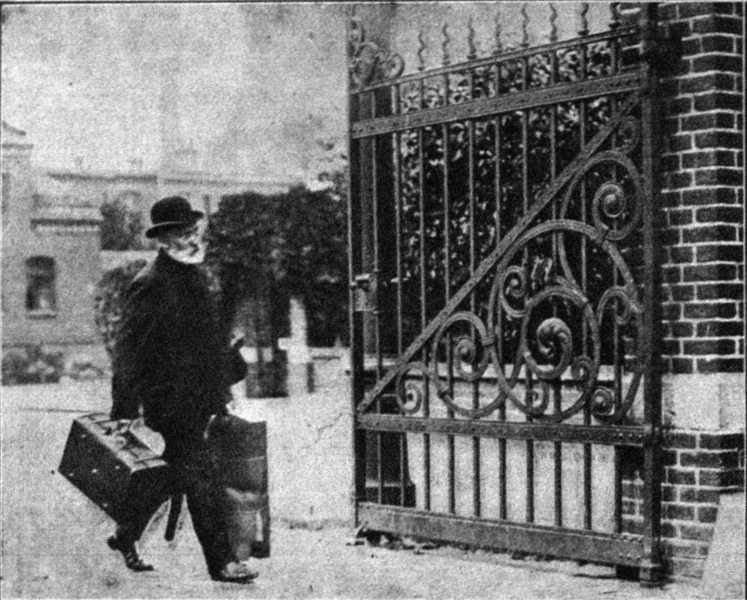 On October 16, 1906, German shoemaker Wilhelm Voigt, just released from prison for forgery, purchased parts of used captain’s uniforms. In this masquerade of a Prussian military officer he arrested the mayor and the treasurer of Köpenick for suspicion of crooked bookkeeping and confiscated the municipal funds. In Germany Voigt is not seen as a criminal, but rather as a folk hero and a victim of official prejudice, who was caught in the kafkaesque situation of not getting work without a residence permit, while not being able to have a residence permit without work.

Wilhelm Voigt was born in Tilsit on 13 February 1849 as the son of a shoemaker. Already at the age of 14, Voigt was arrested for stealing, and after this he became a shoemaker who traveled around Germany. However, in the following years, he was arrested several times for various crimes. Between 1864 and 1891 he was convicted four times for theft and twice for forgery and spent many years in prison. His last attempt to rob the Wongrowitz court in what was then the Prussian province of Poznan with a crowbar was in 1890 and he was sentenced to 15 years in prison. After his release at the beginning of 1906 Voigt moved to Wismar, where the pastor of the institution had provided him with a position with the court shoemaker Hilbrecht, where he led himself well. Due to his previous convictions, however, he received after a few months a police residence ban for the Grand Duchy of Mecklenburg-Schwerin.

Thereupon he moved to Rixdorf near Berlin, where he lived with his older sister Bertha and her husband, the bookbinder Menz, and found work in a shoe factory. On 24 August 1906 Wilhelm Voigt was also banned from living in the greater Berlin area, although he did not adhere to it. Instead he stayed as a “Schlafbursche” in an unannounced accommodation in Berlin-Friedrichshain near the Silesian railway station. He initially retained his job, but due to his illegal status had little prospect of permanent employment. At the end of September, he told his employer and his partner Riemer, a 50-year-old factory worker who lived in the sister’s house next door, about an alleged inheritance in Odessa, which he had to travel to claim for some time. On 6 October he appeared for the last time in the factory.

Voigt started making plans for a coup. He purchased used parts of a captain uniform of the first regiment and gave orders to several soldiers he found on the streets. Those did not recognize his costume and together they took off for Köpenick and made a short stop for a couple of beers. On their way, he explained that he is going to have the mayor and “maybe some other men” arrested. Arriving at the city’s townhall, the false Captain of Köpenick indeed arrested mayor Langerhans and secretary Rosenkrannz. He declared that he needed to confiscate all cash stored in the building. Langerhans and Rosenkrannz were transported to the New Guard House in Berlin and Voigt had his soldiers guard the town hall while he left with the cash and had another beer just around the corner. Finally, the false captain Langerhans and von Wiltburg had the New Guard in rented cabs brought to Berlin under military guard, after he had taken their word of honor from them not to attempt an escape. According to press reports, he had also managed to block the Köpenick post office for one hour for telephone calls to Berlin. It was only after the prisoners had been transported away that some city councillors were able to inform the district office by telegram.

After the end of his action the captain of Köpenick gave his troops the order to keep the town hall occupied for half an hour. He himself went back to the station under the eyes of a curious crowd. According to newspaper reports, he was served a glass of light in the station restaurant, which he emptied in one go, and disappeared on the next train towards Berlin. Shortly afterwards he bought civilian clothing from a men’s outfitter and left most of his uniform behind on the Tempelhofer Feld, where it was found by passers-by. After a few hours, the fraud was official, but no one knew who the false Captain was. About two weeks later, a friend Voigt’s revealed his identity and he was arrested shortly after. He was sentenced to four years of prison but granted a reprieve by Wilhelm II in August of 1908. 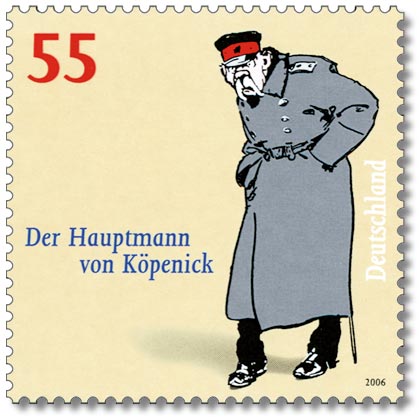 The Captain of Koepenick on a German Stamp, 2006

All over Germany, people laughed about this act of desperation and even the court saw that not having any perspective in life after prison caused this kind of behavior. Every newspaper in the country started writing about the false captain, poems, stories and even theater plays were created and kept the political and cultural scene Germany’s busy for quite a while. But next to laughter, this case also caused lots of criticism on the German military and its political enormous role. Voigt however, became famous and got settled in Luxemburg were he lived for the rest of his life. Starting in 1906, more and more theater plays were released in Europe and increased Voigt’s fame. Later he travelled all over Germany and appeared in pubs and fairs. In halls or circus tents he mimed the Captain of Köpenick and sold autograph cards with pictures showing him in uniform or plain clothes. Individual members of the “troop” he had commanded at the time also took part in the performances or had themselves photographed with him. His autobiography How I Became Captain of Köpenick appeared in 1909 in a Leipzig publishing house. In later years, even movies were produced that reconstructed the event. One of the most famous is probably the 1956 released movie with Heinz Rühmann.