On April 1, 1764, English civil engineer, surveyor and industrialist Benjamin Outram was born. Outram was a pioneer in the building of canals and tramways. His commissions included becoming engineer for the Nottingham Canal in 1792, and the Derby Canal in 1793. For the latter, he erected the world‘s first cast iron navigable aqueduct (water bridge), the 13m long, single span, Holmes Aqueduct that carried the Derby Canal.

Born at Alfreton in Derbyshire, he began his career assisting his father Joseph Outram, a land agent and enclosure commissioner arbitrating in the many disputes which arose from the enclosures acts, an advisor on land management, a surveyor for new mines and served as a turnpike trustee. In 1792 his neighbour George Morewood died and left his estates to Ellen Morewood. She was mining under Outram land. Over the next nine years the Outrams engaged in a legal battle with her. Land had been sold to them by the Morewoods but Ellen believed that she still had the rights to the coal and ironstone beneath them. James and Benjamin Outram disagreed and they appealed and in 1803 the lord chief justice, Lord Ellenborough agreed with them.

When English civil engineer William Jessop was approached to design and build the Cromford Canal, Benjamin Outram became his assistant. Cromford Canal has a length of 23.3 kilometres and ranges from Cromford to the Erewash Canal in Derbyshire, England with a branch to Pinxton. Its alignment included four tunnels and 14 locks. Jessop had based his initial predictions for the expected returns on the carriage of limestone from Cromford and Crich and coal from Pinxton. However, the canal itself encouraged new enterprises. The canal mostly carried coal, lead and iron ore, some extracted from inside the Butterley Tunnel. Copper was brought from as far away as Ecton Hill in Staffordshire and the canal opening the way for lead from Ecton, as well as Wirksworth to be taken to the Lead Market at Hull and chert from Bakewell to the Potteries.

The ironworks company ‘Benjamin Outram & Company‘ was founded around 1790 and one year later, William Jessop and John Wright, a Nottingham banker, also became partners. The business further expanded to include a limestone quarry, limekilns, collieries and ironstone pits. Outram further became a leading advocate in the construction of tramways using L-section rails. His first tramway was a line slightly over 1.6 km in length, built to carry limestone from quarries at Crich to Bullbridge Wharf on the Cromford Canal, for use by his works.

In 1792, Benjamin Outram became engineer for the Nottingham Canal and in 1793 the Derby Canal. The Derby Canal ran 14 miles (23 km) from the Trent and Mersey Canal at Swarkestone to Derby and Little Eaton, and to the Erewash Canal at Sandiacre, in Derbyshire, England.  It featured a level crossing of the River Derwent in the centre of Derby. An early tramroad, known as the Little Eaton Gangway, linked Little Eaton to coal mines at Denby. The canal’s main cargo was coal, and it was relatively successful until the arrival of the railways in 1840. 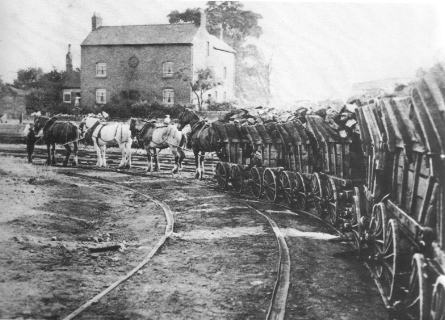 In 1796, the 13 m long single-span Holmes Aqueduct on the Derby Canal was opened. It was one of the first cast-iron aqueducts and was cast by Benjamin Outram & Company. Another significant extension to the Derby Canal was the Little Eaton Gangway, a feeder for the Derby Canal. Tramways like these became an important part of his later canals. Outram’s aqueduct predated Thomas Telford‘s longer aqueduct on the Shrewsbury Canal at Longdon-on-Tern by about one month.[4] The oldest currently navigable cast-iron aqueduct is Outram’s Stakes Aqueduct on the Huddersfield Narrow Canal at Stalybridge, built around 1801 to replace an original, stone-built, four arch structure, which had been swept away in the floods of August 1799.

At the Huddersfield Narrow Canal, Benjamin Outram became a consulting engineer. In 1794 he was the engineer for the Peak Forest Canal, which included the Marple Aqueduct. In 1798, he was retained to complete the final section of the Ashton Canal which included the Store Street Aqueduct, among the first to solve the problem of skew arches. Outram further built railways for the Ashby-de-la-Zouch Canal such as the Ticknall Tramway and was asked to advise on railways for the Monmouthshire & Brecon Canal.

His sudden death on May 22, 1805, without a will led to considerable confusion and litigation in the company’s business affairs, and it took until 1815 to resolve these with his wife and family. In 1807 Benjamin Outram and Company was renamed the Butterley Company.