You are here: Home › aviation › Aviatrix Amy Johnson and the Flight to Australia 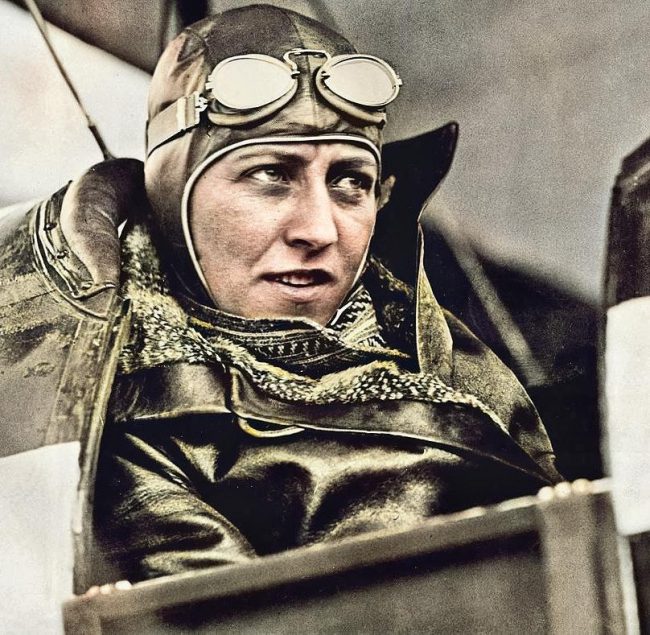 On May 24, 1930, pioneering English aviatrix Ami Johnson safely landed in Darwin, Northern Territory, Australia after a 18.000km flight, becoming the first woman pilot to fly solo from England to Australia.

Amy Johnson was an enthusiastic sportswoman who played hockey and cricket. At the age of 14 she lost several front teeth to a cricket ball. Since she came from a not incapable family – her father was a successful fishmonger – the family could afford expensive dentists, and Amy received good artificial teeth. Nevertheless, she felt disfigured and her self-confidence suffered. This is often seen as the cause of the depression and hypersensitivity she later suffered from.  Amy Johnson studied at the University of Sheffield. After her Bachelor of Arts she went to London, where the shy young woman took a job as a secretary, later in an advertising agency. In the winter of 1928/29 she began her flying lessons at the London Aeroplane Club. One hour cost 5 pounds, which was her weekly wage.

On 9 June 1929 she made her first solo flight, and in August she obtained her pilot’s licence. Unlike other female pilots of her time, Amy Johnson was also interested in mechanics and maintained and repaired her aircraft herself. Since her work as a secretary did not satisfy her, she immediately agreed when the head of the airport mechanics wanted to hire her as an apprentice mechanic. She was the first woman in Great Britain to take her exam as an aircraft mechanic in December 1929. Her dream was to become a professional pilot – but at that time nobody trusted a woman’s flying skills.

Thanks to the financial support of her father, she was able to quit her job as a secretary and take all the time she needed to pass the exams for the B certificate (private pilot). To gain recognition, she planned something spectacular: She wanted to fly solo to Australia and beat Bert Hinkler‘s record of 1928 days at 15½ With her father’s money she bought a single engine Gypsy Moth from de Havilland, painted it green and christened the machine, now on display in London’s Science Museum, after the name of her father’s company Jason. The competition for sponsors for daring flying ventures was extremely fierce in the late 1920s and early 1930s. After many efforts and setbacks, the British oil entrepreneur Lord Wakefield finally showed himself willing to bear half of the costs and provide fuel during the stage stops. Amy Johnson meticulously prepared her flight. On 5 May 1930 she took off from Croydon Airport in her Gypsy Moth. As she was still completely unknown at that time, only her father and a few fellow pilots were present at the take-off – the press did not want to know anything about the inexperienced pilot, whose longest distance to date had been 237 km from London to Kingston upon Hull.

Looking back, Johnson wrote that she had been very naive and far underestimated the dangers of adventure. From London to Istanbul there were no problems. In her logbook, Amy Johnson only complained about the petrol fumes flowing from the auxiliary tanks installed instead of the passenger seat. On the third day after the start she met the first serious challenge: The Taurus Mountains were 3600 m high, while her heavily loaded plane could only climb safely up to 3300 m. The Taurus Mountains were the highest mountains in the world. After careful searching in the fog, she finally found the railway line of the Baghdad Railway, along which she flew, before finally landing relieved in Aleppo, Syria.

From Bagdad to Allahabad – The Flying Secretary

The next stage was to lead her to Baghdad, but shortly before the finish she was caught in a sandstorm. Johnson saw nothing and her Gypsy Moth was not equipped for blind flying. The wind drove her into the desert. Finally, for safety reasons, she landed in the middle of the desert, hoping not to get caught in deep sand. After three hours of waiting, the storm subsided and she was able to fly on. In Baghdad she had no more strength to carry out the maintenance work herself and was overjoyed when her Imperial Airways mechanic took over. When she arrived in Karachi the following day, she had already undercut Australian aviation pioneer Bert Hinkler by two days. Suddenly the “Flying Secretary” became known, and the press was rife about reports about her flight. She was very surprised when she arrived in Allahabad and was received by a group of journalists.

From Rangoon to Darwin

From Rangoon the route went to Singapore. Over the sea between Singapore and Java, she was again caught in a storm from which she could not get out for six hours. When she arrived in Java, she had to make an emergency landing again due to the damaged wings in the storm. In the absence of any other material, she repaired the torn fabric with adhesive strips. After Java, the Timor Sea, feared by all pilots, lay ahead of her: 800 km above the water. In order not to fall asleep, she sang until she reached Melville Island off the Australian continent. Amy Johnson landed in Darwin on 24 May without any further problems. It had taken her four days longer to fly than Bert Hinkler. Nevertheless, this flight made her a star among the female pilots. Two pop songs were even composed in her honour.  The shy Amy Johnson was handed from hand to hand to receive gifts and honours, to give lectures and write reports.  Soon the hustle and bustle became too much for her.  When she learned from her father that he had signed an exclusive contract in her name with the Daily Mail, she suffered a nervous breakdown.

Amy Johnson escaped into the air. In July 1931, Johnson and her co-pilot Jack Humphreys, became the first pilots to fly from London to Moscow in only one day. They completed the 2,830 km journey in approximately 21 hours and from there, they continued across Siberia and on to Tokyo, setting a record time for flying from Britain to Japan. The flight was completed in G-AAZV de Havilland DH.80 Puss Moth, named “Jason II“. Only one year later, the pilot set a solo record for the flight from London to Cape Town, South Africa in a Puss Moth, “G-ACAB”, named Desert Cloud. Her next flights were as a duo, she flew nonstop from Pendine Sands, South Wales, to the United States.However, their aircraft ran out of fuel and crash-landed in Bridgeport, Connecticut. In the accident, both pilots were injured, but received a ticker tape parade down Wall Street. 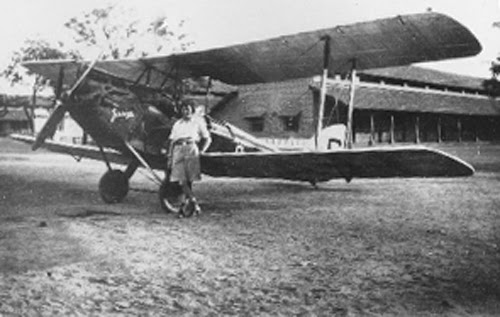 Back in England it was unusually quiet around Amy Johnson. A previously unknown Scottish pilot named James “Jim” Allan Mollison had contested “her” Australian route in only 9 days and thus outstripped her rank. She got to know Jim Mollison personally in June 1932 in South Africa, where she recovered from a solo flight from London to Cape Town. Jim flew the same route, beating the existing record. The two successful pilots were already taken with each other at the first meeting, and already at the next meeting in London a few weeks later Jim Amy made a proposal of marriage. The British press celebrated the wedding of two of their favourites in July 1932. Immediately after the wedding, Amy Johnson-Mollison beat her husband’s record on the London-Cape Town route. 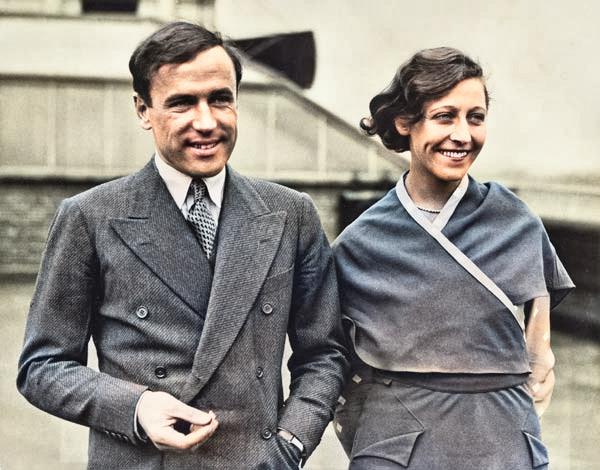 Johnson was promoted to a First Officer around 1940, when she joined the Air Transport Auxiliary, which was responsible for transporting Royal Airforce aircraft around the country. Only one year later, the brave pilot flew an Airspeed Oxford for the ATA from Blackpool to RAF Kidlington near Oxford. She went off course in adverse weather conditions and it is assumed that she ran out of fuel. Johnson bailed out as her aircraft crashed into the Thames Estuary. Her parachute was spotted as she went down into the water and it is known that she was still alive at that point. However, conditions were poor and the woman faced a very heavy see and a strong tide. Also, snow was falling and it was intensely cold. During an attempt by a near by boat crew to rescue her, she died and her body could never be recovered.

The circumstances under which the woman died are still quite a mystery. The exact reason for the flight is still a government secret and there is some evidence that besides Johnson and Fletcher, who attempted to rescue her, a third person was also seen in the water and also died. Who the third party was is still unknown. In 1999, it was officially reported, that Amy Johnson may have been shot down. Tom Mitchell, from Crowborough, Sussex claimed that “he reason Amy was shot down was because she gave the wrong colour of the day (a signal to identify aircraft known by all British forces) over radio“. Apparently, it became clear that it was Amy Johnson, who flew the plane only at the next day and Mitchell said that “the officers told us never to tell anyone what happened“.