You are here: Home › biology › August Weismann – the Founder of Neo-Darwinism 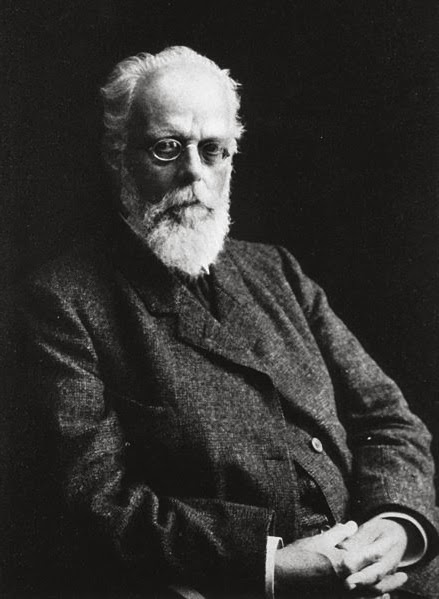 On January 17, 1834, German evolutionary biologist Friedrich Leopold August Weismann was born. He is considered the second most notable evolutionary theorist of the 19th century, after Charles Darwin, and one of the founders of Neo-Darwinism.

“When we are confronted with facts which we see no possibility of understanding save on a single hypothesis, even though it be an undemonstratable one, we are naturally led to accept the hypothesis, at least until a better one can be found.”
— August Weismann

August Weismann was born in Frankfurt am Main, Germany, as the son of the high school professor Johann (Jean) Konrad Weismann, who had studied ancient languages and theology, and his wife Elise, née Lübbren, daughter of the district administrator and mayor of Stade. Weismann started receiving piano lessons at the age of 14 and was introduced into collecting butterflies and caterpillars, which highly influenced the future scientist. Still, Weismann did not plan on studying natural sciences due to financial deficits and lacking career prospects. The chemical scientist Friedrich Wöhler then advised the young Weismann to study medicine in Göttingen. A foundation from his mother’s inheritance enabled Weismann to study in Göttingen as late as 1852. After graduating in 1856, he wrote his dissertation on the development of hippuric acid in the human body. After his graduation he began his medical career in Rostock, Germany. Only one year later, Weismann enrolled at the city’s university to study chemistry while publishing several scientific works on various fields. He successfully submitted two writings, one on hippuric acid in herbivores and one on the salt content of the Baltic Sea, one and won two prizes. The writing about the salt content brought him away from his wish to become a chemist, because he missed the apothecary precision. Weismann visited several hospitals to improve his studies and joined the German Army in 1859. In the following years, Weismann worked in several universities and hospitals around Europe.

From 1863, the year of his habilitation in zoology in Freiburg, Weismann was a private lecturer, from 1865 an unscheduled professor, from 1867 a full professor and finally from 1873 until his retirement in 1912 professor of zoology at the first chair of zoology in Freiburg and director of the Zoological Institute at the University of Freiburg; in 1883/84 he held the office of rector of the university. Starting in 1873, Weismann became involved with living creatures in freshwater lakes and conducted research on Lake Constance, Lake Titisee, Lake Zurich and Lake Maggiore. In 1877, Weismann worked for the first time at the Naples Zoological Station, with whose founder Anton Dohrn he was friends, where he extended his research to the marine forms of daphnoids, a taxon of crustaceans that was later called Cladocera and has since been dissolved.

In the 1870s, Weismann began working in the field of zoology as the director of the zoological institute at the University of Freiburg and started researching freshwater fish all over Europe. In his first works on evolutionary biology, Weismann compared creational theories with those of Charles Darwin. He examined both and was finally convinced of Darwin’s work. Weismann described the significance of meiosis for reproduction and inheritance in 1890 and he noted that two cell divisions were necessary to transform one diploid cell into four haploid cells if the number of chromosomes had to be maintained. Along with many other scientists (including Charles Darwin), Weismann believed that the observed variability of individuals of one species is due to the inheritance of sports. He believed, as written in 1876, that transmutation of species is directly due to the influence of environment.

“The world has been evolved, not created: it has arisen little by little from a small beginning, and has increased through the activity of the elemental forces embodied in itself, and so has rather grown than come into being at an almighty word.”
— August Weismann

In 1883, Weismann gave a talk titled ‘On Inheritance‘ and this was the first time, when he rejected the inheritance of acquired traits. Again, he attempted to explain individual examples with creation and evolution. Weismann tried to describe the existence of non-reproductive castes of ants, such as workers and soldiers, that cannot be explained by inheritance of acquired characters. Germ plasm theory, on the other hand, does so effortlessly. He used this theory to explain Darwin’s original examples for “use and disuse”, such as the tendency to have degenerate wings and stronger feet in domesticated waterfowl. Another field of research was the embryology of sea urchin eggs and he observed different kinds of cell division, namely equatorial division and reductional division. Weismann’s most important contribution to genetics is his postulate that changes due to environmental influences on the body (the soma) of an individual cannot have any effect on the phenotype of the following generation. This results from his theory of germplasm, which, according to his theory, is inherited by the next generation independently of the body cells in its own path, the germ line. As a result, changes in body cells cannot be passed on. This results in an influence that only points in one direction: changes in the germplasm cause changes in the body, but not vice versa. This insight is still known today as the Weismann barrier. This resulted in the rediscovery of Gregor Mendel‘s work on inheritance and disproved Lamarckism and telegony.

Weismann worked at the University of Freiburg for over 50 years. He made them well known both at home and abroad.. After about two weeks of illness, Weismann died of heart failure on 5 November 1914.