You are here: Home › biology › Andrea Cesalpino and the Classification of Plants 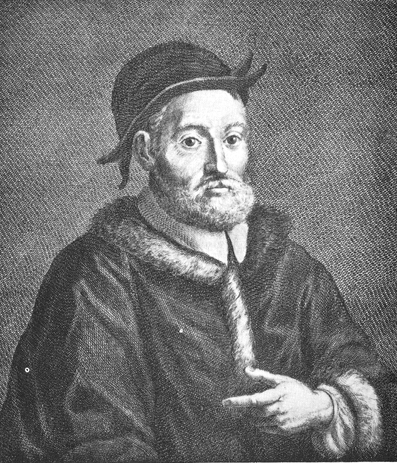 On February 23, 1603, Italian physician, philosopher and botanist Andrea Cesalpino passed away. He classified plants according to their fruits and seeds, rather than alphabetically or by medicinal properties. He helped establish botany as an independent science and also made contributions to medical science and physiology.

Andrea Cesalpino was probably born on June 5, 1525 in Arezzo, Tuscany. However, some sources suggest also 1519 as his actual year of birth. It is believed that his father was a simple mason, but also here, some doubt that because he was able to send his son to the university. Cesalpino studied philosophy and medicine at Pisa, where he received his doctorate in 1551. He studied under Vesalius [10] and Guido Guidi, and Luca Ghini. Starting from 1592, he was called to Rome as a physician to Pope Clement VIII while simultaneously working as a professor at Sapienza. [1,2]

Cesalpino’s research of the anatomy and physiology of the movement of the blood presumably count as his most important medical studies. He published several works on practical medicine including diseases of the heart and chest, as well as syphilis. Even though Cesalpino did not discover the major blood circulation, he found out that the heart is the center of the circulation of the blood. [1]

The Books of Plants

His most important contributions to science lies in the field of botany. De plantis libri XVI (The Books of Plants),  published in 1583 is widely considered his most important work. In it, Andrea Cesalpino presented his principles of botany. He published a total of 16 books of which the first consisted of 14 chapters. Cesalpino covered the nutrition of plants, structures of the flower, fruit, and seed. The botanist used his knowledge of Aristotle’s thoughts on biological classification and Theophrastus’s criteria for plant classification.[4] The 15 following books describe around 1500 plants, arranged according to Cesalpino’s system. His herbarium which he gave to his patron Bishop Tornabuoni is believed to be one of the oldest herbarium in existence and arranged according to his principles. It is now in the the Museum of Natural History in Florence. [3]

The basis for his scientific investigations was philosophy. Consequently, in his botanical research he went beyond the individual description of plants and sought to find the general out of the individual, the important out of the sensual given. He strove to classify plants on the basis of natural conditions and, through Aristotelian philosophical deductions, came to the conclusion that only the fructification organs were suitable for the construction of the most natural system. This led him to highly unnatural groups. But he was the first scientist to establish an ordered system of plants, which he divided into 5 classifications: 1. the group of arbores (trees); 2. the group of frutices (shrubs); 3. the group of suffrutices (shrub herbs); 4. the group of tlerhae (herbs) and 5. the group of seedless plants, to which he counted fungi, ferns, mosses and algae, among others. Accordingly, in his 16-volume work De plantis libri XVI he described the plants in this order.

Unfortunately for Andrea Cesalpino, his major work did not receive the attention it deserved. It is said that even for contemporaries, the work was hard to read with its dense prose which relied heavily on Aristotelian principles relating to the soul of plants but left much only implied and not fully stated. Also, there were no illustrations or tables to explain Cesalpino’s system. [3]

During his career, Andrea Cesalpino lectured in philosophy, medicine and botany. He became Director of the Pisa Botanic garden in 1554, succeeding Ghini who had set it up in 1547, one year after the first Botanic Garden in Padua. De Plantis Libris XVI was dedicated to the Grand Duke Francisco I de Medici, the fruit of nearly forty years of teaching and practical experience combining philosophy, medicine and botany. [3]