You are here: Home › anthropology › Alfred L. Kroeber and the Nature of Culture 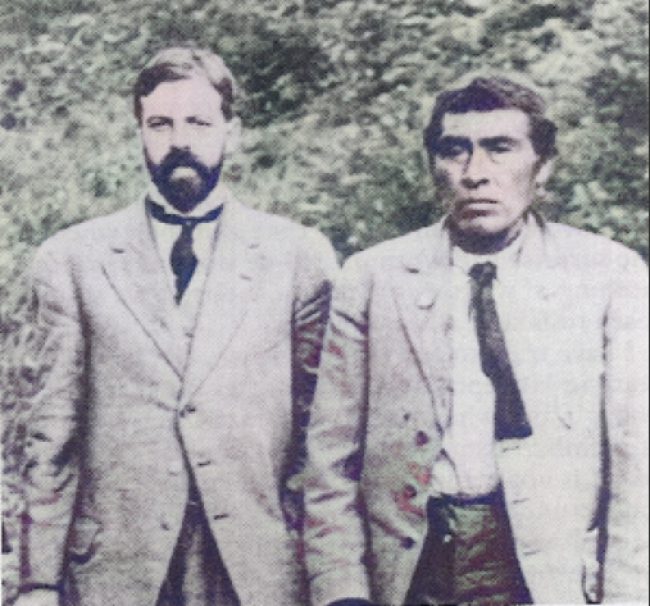 Alfred L. Kroeber with Ishi, the last known member of the Yahi tribe

On June 11, 1876, American cultural anthropologist Alfred Louis Kroeber was born. His primary concern was to understand the nature of culture and its processes. He developed the concept of cultures as patterned wholes, each with its own style, and each undergoing a growth process analogous to that of a biological organism. Kroeber also made valuable contributions to the archaeology of New Mexico, Mexico, and Peru.

“Anthropology is the most humanistic of the sciences and the most scientific of the humanities.”
– Alfred L. Kroeber

Alfred Kroeber  was born in Hoboken, New Jersey, USA; to upper middle-class parents: Florence Kroeber, who immigrated at the age of 10 to the United States with his parents and family from Germany, and Johanna Muller, who was of German descent. He grew up in New York and was educated in private schools. Due to his German roots, the family was bilingual, speaking German at home, and Kroeber also began to study Latin and Greek in school, beginning a lifelong interest in languages. Kroeber enrolled at Columbia College and earned his Masters degree in 1897 in Romantic drama. Kroeber then decided to change his field of research and devoted his life to anthropology. Kroeber received his Ph.D. under Franz Boas at Columbia University in 1901, basing his 28-page dissertation on decorative symbolism on his field work along the Arapaho. It was the first doctorate in anthropology awarded by Columbia.

Together with his fellow student Robert Lowie he formed a first generation of Boas students. Kroeber tried to strengthen Boaz’s cultural relativistic element. His most famous article is “the Super organic”, the Super organic of 1917: Kroeber sees culture as something beyond the organic. Accordingly, the super-organic of culture, the exclusively idealistic, is concentrated in so-called “key symbols” – with these culture can be fixed. According to Boas, every culture is relative, i.e. it can only be experienced and explained from within itself. A foreign culture cannot be explained and experienced by non-specialists. Therefore, cultures are never comparable. This view developed into a hard and a soft cultural relativism. Alfred Kroeber spent most of his career in California, mostly at the University of California, Berkeley as Professor of Anthropology and the Director of what was then the University of California Museum of Anthropology. Next to his achievements in cultural anthropology, Kroeber made significant advanced in the field of archaeology and anthropological linguistics as well. Kroeber conducted excavations in New Mexico, Mexico, and Peru. In Peru he also helped to found the Institute for Andean Studies (IAS) with the Peruvian anthropologist Julio C. Tello and other major scholars.

Together with his students, Alfred Kroeber collected cultural data on western tribes of Native Americans. Their work was devoted to preserving information about California tribes and was published in Handbook of the Indians of California in 1925. Alfred Kroeber described different levels of organization, for instance he described a pattern in California groups where a social unit was smaller and less hierarchically organized than a tribe, which was elaborated upon in The Patwin and their Neighbors in which Kroeber first coined the term “tribelet” to describe this level of organization. The scientist is further credited with developing the concepts of culture area, cultural configuration, and cultural fatigue.

Along with Roland B. Dixon, Alfred Kroeber performed studies on the genetic classification of Native American languages in North America, being responsible for theoretical groupings such as Penutian and Hokan, based on common languages. Kroeber’s textbook, Anthropology, was widely used for many years. In the late 1940s, it was one of ten books required as reading for all students during their first year at Columbia University. Further, Kroeber’s book titled Configurations of Cultural Growth was widely used in social scientific research.

Very early on he also became involved in psychoanalysis and Sigmund Freud‘s work;[6] the ethnopsychoanalyst Georges Devereux received his doctorate under Kroeber. Kroeber was an opponent of the American eugenics movement and in particular of Madison Grant’s race-theoretical theses. In a public statement in March 1914 he declared eugenics to be a “joke”.[7] At the end of his life, Kroeber realized that his role as guardian of the Boas theory was weakening and turned more and more to non-American developments in anthropology. Alfred L. Kroeber suffered a heart attack during a vacation he spent with his wife in Paris. They knew no one there except ethnologist Claude Lévi-Strauss, in whose arms Kroeber is said to have died on October 5, 1960, at age 84.