You are here: Home › biology › Alec Jeffreys and the Genetic Fingerprint 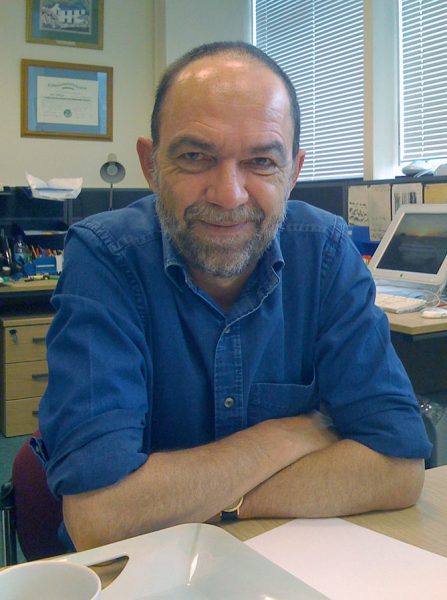 On January 9, 1950, British geneticist Alec Jeffreys was born. In 1984, Jeffreys developed techniques for DNA fingerprinting and DNA profiling which are now used worldwide in forensic science to assist police detective work and to resolve paternity and immigration disputes.

Alec John Jeffreys was born into a middle-class family in Oxford, UK, where he spent the first six years of his life until 1956, when the family moved to Luton, Bedfordshire. He developed an early interest in science, which was encouraged by his parents. When Alec Jeffreys grew up, his father is known to have supported his curiosity, even though an accident with sulphuric acid left a permanent scar on his chin. Less dangerously, Jeffreys also received a Victorian-era brass microscope from his father which he used to examine biological specimens. When starting to dissect animals around the age of 12, it is said that Alec Jeffreys got into some trouble after dissecting a dead cat he found on the street on top of the family dining table.

Jeffreys received a scholarship to study at Merton College, Oxford and graduated in 1972  in biochemistry. At the Genetics Laboratory at the University of Oxford Jeffreys completed his doctorate on the mitochondria of cultured mammalian cells. At the University of Amsterdam Alec Jeffreys began working on mammalian genes, moving to the University of Leicester in 1977 where Jeffreys worked on what he is best known for to this day: genetic fingerprinting.

In his laboratory at the University of Leicester, Alec Jeffreys researched minisatellites, hypervariable DNA regions in the human genome. Even though he was not interested in developing a genetic fingerprint, but instead examined blood samples from different family members side by side for these minisatellites, he immediately recognised the range of his discovery. The image of the minisatellites of the family members showed him that they can be assigned to each individual person like a barcode, but that they can also be read from family relationships. Even today, every genetic fingerprint is based on the variation he discovered for crime scene analysis and every paternity test or resolving immigration disputes.

Next to applications on humans, genetic fingerprinting also became important for wildlife population genetics studies. It took three years until the method became commercialized and one year until it was put to use when Jeffreys was asked to help in a disputed immigration case to confirm the identity of a British boy whose family was originally from Ghana. In the field of forensics DNA fingerprinting was first used in a police forensic test to identify the killer of two teenagers. The suspect was identified and convicted of their murders after samples taken from him matched semen samples taken from the two dead teenage girls. Since then, the method has become important in forensic science to assist police detective work, and it has also proved useful in resolving paternity and immigration disputes

Starting from 1985 Alec Jeffreys worked on DNA profiling, which was more sensitive, more reproducible and amenable to computer databases. DNA profiling was supported by the development of DNA amplification by the polymerase chain reaction. The most commonly used markers are now variable microsatellites, also known as short tandem repeats, which was refined by Peter Gill and his research team at the Forensic Science Service in the 1990s. Even today, every genetic fingerprint for crime scene investigation and every paternity test is still based on the variation he discovered. The first person convicted by this technique was the double murderer Colin Pitchfork.

Alec Jeffreys has also been examining DNA mutations and cross overs since the 1980s by observing minisatellites. Along with Professor Yuri Dubrova from the NI Vavilov Institute of General Genetics, Moscow, Jeffreys has studied almost 80 families around Chernobyl in Belarus where in 1986 a tragical nuclear accident occured. The goal is to find out whether the living environment has an impact on the mutation or whether it comes from the genes only. The researchers found that the genetic mutation rate in the Chernobyl area was especially high, meaning that parents in that area pass on mutations to their children more than anywhere else. However, conclusions cannot be drawn to early, since stress and stress-related habits like smoking are likely to also affect the people’s health, next to the radiation issues.

His research results have helped Jeffreys to win numerous awards and prizes. Among others, he was knighted in 1994 by Queen Elisabeth II as Knight Bachelor. Other awards include the William Allan Award (1992) and the Albert Einstein World Award of Science, which he received in 1996. He was awarded the Royal Medal of the Royal Society in 2004 and the Copley Medal in 2014.