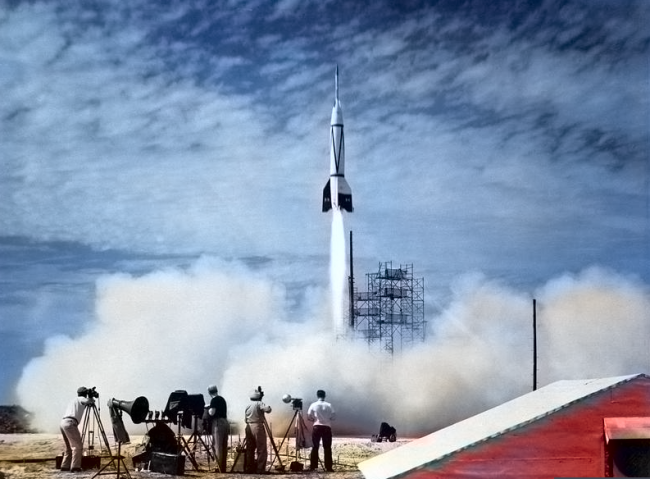 On July 24, 1950, Bumper 8, a modified German World War II A4 rocket, became the first ever rocket to be launched from Cape Canaveral. Cape Canaveral already became the test site for missiles the year before, and was chosen for rocket launches to take advantage of the Earth’s rotation, because of its southern location.

In 1949, U.S. President Harry Truman established the Joint Long Range Proving Grounds at Cape Canaveral to test missiles. The location had the great advantage that it allowed launches over the Atlantic Ocean and is closer to the equator which allows rockets to get a boost from Earth‘s rotation. On May 17, 1950, the base was renamed the Long Range Proving Ground Base. However, about three months later the base was renamed Patrick Air Force Base, in honor of Army Maj. Gen. Mason Patrick. In 1951, the Air Force established the Air Force Missile Test Center. In order to study problems pertaining to two-stage, high-speed rockets, the RTV-G-4 Bumper rocket was built by the Unites Sates as a combination of the A4 rocket and WAC Corporal sounding rocket. The tests began in May 1948 and while the first six were performed in White Sands, the seventh (Bumper 8) became the first ever rocket to be launched from Cape Canaveral.

Beginning life as a weapon, the German A4 [6] was impressed into peaceful service after the war at the United States’ White Sands Missile Range as well as the Soviet Union’s Kapustin Yar. This led to a flourishing of missile designs setting the stage for the exploration of space. The Bumper was the first multi-stage rocket to use liquid propellants. The first stage was a modified A4 missile captured in Germany towards the end of World War II, while the second stage was a modified version of the American WAC missile. Bumper employed the A4 as first stage and the WAC Corporal as second stage. In a typical flight, the A4 engine would fire first, taking the Bumper combination to an altitude of 32 km, at which point the WAC Corporal would be released under its own power. This separation occurred before A4 Brennschluss (engine cutoff) to ensure that the WAC Corporal had a stable, actively controlled platform to lift off from, and also so that the A4 would impart close to maximum possible speed to the Bumper’s second stage. No German engineers were directly involved with Project Bumper, though some worked on the initial studies regarding the mating of the A4 and WAC corporal. The Bumper was started six times from the White Sands Missile Range and twice from Cape Canaveral. However, only three of the eight attempts were successful. Both altitude and speed records were set:

Further sub-orbital rocket flights were achieved at Cape Canaveral in 1956 and after the Soviet Union‘s successful Sputnik 1, the first launch of an artificial satellite from Cape Canaveral was attempted in 1957. Unfortunately, the rocket carrying Vanguard TV3 blew up on the launch pad.

In 1958, NASA was founded and to its early manned spaceflight programs belonged Mercury and Gemini followed by several launches in preparation for the Apollo program, which required the Saturn family of rockets. The first four Saturn I development launches were made between October 1961 and March 1963. The final test launch and five operational launches took place in 1964 and ’65. The unmanned, first Earth orbital test flight of the Apollo Lunar Module took place in 1968 and in the early 1970s, NASA modified the Kennedy Space Center launch complex to handle the Saturn IB for the Skylab and Apollo-Soyuz Test Project launches.