You are here: Home › chemistry › Paul Walden and the Walden Inversion 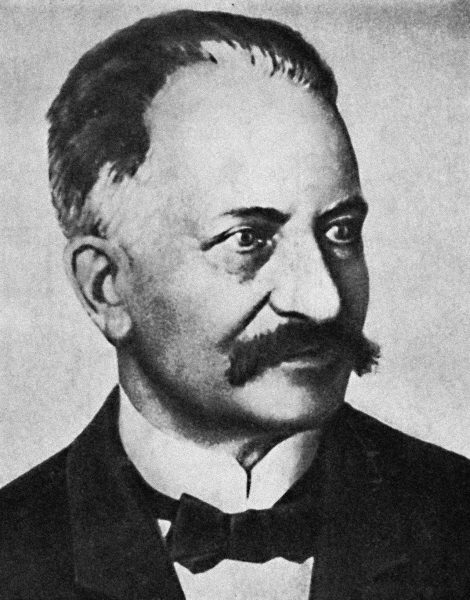 On July 26, 1863, Russian and Latvian-German chemist Paul Walden was born. Walden is known for his work in stereochemistry and history of chemistry. In particular he invented the stereochemical reaction known as Walden inversion and synthesized the first room-temperature ionic liquid, ethylammonium nitrate.

Born in Latvia among 13 Children

Paul Walden was born in Rozula in present-day Stalbe parish, Pārgauja municipality, Latvia as the youngest of 13 children in a peasant family. Already at the early age of four, he lost his parents and was supported by his two older brothers in Riga who paid for Walden to be sent to a German boarding school, where he learned both German and Russian. Walden managed to complete his education at the Riga Technical High School, where he graduated in 1882. Next, he enrolled into the Riga Technical University and became seriously interested in chemistry. In 1886, he published his first scientific study on the color evaluation of the reactions of nitric and nitrous acid with various reagents and establishing the limits of sensitivity of the color method to detection of nitric acid. In 1887, he was appointed a member of the Russian Physico-Chemical Society. During this time, Walden started his collaboration with Wilhelm Ostwald, who later was awarded the Nobel Prize in Chemistry 1909 for his work on catalysis, chemical equilibria, and reaction rates.

In 1888, Walden graduated from the University with a degree in chemical engineering and continued working at the Chemistry Department as an assistant to professor Carl Bischof, a professor in the department who had also mentored Walden as a student, where Walden began compiling “Handbook of Stereochemistry” which was published in 1894. In preparation of this handbook, Walden had to perform numerous chemical syntheses and characterizations which resulted in 57 journal papers on stereochemistry alone, published between 1889 and 1900. He also continued his research in the field of physical chemistry, establishing in 1889 that the ionizing power of non-aqueous solvent is directly proportional to the dielectric constant. During the summer vacations of 1890 and 1891, Walden was visiting Ostwald at the University of Leipzig and in September 1891 defended there a master thesis on the affinity values of certain organic acids. Ostwald suggested him to stay in Leipzig as a private lecturer, but Walden declined, hoping for a better career in Riga.

In 1892 he was appointed assistant professor of physical chemistry and a year later he defended his doctorate on osmotic phenomena in sedimentary layers. In September 1894 Walden was appointed professor of analytical and physical chemistry at the Riga Technical University. In 1895, Walden made his most remarkable discovery which was later named Walden inversion, so named by Emil Fischer, in which one optical isomer is converted into its optic antipode by the action of specific reagents so that a change in absolute configuration occurs. Because it did not coincide with existing representations of substitution reactions, the Walden inversion elicited an extended discussion. The mechanism of Walden inversion was clarified in 1934-1937 by E. D. Hughes and C. K. Ingold.[2] This topic became the basis for his habilitation thesis defended in March 1899 at St. Petersburg University. After that, Walden became interested in electrochemistry of nonaqueous solutions. In 1902, he proposed a theory of autodissociation of inorganic and organic solvents. In 1905, he found a relationship between the maximum molecular conductivity and viscosity of the medium and in 1906, coined the term “solvation”. Together with his work on stereochemistry, these results brought him to prominence; in particular, he was considered a candidate for the Nobel Prize in Chemistry in 1913 and 1914.

After 1915, due to the difficulties caused by the World War I, political unrest in Russia and then October Revolution, Walden had reduced his research activity and focused on teaching and administrative work, taking numerous leading positions in science. Due to the political unrest in Latvia, Walden had immigrated to Germany together. He was appointed as professor of inorganic chemistry at the University of Rostock where he worked until retirement in 1934. In 1924 he was invited back to Riga, where he gave a series of lectures. He was offered leading positions in chemistry in Riga and in St. Petersburg, but declined. Despite his emigration, Walden retained his popularity in Russia, and in 1927 he was appointed as a foreign member of the Russian Academy of Sciences.

After retiring in 1934 he devoted himself almost exclusively to the history of chemistry and collected a unique library of over 10,000 volumes. The library and his house were destroyed during the British bombing of Rostock in 1942. He received honorary doctorates from several universities, was elected a member of scientific academies, and was an honorary member of the Chemical Society of London.[2] Walden moved to Berlin and then to Frankfurt am Main where he became a visiting professor of the history of chemistry at the local university. He met the end of World War II in the French Occupation Zone, cut off the Rostock University, which was located in the Soviet Zone, and thus left without any source of income. He survived on a modest pension arranged by German chemists, giving occasional lectures in Tübingen and writing memoirs. In 1949, he published his most well known book on “History of Chemistry“. He died in Gammertingen in 1957 at the age of 93.