You are here: Home › psychology › Marie-Louise von Franz and the Psychology of Fairy Tales 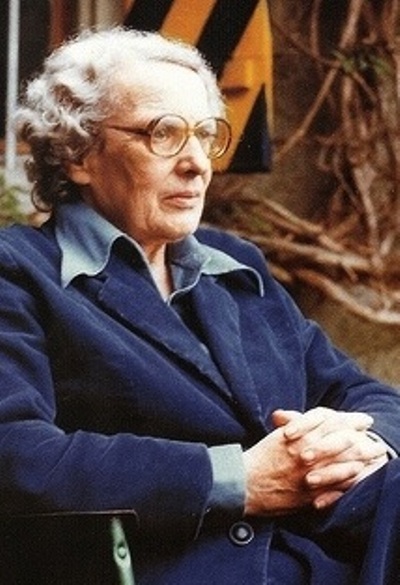 On January 4, 1915, Swiss Jungian psychologist and scholar Marie-Louise von Franz was born. Von Franz is renowned for her psychological interpretations of fairy tales and of alchemical manuscripts. Her research showed common themes in tales from many cultures, which she linked with experiences in daily life.

“The ego must be able to listen attentively and to give itself, without any further design or purpose, to that inner urge toward growth. “
— Marie Louise von Franz, “The Process of Individuation” – Part 3 in Man and His Symbols (1961)

Marie-Louise Ida Margareta von Franz was born in Munich, Germany, the daughter of Margret Susanne, née Schoen and Baron Erwin Gottfried von Franz (1876-1944), an Austrian colonel in the general staff of the Austro-Hungarian army. From 1919 she lived in Switzerland, in the rural Rheineck in the canton of St. Gallen. She attended a high school in Zurich, specializing in languages and literature. Around the age of 18, she and a few classmates met the psychiatrist Carl Gustav Jung discussing psychology which highly influenced the young woman.[1]  Also in 1933, M.-L. von Franz began her studies of classical philology and languages (Latin, Greek) as main subjects and literature and ancient history as subsidiary subjects at the University of Zurich, which she completed “summa cum laude” in 1940 with her doctorate on “Die ästhetischen Anschauungen der Iliasscholien” (The Aesthetic Views of the Iliads).

Next to her own studies at the University of Zurich, von Franz attended Carl Gustav Jung’s psychological seminars and lectures. She started analytical training with Jung in 1934 and paid Jung by translating works for him from Greek and Latin texts including Thomas Aquinas’ Aurora Consurgens and Musaeum Hermeticum.[2] Since numerous passages in it came from treatises of Islamic-Persian origin, she also added Arabic to her subjects. Von Franz’ collaboration with Carl Gustav Jung lasted until his death in 1961. The experience of what C. G. Jung called the objective psyche or the collective unconscious shaped her life and work just as much as her confrontation with the reality of this layer of the psyche, which faces consciousness autonomously.

Fairy Tales and their Psychological Interpretation

In 1935, narrative researcher and private scholar Hedwig von Beit asked Marie-Louise von Franz to assist her part-time with writing a book about fairy tales. Von Franz indulged into a time-consuming 9-years research and interpretation work. Fairy Tales then became important for her regarding psychological questions. The work was published in the book “Symbolik des Märchens” (Symbolism of Fairy Tales) even though it was published under the name of Hedwig von Beit. Von Franz later also connected fairy tale interpretation with everyday life and according to Alfred Ribi, she became known as the first to discover and demonstrate the psychological wisdom of fairy tales.

Marie-Louise von Franz’ interpretation of fairy tales bases on Jung‘s view of fairy tales as a spontaneous and naive product of soul, which can only express what soul is. Thus, she looks at fairy tales as images of different phases of experiencing the reality of the soul. The hero and heroine of a fairy tale that the auditory identified are taken as archtypical figures and represent the archetypal foundation of the ego-complex of an individual or a group. G. Isler explains that „The figure of the hero as well as the whole story compensate what initially was an insufficient or wrong attitude of consciousness. The initial situation of need, misery and shortcomings is solved at the end having a structure which is more whole than the beginning. This corresponds to a renewal of the ruling consciousness, being oriented towards psychic wholeness and totality in a way that is more appropriate” to the demands of the Self, than before. “Fairy tales compensate individual consciousness, but also an insufficient attitude of collective consciousness, which in European culture has been coined mainly by Christianity.” In contrast to personalistic-subjective ways of interpretation, the fate of the hero is not understood as individual neurosis, but as difficulties and dangers, being imposed on man by nature.

For many years Marie-Louise von Franz lived very modestly and earned her living as a tutor for Latin and Greek for high school students and students. During her career, von Franz became first an associate member and later a full member of the Psychological Club, Zurich. She was co-founder of the C.G. Jung Institute in Zurich and founded the “Stiftung für Jung’sche Psychologie” (Foundation for Jungian Psychology) along with several colleagues in 1974.

Between the 1950s and 1970s, von Franz travelled widely, not only for holidays but also for lecturing. She visited European countries including Austria, England, Germany, Greece, Italy and Scotland, as well as America, Egypt and some Asian countries. After 1986 she turned to a more introverted life at her home in Küsnacht, Switzerland. During her last years, von Franz had Parkinson’s disease. Marie-Luise von Franz died on 17 February 1998 aged 83 in Küsnacht, Switzerland.