You are here: Home › aviation › Hubertus Strughold the Father of Space Medicine with a Dark Past 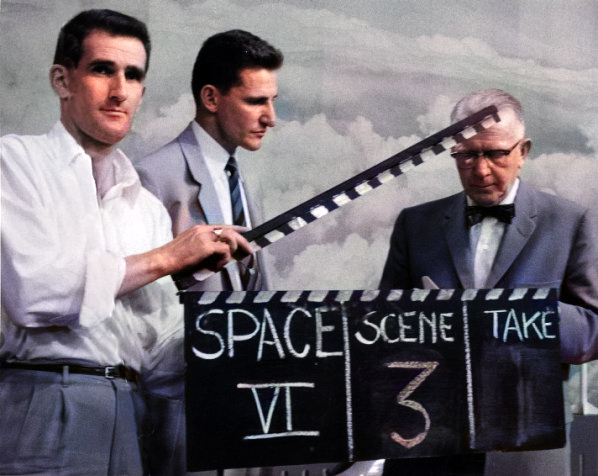 Man with a clapperboard as a scene is ready to be filmed. Production shot from KUHT-TV’s Doctors in Space program with Drs. John Rider (center) and Hubertus Strughold (right), c. 1953.

On June 15, 1898, German-born physiologist and prominent medical researcher Hubertus Strughold was born. For his role in pioneering the study of the physical and psychological effects of manned spaceflight he became known as “The Father of Space Medicine“. In the late 1920’s, he began investigating the physiological aspects of what he called the “vertical frontier” in Germany. He served as chief of Aeromedical Research for the German Luftwaffe throughout World War II. In 1947 he was brought to the United States as part of Operation Paperclip and held a series of high-ranking medical positions in both the US Air Force and NASA.

Hubertus Strughold was born in the town of Westtünnen-im-Hamm in the Prussian province of Westphalia on 15 June 1898. He studied medicine and natural science at the Ludwig Maximilian University of Munich and the Georg August University of Göttingen.  In 1922, he received his doctorate in Münster, and one year later in Würzburg, where he received his doctorate in medicine. The subject of his first dissertation was the effect of the warfare agents diphenylarsine chloride (blue cross substance) and ethylarsine dichloride on human skin. As assistant to Max von Frey, Strughold first worked at the Physiological Institute in Würzburg, later at the same institute in Freiburg. In 1927 he habilitated in sensory physiology. The following two years Strughold was a Rockefeller Foundation Fellow at the Physiological Institutes of Western University in Chicago and Cleveland. Back in Würzburg he took over a teaching position for flight physiology in 1929. From 8 March 1933 he was associate professor of physiology in Würzburg.

On April 1, 1935, Strughold moved to Berlin to the Reich Aviation Ministry. In Berlin, he took over as head of the newly founded Aviation Medical Research Institute at the university, the leading aviation medical institute in Germany. Here all questions of basic and applied research in military medicine were dealt with. The establishment pioneered in various fields including the study of the medical effects of high-altitude and supersonic speed flight. From 1936 he was co-editor of the journal Luftfahrtmedizin (Aviation Medicine). In the following year he became a corresponding member of the German Academy of Aeronautical Research. In 1941 Strughold was elected a member of the Leopoldina, the German national academy of science. After the start of World War II, the institute was absorbed into the German Luftwaffe and Hubertus Strughold was commissioned as an officer in the German air force. It is believed that as part of their research, prisoners from the Dachau concentration camp were used as human test subjects. Many of them lost their lives during these experiments and to this day, it is not completely known to what extent Strughold was involved in the planning of the experiments. In 1942, a series of negative pressure experiments was carried out at the von Strughold Institute, among others by Hans Nachtsheim, on six children suffering from epilepsy from a psychiatric clinic in Brandenburg-Görden. In 1944, he was appointed to the rank of Colonel Physician Consultant Aeronautical Medicine at the Chief of Medical Services of the Air Force.

A Paperclip Scientist and Space Medicine

After the war, Hubertus Strughold became director of the Physiological Institute at Heidelberg University and also began working on behalf of the US Army Air Force. He was never accused in connection with Nazi crimes; he contributed several affidavits to the Nuremberg medical trial for the defense of the defendants there. He was brought to the United States in 1947 as part of Operation Paperclip, and he began conducting some of the first research into the potential medical challenges posed by space travel, in conjunction with fellow ‘Paperclip Scientist’ Heinz Haber. One year later, Strughold coined the term space medicine and was appointed the first and only Professor of Space Medicine at the US Air Force’s newly established School of Aviation Medicine. In the 1950s, Strughold managed to revolutionize the so far existing notions concerning spaceflight when he co-authored the research paper Where Does Space Begin?. In it, the scientist proposed that space was present in small gradations that grew as altitude levels increased, rather than existing in remote regions of the atmosphere. The scientist obtained US citizenship in 1956 and was named chief scientist of the National Aeronautics and Space Administration’s Aerospace Medical Division in 1962.

During his work at NASA, Strughold was subject of several government investigations for his work during World War II. Strughold’s alleged connection to the Dachau experiments became more widely known following the release of US Army Intelligence documents from 1945 that listed him among those being sought as war criminals by US authorities, which caused a great damage to the scientist’s reputation and the revocation of several honors that he received during his lifetime. In 1983 he was awarded the Federal Cross of Merit. In 1985, the Senate in Texas declared a Hubertus Strughold Day in his honour. He died on September 25, 1986, in San Antonio, Texas, at the age of 88. Since 1963, the Space Medicine Branch of the Aerospace Medical Association has presented the Strughold Award to deserving scientists in the field of aviation medicine; this award was scheduled for 2014. Ten years earlier, the German Society for Aerospace Medicine DGLRM separated from the science prize of the same name (2004), and Strughold’s name was also removed from the International Space Hall of Fame in Alamogordo (New Mexico) in 2006.[5]