You are here: Home › women in technology › Herrad of Landsberg and the Garden of Delights

Herrad of Landsberg was a 12th-century Alsatian nun and abbess of Hohenburg Abbey in the Vosges mountains. She is known as the author of the pictorial encyclopedia Hortus Deliciarum (The Garden of Delights).

It is assumed that Herrad of Landsberg was born around 1130. Hohenburg Abbey, also known as Mont St Odile, was run by Abbess Relinda, a nun sent from the Benedictine monastery of Bergen in Bavaria. Due to her support from the Holy Roman Emperor Frederick Barbarossa [5] the abbey was extremely successful and powerful, as well as a source for reform. At the abbey Herrad received the most comprehensive education available to women during the 12th century. At the age of 35, she was supposed to have begun with ‘Hortus Deliciarum‘ within the cloister walls in order to support her fellow nun’s education. She became abbess of Hohenburg Abbey about two years later and succeeded her teacher Relindis. As abbess, Herrad worked on rebuilding the monastery, as well as consolidating the land surrounding the monastery under its ownership. Herrad was abbess for 28 years, and continued in that office until her death in 1195. Adelhaid of Faimingen was her successor. 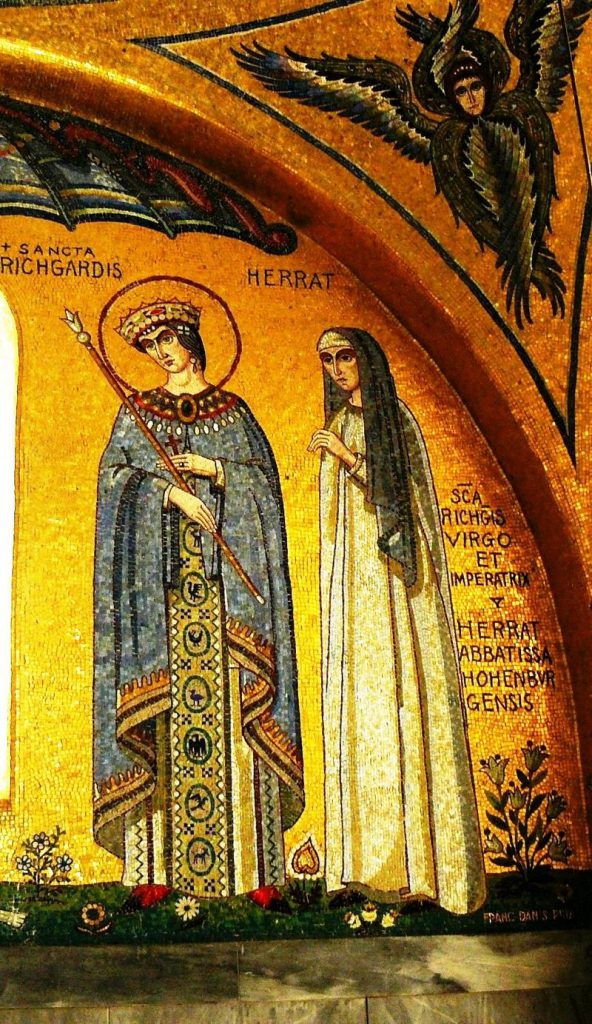 Mosaic in the Chapel of Tears showing Saint Richarde (841-862), daughter of Erchanger of Swabia, Count Palatine of Nordgau and wife of Charles the Great (left), and the abbess Herrad of Landsberg (left).

The Garden of Delights

The Garden of Delights was a compendium of all the sciences studied at that time, including theology and written in Latin language. Throughout the work, the author researches on the battle of Virtue and Vice with the help of over 300 lively illustrations preceding the text. The original manuscript consisted of 648 pages on 324 parchment sheets.

Copy after the original of the Hortus Deliciarum before its destruction, made by A. Straub – Coll. Bibliothèque du Grand Séminaire de Strasbourg

The work became widely famous for the many illustrations. Many of them are symbolical representations of theological, philosophical, historical and literary themes. Others were created out of personal experiences by the artist and also many portraits of her sisters in religion are included. The illuminated manuscript begins with the creation of the angels and Lucifer’s glory and fall, with world creation and fall. It shows the way of human misery in fratricide, the Flood and the Tower of Babel and points to the attempts of mankind before Christ to rise up again by its own power. In this context, science appears in the form of the Seven Liberal Arts; the representatives of the philosophy of antiquity, Socrates and Plato appear. But it is also warned against the seductive powers of idolatry and superstition. The work is considered so special, because it was the first known encyclopedia written by a woman and it is admired for the artistic imagination, which was not seen very often in contemporary artists. But the work does not only live from its imagery. The sentiment of the text is often referred to as very musical and above all admirably adapted to the purpose for which they were intended, namely, the service of God by song. The work contains numerous quotes from the Bible and from church fathers.

However, it is by no means a mere string of compiled knowledge. The intention is nothing less than a depiction of the universal church and the salvation thoughts of God realized in it, starting with the creation of the world, through the history of the Old Testament with its mysterious prerepresentations of Christ’s events up to the apparition of Jesus Christ himself. While other artists and writers contributed to the Hortus Deliciarum, it was largely compiled, written, and edited by Herrad. Many of the poems and hymns were written by Herrad, and it is speculated that much of the art was created under the direction of Herrad as well.

The Garden of Delights was preserved for many centuries at the Hohenburg Abbey. After the great fire of 1546, which almost completely destroyed the monastery buildings, the last abbess Agnes von Oberkirch handed over the property of the monastery to the Bishop of Strasbourg, and so the Hortus Deliciarum came to the episcopal archives in Zabern. The manuscript was later found in the Carthusian monastery in Molsheim, where a copy of the text was made in the 17th century. During the French Revolution, the manuscript came to the Strasbourg District Library.

Unfortunately, the original manuscript was burned in the night of 24 to 25 August 1870 during the siege of Strasbourg during the Franco-Prussian War at the University Library of Strasbourg, where it was kept during that time. Only reproductions, including a facsimile of 1818 created by Christian Moritz Engelhart, which in the meantime has become almost as valuable, and which even attracted Johann Wolfgang von Goethe‘s attention, have been preserved.[6]