You are here: Home › philosophy › George Edward Moore and the Naturalistic Fallacy 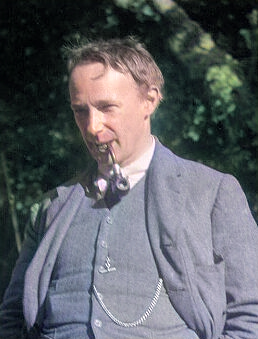 On November 4, 1873, English philosopher George Edward Moore  (G. E. Moore) was born. Moore was, with Bertrand Russell, Ludwig Wittgenstein, and  Gottlob Frege, one of the founders of the analytic tradition in philosophy. Along with Russell, he led the turn away from idealism in British philosophy, and became well known for his advocacy of common sense concepts, his contributions to ethics, epistemology, and metaphysics.[7]

George Edward Moore was born in Upper Norwood, Croydon, Greater London, the middle child of seven of Dr Daniel Moore and Henrietta Sturge. He was educated at Dulwich College and in 1892 went up to Trinity College Cambridge to study classics. He soon made the acquaintance there of Bertrand Russell who was two years ahead of him and of J. M. E. McTaggart who was then a charismatic young Philosophy Fellow of Trinity College. Under their encouragement Moore decided to add the study of Philosophy to his study of Classics, and he graduated in 1896 with a First Class degree in the subject.[1]

Cambridge became the Center of Philosophy

He won a “Prize” Fellowship of Trinity in 1898 that enabled him to continue the study of philosophy there. Moore’s Fellowship ended in 1904 and he left Cambridge for a period of seven years, during which time he lived in Edinburgh and Richmond, Surrey, and worked independently on various philosophical projects. He returned there in 1911 to a lectureship in the University in Moral Science and he then lived there for the rest of his life, apart from an extended visit to the U.S.A. in 1940-44. He earned a Litt.D. in 1913, was elected a fellow of the British Academy in 1918.[2] In 1921 he became editor of Mind, the leading British philosophical journal, and in 1925 he became a Professor at Cambridge on the chair of Mental Philosophy and Logic. These two appointments confirmed his position as the most highly respected British philosopher of the time, and with Wittgenstein back in Cambridge after 1929, Cambridge became the most important centre of philosophy in the world. Moore retired as Professor in 1939 to be succeeded by Wittgenstein.[8]

Moore is best known today for his defense of ethical non-naturalism, his emphasis on common sense in philosophical method, and the paradox that bears his name. He was admired by and influential among other philosophers, and also by the Bloomsbury Group, but is unlike his colleague Bertrand Russell mostly unknown today outside of academic philosophy. Moore’s essays are known for their clear, circumspect writing style, and for his methodical and patient approach to philosophical problems. He was critical of modern philosophy for its lack of progress, which he believed was in stark contrast to the dramatic advances in the natural sciences since the Renaissance. Among Moore’s most famous works are his book Principia Ethica (1903), and his essays, “The Refutation of Idealism” (1903), “A Defence of Common Sense” (1925), and “A Proof of the External World” (1939). Principia Ethica is one of the main inspirations of the movement against ethical naturalism and is partly responsible for the twentieth-century concern with meta-ethics.

Moore asserted that philosophical arguments can suffer from a confusion between the use of a term in a particular argument and the definition of that term (in all arguments). He named this confusion the naturalistic fallacy. For example, an ethical argument may claim that if a thing has certain properties, then that thing is ‘good.’ A hedonist may argue that ‘pleasant’ things are ‘good’ things. Other theorists may argue that ‘complex’ things are ‘good’ things. Moore contends that even if such arguments are correct, they do not provide definitions for the term ‘good.’ The property of ‘goodness’ cannot be defined. It can only be shown and grasped. Any attempt to define it (X is good if it has property Y) will simply shift the problem.

Moore further argued that, once arguments based on the naturalistic fallacy had been discarded, questions of intrinsic goodness could only be settled by appeal to what he called “moral intuitions” (self-evident propositions which recommend themselves to moral reflection, but which are not susceptible to either direct proof or disproof), a view often described as Ethical Intuitionism. However, as a Consequentialist, Moore distinguished his view from those of Deontological Intuitionists, who held that “intuitions” could determine questions about what actions are right or required by duty. He argued that “duties” and moral rules could be determined by investigating the effects of particular actions or kinds of actions, and so were matters for empirical investigation rather than direct objects of intuition.[3]

A Defender of Commonsense Realism

In epistemology, Moore is remembered as a stalwart defender of commonsense realism. Rejecting skepticism on the one hand, and, on the other, metaphysical theories that would invalidate the commonsense beliefs of “ordinary people” (non-philosophers), Moore articulated three different versions of a commonsense-realist epistemology over the course of his career. In ethics, Moore is famous for driving home the difference between moral and non-moral properties, which he cashed-out in terms of the non-natural and the natural. [2]

Moore is also remembered for drawing attention to the peculiar inconsistency involved in uttering a sentence such as “It is raining but I do not believe it is raining.” — a puzzle which is now commonly called “Moore’s paradox.” The puzzle arises because it seems impossible for anyone to consistently assert such a sentence; but there doesn’t seem to be any logical contradiction between “It is raining” and “I don’t believe that it is raining.” because the former is a statement about the weather and the latter a statement about a person’s belief about the weather, and it is perfectly logically possible that it may rain whilst a person does not believe that it is raining. In addition to Moore’s own work on the paradox, the puzzle also inspired a great deal of work by Ludwig Wittgenstein, who described the paradox as the most impressive philosophical insight that Moore had ever introduced. It is said that when Wittgenstein first heard this paradox one evening, which Moore had earlier stated in a lecture, he rushed round to Moore’s lodgings, got him out of bed and insisted that Moore repeat the entire lecture to him.