You are here: Home › art › Donato Bramante and the Invention of the High Renaissance Style 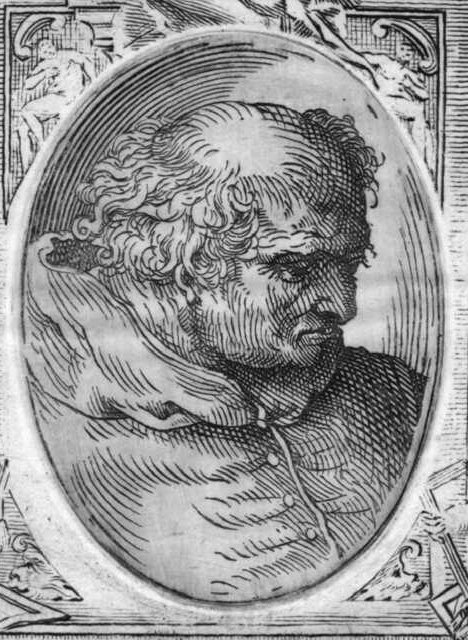 On April 11, 1514, Italian architect Donato Bramante passed away. He introduced Renaissance architecture to Milan and the High Renaissance style to Rome, where his plan for St. Peter’s Basilica [3] formed the basis of design executed by Michelangelo.[1] His Tempietto (San Pietro in Montorio) marked the beginning of the High Renaissance in Rome (1502) when Pope Julius II appointed him to build a sanctuary over the spot where Peter was allegedly crucified.

Bramante was born under the name Donato d’Augnolo,Donato di Pascuccio d’Antonio, or Donato Pascuccio d’Antonio[citation in Urbania near Urbino in July 1444. Donato Bramante received his training as an architect in Urbino from Luciano Laurana. Bramante first came into contact with painting at the court of the Montefeltro in Urbino. He showed a great taste for drawing, and was at an early age placed under Fra Bartolommeo, called Fra Carnavale. He appears to have studied under Scirro Scirri, an architect in his native place, and perhaps under other masters. He then set out from Urbino, and proceeded through several of the towns of Lombardy, executing works of various magnitudes, and examining patiently all remains of ancient art. At last, attracted by the fame of the great Duomo, he reached Milan, where he remained from 1476 to 1499.

From Milan to Rome

In 1477 he worked as a façade painter in Bergamo. In 1479 he stayed at the court of the Sforza in Milan, where he executed his first buildings. Around 1499 Bramante came to Rome. There he trained himself on the ancient ruins of the city and gradually developed his architectural style in the direction of the so-called High Renaissance architecture, of which he is regarded as the founder. He painted some frescoes at Rome, and devoted himself to the study of the ruins of the Roman Empire with their large-scale, harmonious monumentality both in the city and as far south as Naples. About this time the Cardinal Caraffa commissioned him to rebuild the cloister of the Convent della Pace. Owing to the celerity and skill with which Bramante did this, the cardinal introduced him to Pope Alexander VI. He began to be consulted on nearly all the great architectural operations in Rome, and executed for the pope the palace of the Cancelleria or chancery. 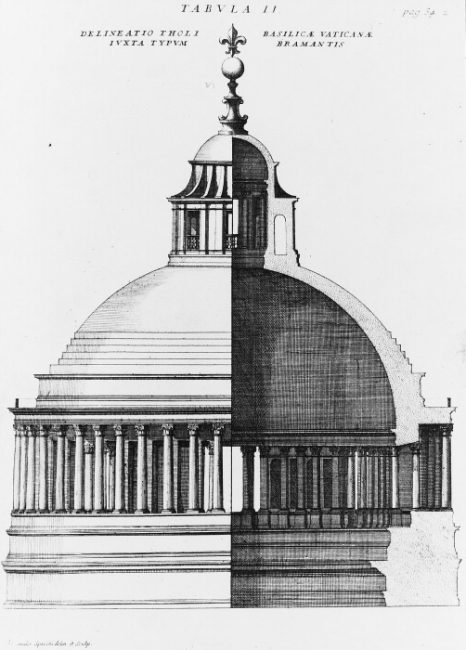 The dome of St Peter’s Basilica, as planned by Bramante

Bramante encountered an extremely stimulating artistic climate in Rome, which was provided for from 1503 onwards by Pope Julius II, the successor of Alexander VI. Besides Bramante, the pope employed a whole series of other important artists. Among them were Giuliano da Sangallo and Michelangelo. Bramante prevailed against both of them when the new building of the St. Peter’s Basilica was at stake from about 1504. Julius II. blessed Bramante’s designs and so, in 1506, the new building was started under Bramante’s responsibility. Other works of Bramante’s first Roman period are the choir of Santa Maria del Popolo, the extension of the Belvedere court, etc.

St Peter’s Basilica and the Reconstruction of the Vatican

The most majestic creation, not only of Bramante and of the High Renaissance, but in fact of Christian art, is the new St. Peter’s. According to Vasari, this was intended originally to enclose the magnificent tomb of Julius II, begun by Michaelangelo. But on account of the hopelessly ruinous condition of the old St. Peter’s, its rebuilding became an immediate necessity and, indeed, was determined upon shortly after the accession of Julius II, probably in connexion with the reconstruction of the Vatican. As early as 18 April, 1506, the cornerstone of the pier of St. Helena was laid, and a year later those of the other three piers at the transept were in position. The ways and means employed by Bramante in dealing with the old building brought him many reproaches for his lack of sentiment, and earned for him the nickname of Ruinante. Nevertheless, the incomparable significance of this creation must not be overlooked because of such romantic sentiments, nor must it be forgotten that the pope had Bramante’s plan carried out in spite of all remonstrances and of the enormous cost.[6]

Julius II probably commissioned Bramante to connect the Belvedere to the city immediately after his election as pope in 1503, but the first preserved invoice dates from 1512, when work was still in progress. For this purpose, Bramante created a 19-metre-high staircase supported by columns that rose spirally without steps and could also be used by riders. Seen from the outside, the staircase appears as a tower with a square floor plan, only the round arch windows of different heights on the top level give an indication of the ascending ramp inside. 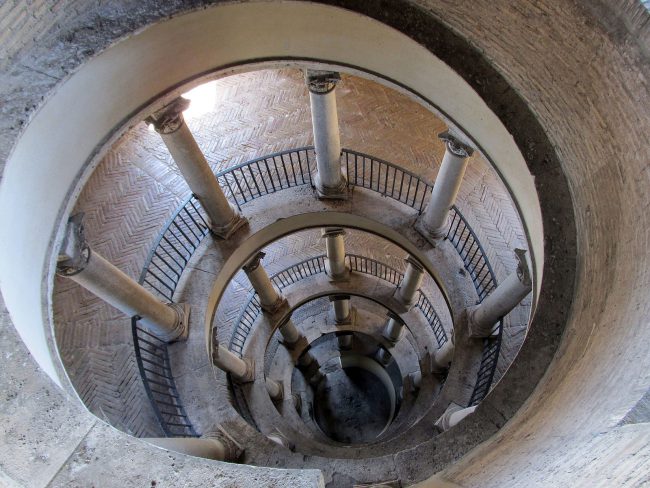 This consists of four full and half spiral turns, which are provided on the inside with a total of 36 columns made of grey granite. The order of the columns changes with each spiral turn. The 8 columns in Tuscan order of the lowest turn are followed by 8 columns in Doric and Ionic order, and finally 12 columns in composite order. The diameter of the columns almost halves on the way from the bottom to the top, their length remains the same. The inclination of the windings is compensated by scamilli, blocks with triangular cross section below the bases and above the capitals made of travertine.

This original Bramante staircase (Scala del Bramante in Italian) is in the Museo Pio-Clementino. At the exit of the Vatican Museums there is another spiral staircase: a double spiral staircase created by Giuseppe Momo in 1931/32. Because of its architectural similarity, it is also sometimes referred to as the “Bramante Staircase”.

When Bramante died on 11 April 1514, one year after the death of his patron Pope Julius II, the four dome pillars and a provisional choir, begun according to plans for a central building, were in place; above St Peter’s tomb there was a shelter (tegurio).