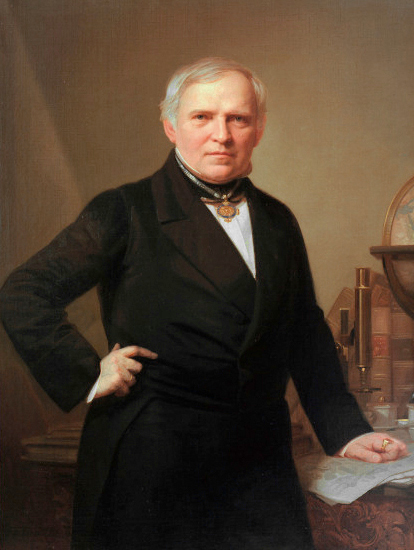 On April 19, 1795, German naturalist, zoologist, comparative anatomist, geologist, and microscopist Christian Gottfried Ehrenberg was born. Ehrenberg was one of the most famous and productive scientists of his time. He has been called the founder of micropaleontology (the study of fossil microorganisms). He held that animals, of any size down to the tiniest, have organ systems in common, including muscles, reproductive organs, and stomachs.

At the University of Berlin, Christian Gottfried Ehrenberg was appointed professor of medicine and two years later, In 1829 he accompanied Alexander von Humboldt and Gustav Rose on an expedition through Russia to the Urals and through Siberia to the Altai, where they advanced to the Chinese border. After returning from this expedition, Ehrenberg concentrated on microorganisms that had not yet been systematically researched. Ehrenberg proceeded to examine watersamples, soil, sediment, blowing dust and rock and he described thousands of new species. For instance, he described flagellates such as Euglena, ciliates such as Paramecium aurelia and Paramecium caudatum, and many fossils, in nearly 400 scientific publications.

In particular, Ehrenberg was enthusiastic about a unicellular group of protists called diatoms, but he also studied, and named, many species of radiolaria, foraminifera and dinoflagellates. The studied of Christian Gottfried Ehrenberg highly contributed to today’s knowledge on microorganisms of certain geological formations, especially of the chalk, and of the marine and freshwater accumulations. Further, it was prior to Ehrenberg’s studies not known that considerable masses of rock were composed of minute forms of animals or plants and he further demonstrated that the phosphorescence of the sea was due to microorganisms.

Ehrenberg had also discovered the infusoria in Berlin and noticed that “a large part of the ground on which Berlin stands is made up of these tiny hard-shelled animals”. In the city, many people were worried that the “little animals would even crawl away with the houses” because of structural damage to many houses. Ehrenberg consoled: “they do that so carefully, gentlemen, that you cannot understand why your house is on the Elbe one morning“. He continued his studies on microorganisms in Berlin until his death. Christian Gottfried Ehrenberg died in 1876 and his collections of microscopic organisms were deposited in the Museum für Naturkunde at the University of Berlin. It includes around 40,000 microscope preparations, 5,000 raw samples, 3,000 pencil and ink drawings, and nearly 1,000 letters of correspondence. During his lifetime, Ehrenberg was a member of the Royal Swedish Academy of Sciences, a foreign member of the Royal Society of London, and a Foreign Honorary Member of the American Academy of Arts and Sciences. He further won the Wollaston Medal, the highest award granted by the Geological Society of London as well as the Leeuwenhoek Medal in 1877.