You are here: Home › history › How the Chernobyl Disaster Started

Chernobyl – Sarcophagus of the 4th block in March 2006

On Saturday 26 April 1986, at the No. 4 nuclear reactor in the Chernobyl Nuclear Power Plant, near the city of Pripyat in the north of the Ukrainian SSR, the Chernobyl nuclear disaster started. It is considered the worst nuclear disaster in history and is one of only two nuclear energy disasters rated at seven — the maximum severity — on the International Nuclear Event Scale, the other being the 2011 Fukushima Daiichi nuclear disaster in Japan. I remember the end of April 1986. I was living close to Munich, Germany by that time. Actually enjoying spring in southern Germany with temperatures almost as warm as summer. We were often outside visiting the beautiful Bavarian lakes, playing volleyball, frisbee, and badminton. A little later, when the nuclear disaster had become known, I remember all the controversies about not eating salat, vegetables, milk, or wild mushrooms anymore. People went to the farmers’ markets with Geiger counters. Incredible to think about it today. But now in times of COVID-19, we are visiting the farmers’ markets with face masks. Time to think about what had happened more than 30 years ago.

“There has been an accident at the Chernobyl Nuclear Power Plant. One of the nuclear reactors was damaged. The effects of the accident are being remedied. Assistance has been provided for any affected people. An investigative commission has been set up.”
– Vremya, 28 April 1986 (21:00)

What were the Causes of the Disaster?

The disaster occurred during an experiment conducted under the leadership of Anatoly Stepanovich Djatlov, which was intended to simulate a complete failure of the external power supply of the nuclear reactor. This test was intended to prove that sufficient electrical energy is produced in the plant itself by the after-run of the main turbine to be able to supply the cooling systems still needed in the event of a power failure until the diesel generators start up. The main causes of the disaster are firstly the design characteristics of the graphite-moderated nuclear reactor (type RBMK-1000), which shows unstable behaviour in the low power range, and secondly serious violations of applicable safety regulations by the operators during the test, in particular the operation of the reactor in this unstable power range.

In the case of the accident reactor, the void coefficient was further increased by the advanced burn-up of the nuclear fuel. In addition, the automatic reactor safety system did not monitor compliance with the operational reactivity reserve (minimum reactivity binding required due to control rods sufficiently retracted into the reactor). Instead, it was only specified in the operating regulations. In fact, the specified minimum value of the reactivity reserve had already been undercut hours before the start of the experiment – the reactor should have been shut down. In addition, the operating crew had switched off certain safety systems so that the test could be repeated if necessary. The automatically operating safety systems would otherwise have prevented this as planned by triggering a quick shutdown during the test.

The final triggering of the explosive power excursion is probably due to another special design feature of the control rod system: The majority of the control rods have graphite tips at their lower end, which initially cause a positive reactivity supply (increase in power) amounting to half a β when retracting from the upper end position; they only cause a reduction in power at greater retraction depth. When shift supervisor Alexander Akimov finally ordered Leonid Toptunov to manually trigger the reactor’s emergency shutdown, exactly this effect occurred: Many rods were inserted simultaneously, thus adding even more reactivity to the reactor. This promptly became supercritical, i.e. the chain reaction of nuclear fission ran faster and faster even without delayed neutrons and was therefore no longer controllable. Within fractions of a second, the power increased to many times (probably a hundred times) the nominal power. Large quantities of cooling water evaporated abruptly, and the high pressure that resulted caused the reactor to burst. In addition, chemical reactions of the water vapour with the other reactor components (especially graphite moderator and metal) at the high temperatures produced hydrogen and carbon monoxide, which shortly afterwards mixed with air, leading to a second explosion.

The Immediate Effects and the Sarcophagus

Within the first ten days after the explosion, several trillion becquerels of radioactivity were released into the Earth’s atmosphere. The radioactive substances released into the atmosphere, including the isotopes Caesium 137 with a half-life of about 30 years and Iodine 131 (half-life 8 days), mainly contaminated the region northeast of Chernobyl as a result of radioactive fallout, as well as many countries in Europe as a result of wind transport. After the catastrophe, so-called liquidators began decontaminating the worst affected areas. Under the direction of the Kurchatov Institute, a temporary protective shelter made of reinforced concrete was erected by November 1986, which is usually referred to as a “sarcophagus”. 134 persons, in particular power plant employees and firefighters, were diagnosed with radiation sickness immediately after the event. 28 of them died in 1986 as a result of radiation sickness, most of them in the first months after the reactor accident. Between 1987 and 2004, 19 other helpers affected by radiation sickness died, some of them possibly due to the long-term effects of radiation sickness. 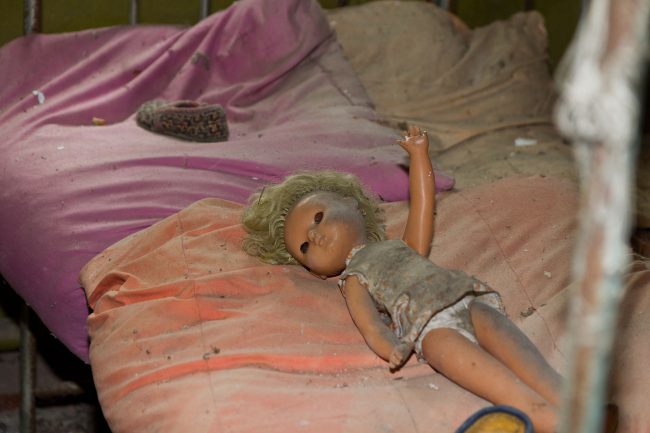 Scene from the village of Kopachi within the “Forbidden Zone”, abandoned due to the 1986 Chernobyl nuclear disaster

“The accident at the Chernobyl nuclear power station was graphic evidence, not only of how obsolete our technology was, but also of the failure of the old system. At the same time, and such is the irony of history, it severely affected our reforms by literally knocking the country off its tracks.”
– Mikhail Gorbachev, Memoirs (1995).

There has been controversy for years about the long-term health effects worldwide, especially those due to an effective dose that is higher than the natural radiation exposure. In a report drawn up jointly with the United Nations and the International Atomic Energy Agency, the WHO considers that a total of about 4000 deaths worldwide are possible, mainly from cancer. According to this report, there have been less than 50 deaths directly attributed to the disaster, mostly as a result of acute radiation sickness. In a 2016 report, the IPPNW statistically links hundreds of thousands of deaths to the nuclear disaster. According to statistical estimates, millions of people are suffering from late effects on their health. The UNSCEAR report published in 2008 concluded that at that time a total of 43 deaths were attributable to the nuclear accident. The scientifically controversial. TORCH report assumes more than 60,000 possible victims. According to a detailed study conducted by UNSCEAR in 2008, the number of deaths that can be clearly attributed to the nuclear disaster is less than one hundred.

One possible explanation for the large difference between the statistically extrapolated number of deaths and the number of deaths empirically proven to date is the Linear No Threshold Model used for the extrapolations, which is highly controversial in nuclear medicine but which states that ionising radiation always causes genetic damage with a mutagenic effect, even at low doses. There are now numerous retrospective studies in which population groups with high annual natural and unnatural radiation exposure have been examined, and the accuracy of the LNT model could not be proven in any of these studies. The most significant effect observed in the heavily contaminated areas around Chernobyl was the increased incidence of thyroid cancer, a form of cancer with a very good prognosis. The increased incidence of thyroid cancer could have been prevented with simple medical means by an iodine blockade by the government of the time.