You are here: Home › history › The Case of the Last Condemned Witch – Anna Göldi

On June 13th 1782, the maidservant Anna Göldi from the tiny Swiss canton Glarus was executed by the sword as being one of the very last women in Europe condemned for witchcraft. Concerning her case also for the very first time the term ‘judicial murder’ has been coined.

Anna Göldi came from a poor background and worked as a maid. She gave birth to two children. The first died shortly after birth. Anna Göldi was then convicted and punished for infanticide. The second child came from her employer Zwicky in Mollis. The child, conceived out of wedlock, was born in Strasbourg and placed in the care of a stranger. Nothing is known about the further fate of this child.

For seventeen years, she worked as a maidservant for Glarus physician, councillor, judge and government councilor Johann Jakob Tschudi. Tschudi came from one of the richest and most influential families in the Protestant canton of Glarus. We know from records of the time that Anna Goeldi was a tall, generously proportioned woman with dark hair, brown eyes, and a rosy complexion. These attributes were not lost on her employer. Here she is said to have put pins into the milk of one of Tschudi’s daughters several times. In addition, according to statements by members of the Tschudi family, the daughter spat nails several times. Anna Göldi was then accused of witchcraft and charged with bewitching Tschudi’s daughter. However, the background for the accusation is more likely to be related to an affair with her employer Tschudi. In addition, Anna Göldi was well acquainted with the Tschudi family’s brother-in-law, Ruedi Steinmüller. He was wealthy and probably got into an inheritance dispute with the Tschudi family. He was also accused and imprisoned as an accomplice. 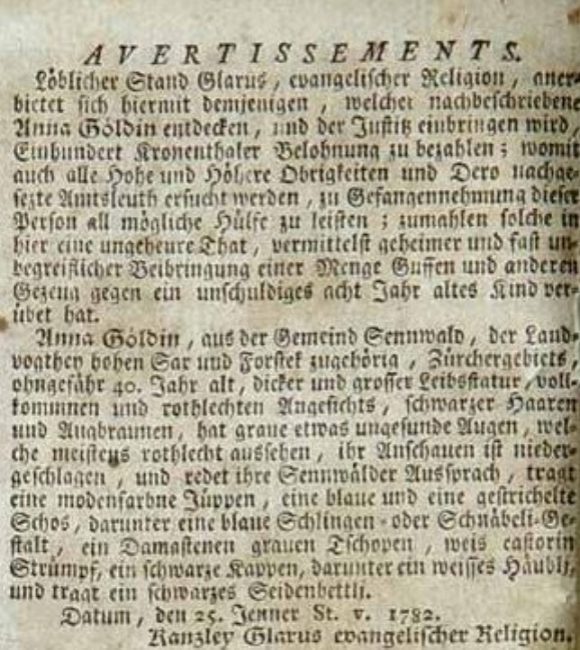 At first, Anna Göldi managed to escape the immanent arrest, but the authorities of the Canton of Glarus advertised a reward for her capture in the Zürcher Zeitung on February 9, 1782. When she was arrested, she admitted unter heavy torture to entering in a pact with the Devil, who had appeared to her as a black dog. Steinmüller was also to make his statement under torture. However, he hanged himself on the night of May 11-12, 1782. His suicide was considered an admission of guilt, and his assets were confiscated.

She withdrew her confession after the torture ended, but the Protestant Council of Glarus sentenced Anna Göldi to death by the sword on June 6, 1782. The sentence was carried out on June 13. Since Anna Göldi was not a citizen of Glarus (Sennwald belonged to the Sax-Forstegg dominion, a bailiwick of Zurich), she was considered a foreigner. Jurisdiction therefore actually lay with a common court, which was composed equally of Catholic and Reformed persons. The judgment was therefore not legal.

Please keep in mind that this did not happen in the dark Middle Ages, but in 1782, at the height of Europe’s so-called Age of Enlightenment. The charges were officially of “poisoning” rather than witchcraft, even though the law at the time did not impose the death penalty for non-lethal poisoning. During her trial, official allegations of witchcraft were avoided, and the court protocols were destroyed. The sentence does therefore not strictly qualify as that of a witch trial. Still, because of the apparent witchhunt that led to the sentence, the execution sparked outrage throughout Switzerland and the Holy Roman Empire.

On September 20, 2007 on the occasion of her 225 anniversary, the Swiss parliament decided to acknowledge Anna Göldi’s case as a miscarriage of justice and called for Anna Göldi’s exoneration, which was granted on August 27, 2008 on the grounds that she had been subjected to an “illegal trial”.