You are here: Home › literature › Embedded in the Collective Consciousness of the West – The Fairy Tales of Hans Christian Andersen 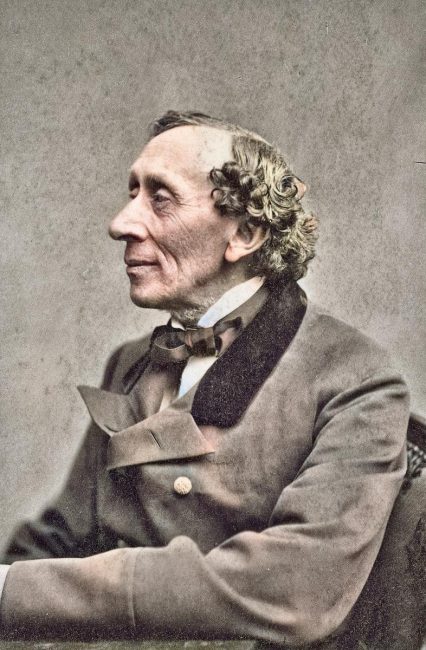 On April 2, 1805, Danish author Hans Christian Andersen was born. Anderson was a prolific writer of plays, travelogues, novels, and poems. However, he is probably best remembered for his fairy tales. Andersen’s popularity is not limited to children: his stories express themes that transcend age and nationality.

“Far out in the ocean, where the water is as blue as the prettiest cornflower, and as clear as crystal, it is very, very deep; so deep, indeed, that no cable could fathom it: many church steeples, piled one upon another, would not reach from the ground beneath to the surface of the water above. There dwell the Sea King and his subjects.”
– Hans Christian Andersen, The Little Mermaid (1835)

A Foster Child and the Theatre

Hans Christian Andersen was born in Odense, Funen, as the son of the impoverished shoemaker Hans Andersen (1782-1816) and the alcoholic washerwoman Anne Marie Andersdatter (ca. 1775-1833). After the death of his father he went to Copenhagen at the age of 14 and tried to come there as an actor to the theater. After he didn’t succeed he tried as a singer in vain and wrote his first little poems. Finally Jonas Collin, the then director of the Copenhagen Royal Theatre, took him into his care and into his house. There he felt particularly attracted to the son of his host parents, Edvard Collin, whom this affection rather alienated and who did not reciprocate. A close friendship connected him with his youngest daughter Louise Collin.

Supported by the theatre management and supported by King Friedrich VI, he was able to attend a Latin school in the small provincial town of Slagelse under the rector Simon Meisling from 1822 to 1826, another Latin school in Helsingør from 1826 to 1828 and then the University of Copenhagen. At the end of his school years he wrote the poem The Dying Child, in which the author described the world from the point of view of a small child. This choice of perspective later became typical of his literary work. The poem was published in several languages. During this time Andersen also wrote his first unpublished fairy tale about the tallow light at the age of about 18, the manuscript of which was not found until 2012. As in later works, this work already deals with wealth and beauty, but in an immature language.

Andersen fell in love with Riborg Voigt, the sister of his student friend Christian Voigt. However, she had already been promised to another man. He kept her suicide note all her life in a small leather bag that was only found after his death. After Riborg’s marriage, Andersen made several trips to Germany, England, Italy, Spain, Portugal and the Ottoman Empire. The first preforms of The Little Mermaid were created under the influence of the Italian landscape. The description of the world in the fairy tale of the same name clearly shows the Italian influences. On his altogether 30 large journeys he came 32 times to Dresden and 15 times to Maxen near Dresden, where he visited his friends, the patrons Friederike and Friedrich Anton Serre. There he also wrote: “The heart’s sunshine in Saxony, he shines most beautifully in Maxen“.

After a visit to Sweden in 1837, Andersen became inspired by Scandinavism and committed himself to writing a poem that would convey the relatedness of Swedes, Danes and Norwegians. In July 1839, during a visit to the island of Funen, Andersen wrote the text of his poem Jeg er en Skandinav (“I am a Scandinavian“) to capture “the beauty of the Nordic spirit, the way the three sister nations have gradually grown together” as part of a Scandinavian national anthem. Composer Otto Lindblad set the poem to music, and the composition was published in January 1840. Its popularity peaked in 1845, after which it was seldom sung. In his later years he was friends with many famous women: Henriette Wulff, daughter of the commander P. F. Wulff, furthermore Sophie Ørsted, daughter of the discoverer of electromagnetism Hans Christian Ørsted, and Jenny Lind, often referred to as “the Swedish nightingale”, whom he adored very much. Andersen, however, remained unmarried for life. There is a controversial debate in science as to whether Andersen was homosexual. This discussion began in the 19th century. More recent investigations have attempted to elaborate on the theme of homoerotic masking in Andersen’s fairytales and novels.

Andersen died at the age of seventy as an internationally recognized and revered poet on August 4, 1875 in Copenhagen, where he was buried at the Copenhagen Assistant Cemetery.

“His own image; no longer a dark, gray bird, ugly and disagreeable to look at, but a graceful and beautiful swan. To be born in a duck’s nest, in a farmyard, is of no consequence to a bird, if it is hatched from a swan’s egg.”
– Hans Christian Andersen, The Ugly Duckling (1835)

Hans Christian Andersen, who always used to abbreviate his name H. C. Andersen as author, became famous for his numerous fairy tales.  1845 saw a breakthrough for Andersen with the publication of four translations of his fairy tales. “The Little Mermaid” appeared in the periodical Bentley’s Miscellany, followed by a second volume, Wonderful Stories for Children. Two other volumes enthusiastically received were A Danish Story Book and Danish Fairy Tales and Legends. A review that appeared in the London journal The Athenæum (February 1846) said of Wonderful Stories, “This is a book full of life and fancy; a book for grandfathers no less than grandchildren, not a word of which will be skipped by those who have it once in hand.” Andersen would continue to write fairy tales and published them in installments until 1872.

Andersen worked on folk tales until they met his literary demands. Based on Danish, German and Greek legends and historical occurrences, connected to popular belief and inspired by literary trends of his time, Andersen created the most significant art fairy tales of the Biedermeier era. Andersen’s fairy tales are not only timeless; they have become part of world literature. However, many of these 156 fairy tales, as well as the autobiographical texts, novellas, dramas, poems and travelogues that testify to his wealth of creativity, are rather unknown.