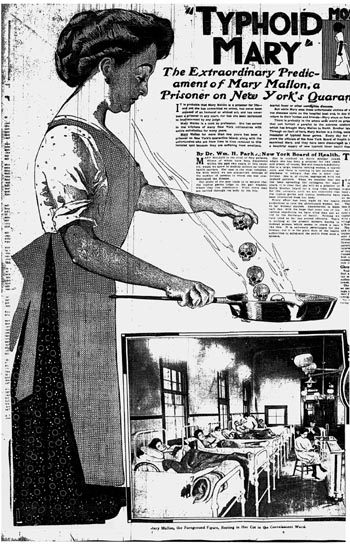 Typhoid Mary in a 1909 newspaper illustration

On September 23, 1869, Mary Mallon was born, better known as Typhoid Mary was born. She was the first person in the United States identified as an asymptomatic carrier of the pathogen associated with typhoid fever. She was presumed to have infected 51 people, three of whom died, over the course of her career as a cook. She was twice forcibly isolated by public health authorities and died after a total of nearly three decades in isolation.

A Chain of Infections

Mary Mallon worked as a cook in the New York City area for several families and many people she worked with became ill after only a while. Some developed typhoid fever, others fever as well as diarrhea. When Mallon worked for a lawyer in the 1900s, seven of eight people in the household became ill and she left to start a position in Oyster Bay, Long Island where also several family members were hospitalized with typhoid.

Identification of the Source

One family hired the typhoid researcher George Soper to further investigate what has been going on and he published his results in June 1907 in the journal of the American Medical Association. As a result of his research, Soper believed that Mary Mallon might be the source of the outbreak: “It was found that the family changed cooks on August 4. This was about three weeks before the typhoid epidemic broke out. She remained in the family only a short time, leaving about three weeks after the outbreak occurred. The cook was described as an Irish woman about 40 years of age, tall, heavy, single. She seemed to be in perfect health.”

During further investigation, the scientist found out that the Irish cook fitting to his description was probably involved in further outbreaks. However, it was hard to locate her since she usually left her position after an outbreak began. When Soper learned of an active outbreak on Park Avenue, he visited the family and approached Mary Mallon about his theory, but the woman refused to give stool and urine samples.

However, after some more time passed, Mary Mallon was taken in police custody and the media gave her the name “typhoid Mary” starting from 1908. During her time in prison, Mallon still did not understand the importance of washing her hands as she believed not to pose a risk. And even though doctors found a significant nidus of typhoid bacteria in her gallbladder, Mary Mallon refused to cease working as a cook. Mallon was held in isolation for three years at a clinic located on North Brother Island, until the New York State Commissioner of Health decided that disease carriers should no longer be kept in isolation. Mallon agreed to give up her job as a cook and apply a certain hygiene in order to be released. Unfortunately, Mallon changed her name to Mary Brown after a while and returned to cooking, causing numerous further typhoid outbreaks.

After Mary Mallon started another major outbreak at a hospital in New York City, she was caught by the police and had to be returned her to quarantine on North Brother Island on March 27, 1915 where she remained confined for the remainder of her life. Six years before her death, she had a stroke. She never completely recovered, and half of her body remained paralyzed. Mary Mallon died on November 11, 1938 of pneumonia at age 69. Mallon’s body was cremated, and her ashes were buried at Saint Raymond’s Cemetery in the Bronx.

At least three deaths were attributed to Mallon but due to her use of aliases and refusal to cooperate, the exact number is not known and estimated at around 50. In August 2013, researchers at the Stanford University School of Medicine announced they were making breakthroughs in understanding the exact science behind asymptomatic carriers such as Mallon. The bacteria that cause typhoid may hide in macrophages, a type of immune cell. Also, the human carrier may be a healthy person who has survived a previous episode of typhoid fever yet who continues to shed the associated bacteria, Salmonella typhi, in feces and urine. Other healthy typhoid carriers identified in the first quarter of the 20th century include Tony Labella, an Italian immigrant, presumed to have caused over 100 cases (with five deaths); an Adirondack guide dubbed “Typhoid John”, presumed to have infected 36 people (with two deaths); and Alphonse Cotils, a restaurateur and bakery owner.