You are here: Home › communication › Tim Berners-Lee and the World Wide Web 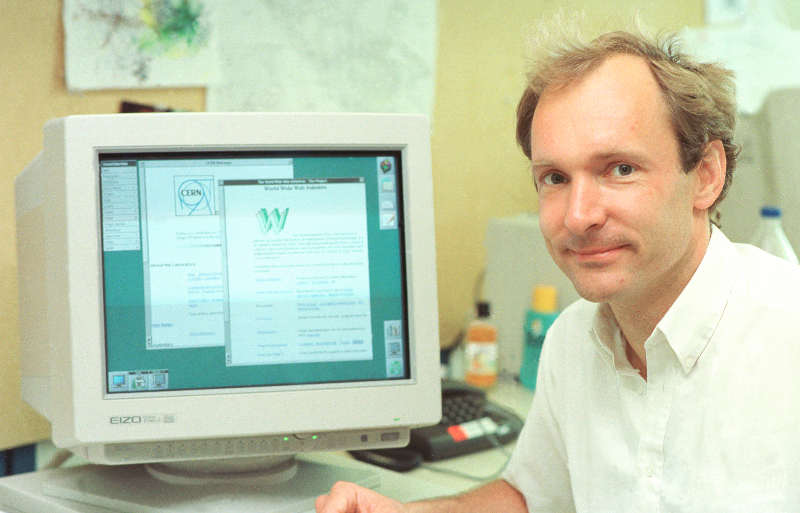 Tim Berners-Lee should know what he is talking about, when he says ‘Celebrity damages private life’. The person who is considered to be the inventor of the World Wide Web was on June 8, 1955.

“I just had to take the hypertext idea and connect it to the TCP and DNS ideas and — ta-da!— the World Wide Web.”
Tim Berners-Lee, Answers for Young People

Joining Hypertext and the Internet

Everything started with the Ferranti Mark 1, the world’s first commercially available computer, which his parents were working on in the late 1940’s and 1950’s. Tim Berners-Lee followed his parents’ footsteps and started studying physics at The Queen’s College about 20 years later. After graduating with a first-class degree, he started working at CERN, where he built ENQUIRE, a hypertext program that was supposed to initiate his later success on the World Wide Web. Later on, he continued working in England and came back to CERN in 1989, where he joined hypertext with the Internet and created the World Wide Web. As a software consultant working for CERN, Berners-Lee wrote a seminal proposal for “a large hypertext database with typed links” to support the document management at CERN, but it generated only little interest [4]. Nevertheless, encouraged by his superior Mike Sendall, Berners-Lee began to implement his system on one of the newly acquired NeXT workstation. Together with his colleague Robert Cailliau he tried to pitch their vision to the European Conference on Hypertext Technology in September 1990, but found no vendors who could appreciate their vision of marrying the hypertext concept with the Internet. However, the World Wide Web was put online on 6 August 1991 for the first time.

From the World Wide Web to the Semantic Web

After this breakthrough, Tim Berners-Lee has been unstoppable. He founded the World Wide Web Consortium (W3C) in 1994 at the Massachusetts Institute of Technology (MIT) and functioned himself as its director. Also Queen Elizabeth II knighted him in 2004 wherefore he is called Sir Tim Berners-Lee from there. In the same year, he accepted a chair at the University of Southampton, where he was to research on the Semantic Web, which was originally initiated by the W3C. It was supposed to be an advance to the original World Wide Web and according to Sir Tim Berners-Lee ‘all the pieces are in place to move full steam ahead and realize the potential of a world of structured, machine readable data.’ In principle, the Semantic Web is an extension of the current Web with explicit semantics represented with the help on ontologies, i.e. information becomes “machine understandable”. 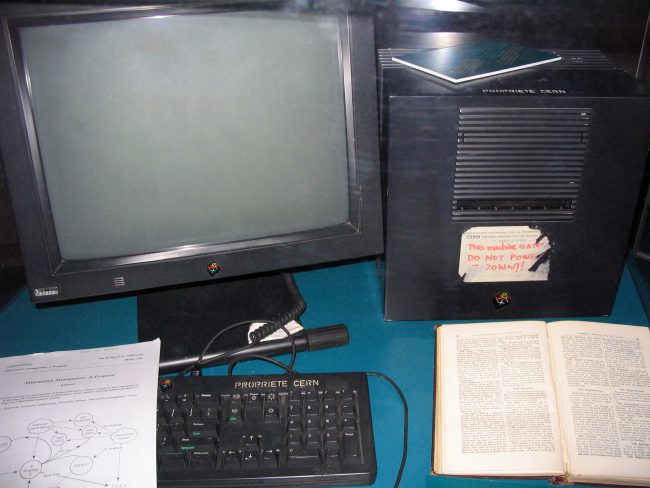 info.cern.ch was the address of the world’s first-ever web site and web server, running on a NeXT computer at CERN. The first web page address was

which centred on information regarding the WWW project. Visitors could learn more about hypertext, technical details for creating their own webpage, and even an explanation on how to search the Web for information. There are no screenshots of this original page and, in any case, changes were made daily to the information available on the page as the WWW project developed. You may find a later copy (1992) on the World Wide Web Consortium website.

This is for Everyone

Through the years, Berners-Lee has been recognized multiple times for his approaches and just this year he has been inducted into the Internet Hall of Fame along with the father of the internet Vint Cerf and Linus Torvalds.[2,3] Named in Time magazine’s list of the 100 Most Important People of the 20th century, Berners-Lee has received a number of other accolades for his invention. He was honoured as the “Inventor of the World Wide Web” during the 2012 Summer Olympics opening ceremony, in which he appeared in person, working with a vintage NeXT Computer at the London Olympic Stadium. He tweeted “This is for everyone“, which instantly was spelled out in LCD lights attached to the chairs of the 80,000 people in the audience. Berners-Lee received the 2016 Turing Award “for inventing the World Wide Web, the first web browser, and the fundamental protocols and algorithms allowing the Web to scale“.

It has been a Privilege

Since 2006 Berners-Lee has been developing the concept of Linked Data. Not only documents should be published and linked in a standardized format, but data of all kinds. Government data, weather data, research data and even personal data are to be put online distributed on many servers in order to be able to search in these data, to jump from link to link and to be able to draw conclusions from ever new combinations. Actually, Linked Data and the Semantic Web are also my personal research focus as a computer scientist. Having been able to meet Sir Tim Berners-Lee in person at one of the many World Wide Web conferences and also at the International Semantic Web Conference has been a privilege.

Berners-Lee is one of the pioneer voices in favour of net neutrality, and has expressed the view that ISPs should supply “connectivity with no strings attached“, and should neither control nor monitor the browsing activities of customers without their expressed consent. He advocates the idea that net neutrality is a kind of human network right:

“Threats to the internet, such as companies or governments that interfere with or snoop on internet traffic, compromise basic human network rights.”

On 30 September 2018, Berners-Lee announced a new application made by open-source startup Inrupt based on the Solid standards, which aims to give users more control over their personal data and lets users choose where the data goes, who’s allowed to see certain elements and which apps are allowed to see that data.

Tim Berners-Lee: The next Web of open, linked data, [7]