You are here: Home › engineering › Robert Whitehead – Changing the Game of Naval Warfare with the Torpedo 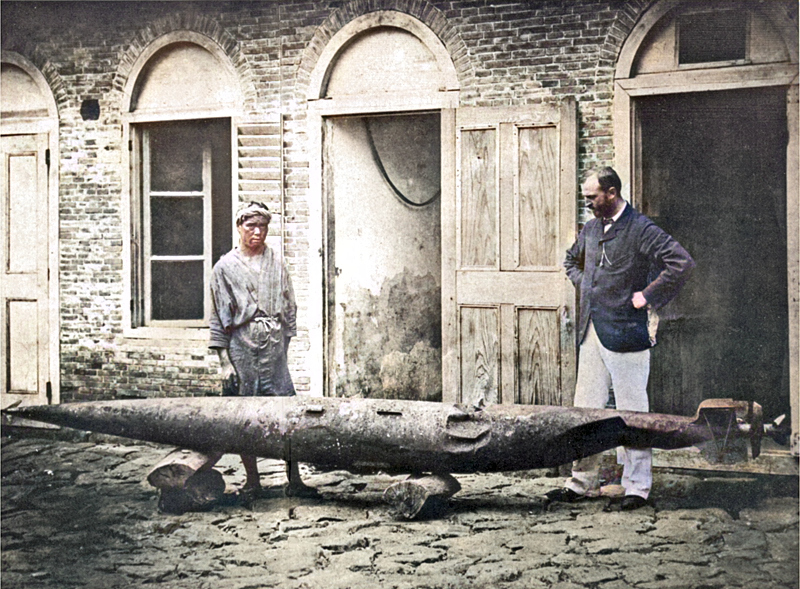 On January 3, 1823, English engineer Robert Whitehead was born. Whitehead is most famous for developing the first effective self-propelled naval torpedo. With this he created a weapon that decisively influenced both world wars.

Robert Whitehead was born in Bolton, England, the son of James Whitehead, a cotton-bleacher, and his wife Ellen Whitehead née Swift. He was trained as an engineer and draughtsman, and attended the Mechanics’ Institute, Manchester and was later employed at a shipyard in Toulon, France, for Philip Taylor & Sons. He then became consultant engineer in Milan, Italy for the construction of textile machines. After moving to Trieste, Whitehead became the manager of a successful metal foundry (Fonderia Metalli) which he renamed Stabilimento Tecnico di Fiume. The company produced modern steam boilers and engines and to its customers belonged the Austrian Navy. Whitehead founded further companies to manufacture steam engines and locomotives in other European countries and became a successful businessman.

The Concept of the Torpedo

The first known concept of a torpedo came from a today unknown officer of the Austrian Marine Artillery. He had the idea of equipping a small boat with explosives, propelling them with the help of steam engines or an air engine, and steering them with cables against enemy ships. One day, the concept got into the hands of Captain Giovanni Luppis. Luppis, who had recently retired to Trieste from the Austrian Navy then produced the first prototypes of a self-propelled torpedo in 1860, which he called the “coast saviour” (Italian: Salvacoste).Captain Luppis built a model of the device, powering it with a spring-driven clockwork mechanism  and steering it remotely by cables from land. However, Luppis was not satisfied with the device and turned to Robert Whitehead.

In about 1850 the Austrian Navy asked Whitehead to develop Luppis’ design into a self-propelled underwater torpedo. The term “torpedo” comes from the Torpedo fish, which is a type of ray that delivers an electric shock to stun its prey. Whitehead’s device was first called Minenschiff (mine ship). It was around 3 metres long with a diameter of 35.5 cm. It was propelled by compressed air and carrying an explosive warhead, with a speed of 13 km/h and the ability to hit a target up to 640 metres away. With an upgrade in 1868, Whitehead further introduced the Pendulum-and-hydrostat control to deal with the stability problem for his torpedo. One year later, the Austrian Navy bought the manufacturing rights to the Whitehead torpedo and he kept innovating the device. Though the product was promising, the torpedo did not produce profits for Stabilimento Tecnico di Fiume, which went bankrupt in 1873. In 1875, Whitehead reorganized the company as Torpedo-Fabrik von Robert Whitehead – later Whitehead & Co., Societa in Azioni. By the 1880s, more of the world’s navies acquired the Whitehead and began deploying torpedo boats to carry them into battle and engineers began to envision submarines armed with Whitehead torpedoes.

In 1890, Whitehead increased the speed of his torpedoes to 30 knots. In 1891 he opened a factory near Portland Harbour, as the British Navy wanted to order his torpedoes in large quantities, but insisted that they be manufactured in Britain.Whitehead fiercely guarded his trade secrets; employees were often sworn to secrecy about the guidance mechanisms employed in his torpedoes. Even though Whitehead was able to make further enhancements, a few problems remained including the issue of course correction, i.e. returning the torpedo to its correct course after it had deviated due to wind or wave action. Ludwig Obry patented a gyroscope gear which was to solve the issue and Whitehead bought the rights in 1896.

Most of the world’s major navies took note of the development of this device by the late 1880s. The first vessel sunk by self-propelled torpedoes was the Turkish steamer Intibah, on 16 January 1878, during the Russo-Turkish War of 1877–78. She was hit by torpedoes launched from torpedo boats operating from the tender Velikiy Knyaz Konstantin under the command of Stepan Osipovich Makarov.

When Whitehead retired, the Whitehead family sold the company to two large British armaments companies, Vickers and Armstrong-Whitworth. Thus the company remained under British control until the First World War. Robert Whitehead died on 14 Nov 1905 in Fiume. By then he had received many awards in several countries for his inventions and achievements, but not in his native England. However, Whitehead’s invention of the torpedo was a key development in naval history.