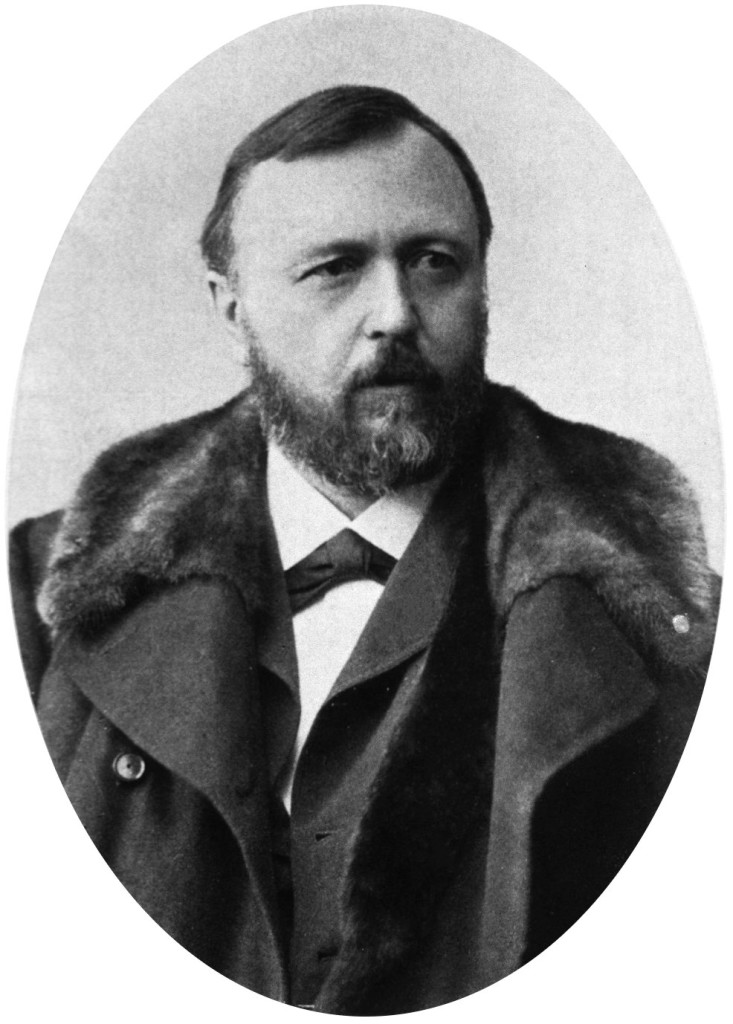 On August 14, 1840, Austro-German psychiatrist Richard von Krafft-Ebing was born. He was recognized as an authority on deviant sexual behavior and its medicolegal aspects. He was the author of the foundational work Psychopathia Sexualis, which contained in its last edition more than 200 case histories out of the hundreds of medical and court reports he had collected. Therein, he also coined the terms sadism and masochism.

Krafft-Ebing was born as the oldest of five children of Friedrich Karl Konrad Christoph von Krafft-Ebing, an aristocratic civil servant living in Mannheim, Baden, Germany. His mother was the daughter of a well-known lawyer. Due to his father’s duties the family moved to Heidelberg, where Richard von Krafft-Ebing graduated from high school and studied medicine at the University of Heidelberg, where he specialized in psychiatry. He graduated with a thesis on „Die Sinnesdelirien“ (sensual deliriums) as a medical doctor in 1863.

Because of this interest, he decided to become a psychiatrist and though he taught as a professor of psychiatry at several different universities, he also worked in psychiatric asylums and was an advocate for the reform of the treatment and diagnosing of the mentally ill.[1] In 1872, he became a professor of psychiatry at the Universities of Strasbourg, but soon relocated to the University of Graz, where, from 1872 to 1880, he served as medical superintendent of the Feldhof mental asylum, which served more as a prison than a hospital. Krafft-Ebing crusaded for reform of this overcrowded facility (without success), and was convinced of the importance of diagnosis, analysis and treatment of mental illness.[2]

He later practiced in psychiatric asylums. After leaving his work in asylums, he pursued a career in psychiatry, forensics, and hypnosis. Krafft-Ebing found that, among the many manifestations of psychopathia, sexual deviance was routinely unexplored and merely dismissed as insanity. He launched a lifelong endeavor to demystify this form of mental illness by approaching the topic objectively and without shrinking from its more distasteful forms.[2]

Krafft-Ebing‘s principal work is Psychopathia Sexualis: eine Klinisch-Forensische Studie (Sexual Psychopathy: A Clinical-Forensic Study), which was first published in 1886 and expanded in subsequent editions. In the years following its publication, Krafft-Ebing continued to interview sufferers of the various psychoses and neuroses, collect records of other noteworthy cases, and engage in correspondence with those who were encouraged to speak freely about their sexual practices. The last edition from the hand of the author (the twelfth) contained a total of 238 case histories of human sexual behaviour.

This book popularized the terms sadism (derived from the brutal sexual practices depicted in the novels of Marquis de Sade)[3] and masochism (derived from the name of Leopold von Sacher-Masoch, whose partially autobiographical novel Venus in Furs tells of the protagonist‘s desire to be whipped and enslaved by a beautiful woman), although these terms apparently were in use prior to its publication. Psychopathia Sexualis is a forensic reference book for psychiatrists, physicians, and judges. “The object of this treatise is merely to record the various psychopathological manifestations of sexual life in man and to reduce them to their lawful conditions,” writes Krafft-Ebing in his introduction to the first edition. His book was aimed at “men engaged in serious study in the domains of natural philosophy and medical jurisprudence.” Krafft-Ebing presented the case histories’ most sordid details in Latin “in order to exclude the lay reader.“[2]

Psychopathia Sexualis was one of the first books about sexual practices that studied homosexuality and bisexuality. It proposed consideration of the mental state of sex criminals in legal judgements of their crimes. During its time, it became the leading medico–legal textual authority on sexual pathology. Krafft-Ebing considered procreation the purpose of sexual desire and that any form of recreational sex was a perversion of the sex drive. “With opportunity for the natural satisfaction of the sexual instinct, every expression of it that does not correspond with the purpose of nature,—i.e., propagation,—must be regarded as perverse.” Hence, he concluded that homosexuals suffered a degree of sexual perversion because homosexual practices could not result in procreation. In some cases, homosexual libido was classified as a moral vice induced by the early practice of masturbation. At that time, male homosexuality had become a criminal offense in Germany and the Austro-Hungarian Empire. After interviewing many homosexuals, both as his private patients and as a forensic expert, Krafft-Ebing reached the conclusion that both male and female homosexuals did not suffer from mental illness or perversion as persistent popular belief held.

Krafft-Ebing’s conclusions about homosexuality are now largely forgotten, partly because Sigmund Freud’s theories were more interesting to physicians.[4] For decades, Krafft-Ebing’s Psychopathia Sexualis was the authority on sexual aberration, and was one of the most influential books on human sexuality. He was both praised and condemned for the book — praised for opening up a new area of psychological study, condemned for immorality and justifying perversion. Besides, Krafft-Ebing also wrote and published several valuable articles on psychiatry.

At yovisto academic video search, Dr. Paul Bloom of Yale University in his 2007 course on ‘Introduction to Psychology’ introduces the students to the theories of Sigmund Freud, including a brief biographical description and his contributions to the field of psychology. The limitations of his theories of psychoanalysis are covered in detail, as well as the ways in which his conception of the unconscious mind still operate in mainstream psychology today.

At the age of only sixty-two, Krafft-Ebing retired to the private clinic in Mariagrün in Graz for health reasons – after celebrating his thirty-year anniversary as a university professor in Vienna – and only six months after his retirement on December 22, 1902, several strokes put an end to his life.