You are here: Home › physics › Pierre Curie – A Pioneer in Radioactivity 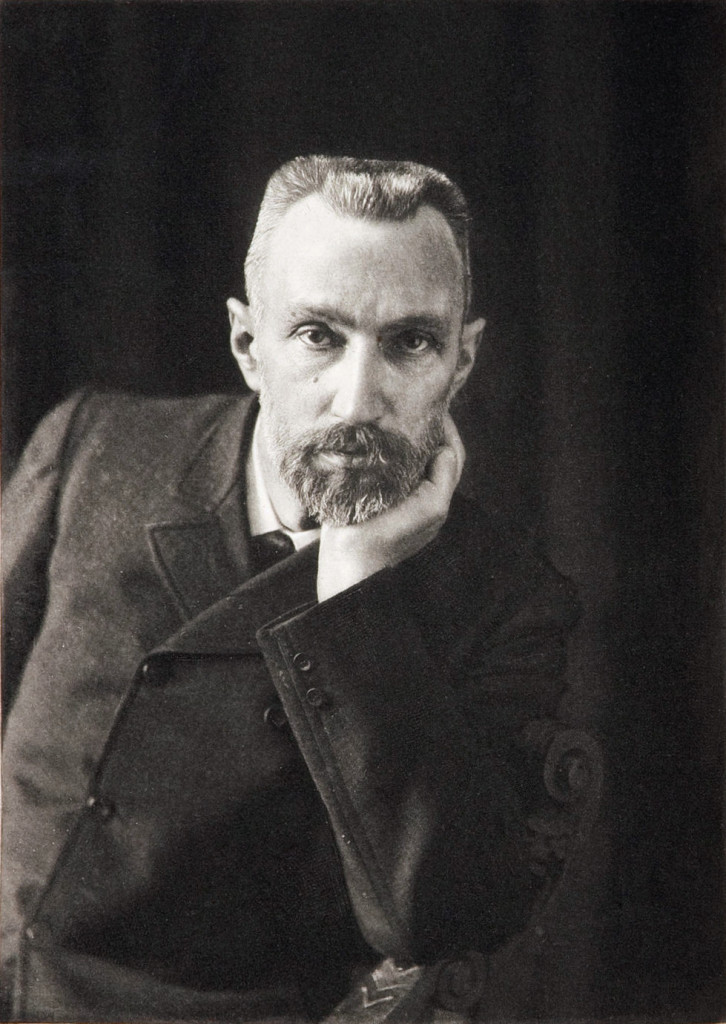 On 19 April 1906, French physicist and Nobel laureate Pierre Curie died in an accident. A pioneer in crystallography, magnetism, piezoelectricity and radioactivity, he co-jointly received the Nobel Prize in Physics in 1903 with his wife, Marie Skłodowska-Curie, and Henri Becquerel, “in recognition of the extraordinary services they have rendered by their joint researches on the radiation phenomena discovered by Professor Henri Becquerel“.[9]

“If one leaves a wooden or cardboard box containing a small glass ampulla with several centigrams of a radium salt in one’s pocket for a few hours, one will feel absolutely nothing. But 15 days afterwards a redness will appear on the epidermis, and then a sore which will be very difficult to heal. A more prolonged action could lead to paralysis and death. Radium must be transported in a thick box of lead.”
– Pierre Curie, Nobel Lecture (1905)

Pierre Curie was born in Paris in 15 May 1859, the son of Eugène Curie, a general medical practitioner, and Sophie-Claire Depouilly Curie. He was educated by his father and already in his early teens showed a strong aptitude for mathematics and geometry. When he was 16, he earned his math degree from the Faculty of Sciences at the Sorbonne. By the age of 18 he gained his Licenciateship in Physics and continued as a demonstrator in the physics laboratory until 1882 when he was placed in charge of all practical work in the Physics and Industrial Chemistry Schools.

In 1880, Pierre and his older brother Jacques, who was laboratory assistant to Charles Friedel at the Sorbonne mineralogy laboratory, were working in crystallography and demonstrated that an electric potential was generated when crystals were compressed, i.e. piezoelectricity. To provide accurate measurements needed for their work, Pierre created a highly sensitive instrument called the Curie Scale. To aid their work, they invented the Piezoelectric Quartz Electrometer. Shortly afterwards, in 1881, they demonstrated the reverse effect: that crystals could be made to deform when subject to an electric field. Almost all digital electronic circuits now rely on this in the form of crystal oscillators.[3]

Working for his doctoral thesis, Pierre Curie studied ferromagnetism, paramagnetism, and diamagnetism. He discovered the effect of temperature on paramagnetism which is now known as Curie’s law. The material constant in Curie’s law is known as the Curie constant. He also discovered that ferromagnetic substances exhibited a critical temperature transition, above which the substances lost their ferromagnetic behavior. This is now known as the Curie point. The Curie Point is used to study plate tectonics, treat hypothermia, measure caffeine, and to understand extraterrestrial magnetic fields. In 1895 Pierre Curie obtained his Doctor of Science degree and was appointed Professor of Physics.

Pierre Curie was introduced to Maria Skłodowska by a friend and took Maria into his laboratory as his student [1]. His admiration for her grew when he realized that she would not inhibit his research. When he first proposed to her she refused, but finally finally agreed to marry him on 26 July 1895.

It was in the time at the end of the 19th century, when a number of discoveries were made in physics which paved the way for the breakthrough of modern physics and led to the revolutionary technical development that is continually changing our daily lives.[2] Heinrich Hertz demonstrated the existence of radio waves in 1886 and in 1895,[10] Guglielmo Marconi succeeded to send and receive the first radio signal over a distance of 1.5km.[11] In 1901, he already span the Atlantic. 1895, Wilhelm Conrad Röntgen discovered a new kind of radiation, which he referred to as X-rays, and which soon was identified as the very high-frequency counterpart of Hertz’s radio waves.[12] The sensation about Röntgen’s X-rays was their ability to pass through opaque material impenetrable for ordinary light. And in 1896, Henri Becquerel by chance discovered the salts of uranium emitted a new kind of radiation that was able to pass through a metal foil and to darken a photographic plate.[9]

Becquerel’s discovery had originally not aroused very much attention. It was Marie Curie who decided to make a systematic investigation of the mysterious “uranium rays”, aided by an electrometer for the measurement of weak electrical currents, which was constructed by Pierre and his brother, and was based on the piezoelectric effect.[2] Just after a few days, she discovered that the strength of the radiation did not depend on the compound that was being studied. It depended only on the amount of uranium or thorium. Marie drew the conclusion that the ability to radiate did not depend on the arrangement of the atoms in a molecule, it must be linked to the interior of the atom itself. This discovery was absolutely revolutionary.[2] Pierre Curie gave up his research into crystals and symmetry in nature which he was deeply involved in and joined Marie in her project. 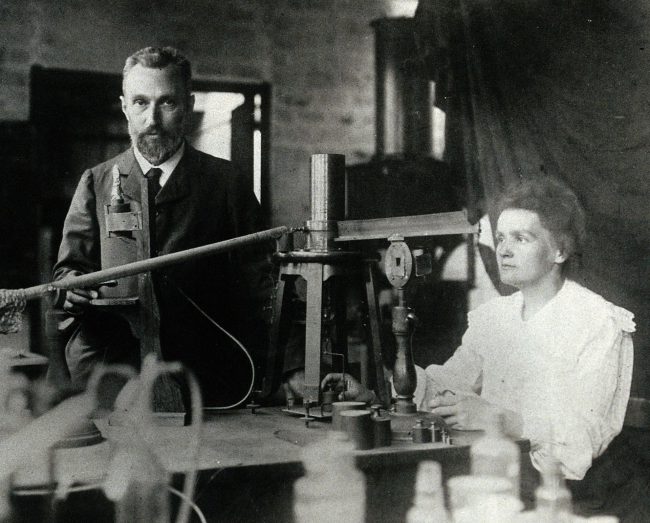 Pierre and Marie Curie in the laboratory, demonstrating the experimental apparatus used to detect the ionsation of air

Pierre and Marie Curie overcame the challenges posed by inadequate lab equipment and heavy teaching schedules to succeed in isolating the elements of radium and polonium in 1898 by fractionation of pitchblende, the specific activity of which is superior to that of pure uranium. Marie Curie actually named the new element polonium after her native country, Poland. While working with Marie to extract pure substances from ores, an undertaking that really required industrial resources but that they achieved in relatively primitive conditions, Pierre himself concentrated on the physical study of the new radiations. Through the action of magnetic fields on the rays given out by the radium, he proved the existence of particles electrically positive, negative, and neutral; these Ernest Rutherford was afterward to call alpha, beta, and gamma rays.[13] Furthermore, he studied these radiations by calorimetry and also observed the physiological effects of radium, thus opening the way to radium therapy.[6]

The Curies went on to describe many of the novel properties of radium, which would form the basis of subsequent research in the fields of nuclear physics and chemistry.[4] Together, Pierre and Marie Curie were awarded half of the Nobel Prize for Physics in 1903 on account of their study into the spontaneous radiation discovered by Becquerel, who was awarded the other half of the prize.[5] Pierre Curie died in a street accident in Paris on 19 April 1906. Crossing the busy Rue Dauphine in the rain at the Quai de Conti, he slipped and fell under a heavy horse-drawn cart. He died instantly when one of the wheels ran over his head, fracturing his skull. Statements made by his father and lab assistant imply that Curie’s characteristic absent-minded preoccupation with his thoughts contributed to his death