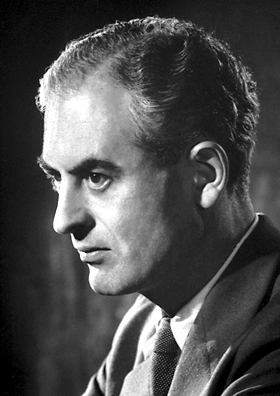 On February 28, 1915, British biologist Sir Peter Brian Medawar was born. His work on graft rejection and the discovery of acquired immune tolerance was fundamental to the practice of tissue and organ transplants. Together with Sir Frank Macfarlane Burnett he shared the 1960 Nobel Prize in Physiology or Medicine “for discovery of acquired immunological tolerance“. For his works in immunology Medwar is regarded as the “father of transplantation“.

Medawar was the younger son of a Lebanese father and a British mother, and was a naturalised British citizen. Actually, he was in Petrópolis (a town 40 miles north of Rio de Janeiro) in Brazil where his parents where taking residence. His father became a naturalised British citizen and worked as an agent for a British dental supplies manufacturer which sent him to Brazil as an agent. With his older brother Phillip, Medawar entered Marlborough College in 1928, which he did not like very much. In 1932 he went on to Magdalen College, Oxford, and completed BA with zoology honours in first-class in 1935. He became senior research fellow of St John’s College, Oxford in 1944, and a university demonstrator in zoology and comparative anatomy, also in 1944. He was elected Fellow of Magdalen by special election during 1938 to 1944 and 1946 to 1947. He did not complete his PhD, as he was unable to spare a completion fee, which he needed more urgently for his appendectomy. Instead Oxford awarded him a DSc in 1947.

The Challenges of Skin Transplantation

In 1947 Peter Medawar was appointed Mason Professor of Zoology at the University of Birmingham. In 1951 he moved to London as Jodrell Professor of Zoology at University College, London. Here he remained until 1962, when he was appointed Director of the National Institute for Medical Research, London.[1] Medawar’s earlier research, done at Oxford, was on tissue culture, the regeneration of peripheral nerves and the mathematical analysis of the changes of shape of organisms that occur during this development. During the early stages of the Second World War he was asked by the Medical Research Council to investigate why it is that skin taken from one human being will not form a permanent graft on the skin of another person, and this work enabled him to establish theorems of transplantation immunity which formed the basis of his further work on this subject.[1] His first publication on the subject was “Sheets of Pure Epidermal Epithelium from Human Skin“, which was published in Nature in 1941.

The Power of Embrionic Cells

His research became more focused in 1949, when Australian virologist Frank Macfarlane Burnet at the Walter and Eliza Hall Institute of Medical Research in Melbourne, who later shared the 1960 Nobel Prize in Physiology or Medicine with Medawar, advanced the hypothesis that during embryonic life and immediately after birth, cells gradually acquire the ability to distinguish between their own tissue substances on the one hand and unwanted cells and foreign material on the other.

With his post doctoral fellow and co-worker Rupert Billingham, he published a seminal paper in 1951. Based on this technique of grafting, his team devised a method to test Burnet’s hypothesis. They extracted cells from young mouse embryos and injected them into another mouse of different strains. When the mouse developed into adult and skin grafting from that of the original strain was performed, there was no tissue rejection. Meaning that the mouse had tolerated the foreign tissue, which would normally be rejected. Their experimental proof of Burnet’s hypothesis was first published in a brief article in Nature in 1953, followed by a series of papers, and a comprehensive description in Philosophical Transactions B in 1956, giving the name “actively acquired tolerance”.

The Basis of Organ Transplant

Peter Medawar was awarded his Nobel Prize in 1960 with Burnet for their work in tissue grafting which is the basis of organ transplants, and their discovery of acquired immunological tolerance. This work was used in dealing with skin grafts required after burns. Medawar’s work resulted in a shift of emphasis in the science of immunology from one that attempts to deal with the fully developed immunity mechanism to one that attempts to alter the immunity mechanism itself, as in the attempt to suppress the body’s rejection of organ transplants. Medawar continued to study transplant immunology throughout his career. He was particularly interested in the nature of the histocompatibility antigens of mice. The limited biochemical techniques available at the time, however, prevented his investigations in this area from being as fruitful as his earlier experiments had been. He had far more success in demonstrating the immunosuppressive properties of and reviving interest in antilymphocyte serum. During his final years in the laboratory, Medawar turned his attention to cancer research, focusing primarily on immunopotentiation as a means of stopping tumor growth.[4]

The Royal Society of London, where he was the Croonian Lecturer in 1958, awarded him the Royal Medal in 1959. In the same year, he was Reith Lecturer for the British Broadcasting Corporation.[1] Influenced by philosopher Thomas Dewar Weldonn, A. J. Ayer, and Karl Popper,[5] Medawar was particularly interested in seeing science as a hypothetico-deductive enterprise that was not restricted to the examination of scientific problems. While experiment and testing were important, Medawar saw the true mark of science, which he famously described as the “art of the soluble,” to be the creative act in which a new idea was generated. Following from Popper, he held that these ideas could never be formally proven true.[2]