You are here: Home › mathematics › Paul Bernays and the Unified Theory of Mathematics 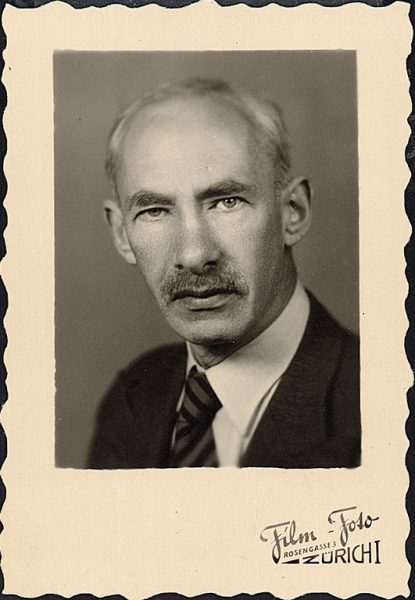 On October 17, 1888, Swiss mathematician and logician Paul Isaac Bernays was born. Bernays made significant contributions to mathematical logic, axiomatic set theory, and the philosophy of mathematics. He was an assistant and close collaborator of David Hilbert.[6] Bernays is known for his attempts to develop a unified theory of mathematics.

“Enlightened humanity has sought in rational deﬁniteness its liberating refuge from the dominating inﬂuence of the merely authoritative. At the present time, however, this has for a large part been lost to consciousness, and to many people scientific validity that has to be acknowledged appears as an oppressing authority.”
— Bernays, Paul. “Comments on Ludwig Wittgenstein’s Remarks on the foundations of mathematics.” Ratio 2.1 (1959): 1-22.

Bernays was born the oldest of five children in London, UK, the son of Julius Bernays, a businessman, and his mother was Sarah Brecher. He spent a happy childhood in Berlin, and attended the Köllner Gymnasium, 1895-1907. Bernays’s decision was to take up engineering and he entered the Technische Hoschule in Charlottenburg where he began his studies in 1907. However, despite his parents’ wish that he put his mathematical talents to practical use, Bernays decided after one semester (the 1907 summer semester) that he must make the change from engineering to pure mathematics.[1] At the University of Berlin, he studied mathematics under Issai Schur, Edmund Landau, Ferdinand Georg Frobenius, and Friedrich Schottky; philosophy under Alois Riehl, Carl Stumpf and Ernst Cassirer; and physics under Max Planck. In 1910 he changed to the University of Göttingen, where he studied mathematics under David Hilbert,[6] Edmund Landau, Hermann Weyl, and Felix Klein; physics under Voigt and Max Born; and philosophy under Leonard Nelson. His very first publication actually was in philosophy, namely Das Moralprinzip bei Sidgwick und bei Kant (1910).[1]

At the University of Zürich, Bernays was appointed as a Privatdozent and an assistant to Ernst Zermelo. He worked there until 1917 but this was not a productive period for him.[1] Starting in 1917, David Hilbert, on the occasion of his lecture in Zürich on “Axiomatisches Denken”, employed Bernays to assist him with his investigations of the foundations of arithmetic. Bernays also lectured on other areas of mathematics at the University of Göttingen. In 1918, that university awarded him a second Habilitation, for a thesis in which he established the completeness of propositional logic; this was in fact a study of Russell and Whitehead’s Principia Mathematica, and uses ideas from Ernst Schröder. This, however, was not published until 1926, and then only in abridged form.

In 1922, Göttingen appointed Bernays extraordinary professor without tenure. His most successful student there was Gerhard Gentzen. In 1933, he was dismissed from this post because of his Jewish ancestry. After working privately for Hilbert for six months, Bernays and his family moved to Switzerland, whose nationality he had inherited from his father, and where the ETH employed him on occasion. He visited Princeton in session 1935-36 and gave courses on mathematical logic and set theory. In 1939 the ETH granted him the right to teach, but only for four years. It was extended in 1943 when the four year term was up. He obtained a half-time permanent post at the ETH from 1945 but there has been criticism of the ETH for not treating a distinguished academic like Bernays in a more honourable way. However Bernays never saw it that way and he was extremely grateful to the ETH for coming to his rescue at a time of great difficulty. He held this part-time post until 1959 when he retired and was made professor emeritus.[1]

Bernays’s collaboration with Hilbert culminated in the two volume work Grundlagen der Mathematik by Hilbert and Bernays (1934, 1939), discussed in Sieg and Ravaglia (2005). In seven papers, published between 1937 and 1954 in the Journal of Symbolic Logic, Bernays set out an axiomatic set theory whose starting point was a related theory John von Neumann had set out in the 1920s.[9] Von Neumann’s theory took the notions of function and argument as primitive; Bernays recast von Neumann’s theory so that classes and sets were primitive. Bernays’s theory, with some modifications by Kurt Gödel,[10] is now known as von Neumann–Bernays–Gödel set theory. A proof from the Grundlagen der Mathematik that a sufficiently strong consistent theory cannot contain its own reference functor is now known as the Hilbert–Bernays paradox. In 1956, Bernays revised Hilbert’s ‘Grundlagen der Geometrie’ (1899) on the foundations of geometry. He believed that the whole structure of mathematics could be combined as a single logical entity.

Bernays never married but after he moved to Zürich he lived with his mother and two unmarried sisters. After his mother died in 1953, he continued to live with his sisters. He remained research active well into his 80s. Paul Bernays passed away on 18 September 1977, aged 88.

What if Current Foundations of Mathematics are Inconsistent? | Vladimir Voevodsky, [11]