You are here: Home › mathematics › Nikolai Lobachevsky – The Copernicus of Geometry 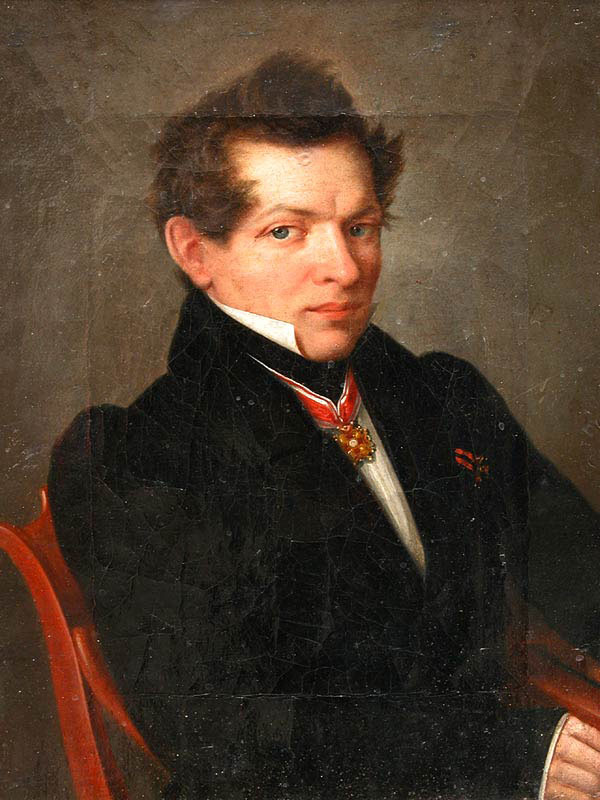 On February 24, 1856, Russian mathematician and geometer Nikolai Ivanovich Lobachevsky passed away. He is known primarily for his work on hyperbolic geometry. Lobachevsky’s main achievement is the development (independently from János Bolyai) of a non-Euclidean geometry, also referred to as Lobachevskian geometry.

Nikolai Lobachevsky was born as one of three children either in or near the city of Nizhny Novgorod in Russia in 1792 to parents of Polish origin. His father Ivan Maksimovich Lobachevsky, a clerk in a land surveying office, died when he was seven, and his mother moved to Kazan. Financed by government scholarships, Lobachevsky attended Kazan Gymnasium from 1802, graduating in 1807 and then received a scholarship to Kazan University, which was founded just three years earlier in 1804. His original intention was to study medicine but he changed to study a broad scientific course involving mathematics and physics.[1]

At Kazan University, Lobachevsky was influenced by professor Johann Christian Martin Bartels, a former school teacher and friend of German mathematician Carl Friedrich Gauss.[5] Bartels was noted for his encyclopedic knowledge of mathematics and soon interested Lobachevsky in mathematics. Lobachevsky received a Master’s degree in physics and mathematics in 1811. In 1814, he became a lecturer at Kazan University, in 1816 he was promoted to associate professor, and in 1822, at the age of 30, he became a full professor, teaching mathematics, physics, and astronomy, the same year in which he began an administrative career as a member of the committee formed to supervise the construction of new university buildings.

He served in many administrative positions and became the rector of Kazan University in 1827, where he stayed until 1846, when he was dismissed due to his deteriorating health. The University of Kazan flourished while Lobachevsky was rector, and this was largely due to his influence. By the early 1850s, he was nearly blind and unable to walk. Nevertheless, Lobachevsky continued his mathematical activity until he died in poverty in 1856.

“There is no branch of mathematics, however abstract, which may not some day be applied to phenomena of the real world.” (Nokolay Ivanovitch Lobachevsky, quoted in George Edward Martin, The Foundations of Geometry and the Non-Euclidean Plane, Springer (1998 [1975]), p. 225)

Lobachevsky’s main achievement is the development (independently from János Bolyai) of a non-Euclidean geometry.[6] Since Euclid’s axiomatic formulation of geometry mathematicians had been trying to prove his fifth postulate as a theorem deduced from the other four axioms.[7] The fifth postulate states that given a line and a point not on the line, a unique line can be drawn through the point parallel to the given line. Lobachevsky did not try to prove this postulate as a theorem. Instead he studied geometry in which the fifth postulate does not necessarily hold. Lobachevsky categorized euclidean as a special case of this more general geometry. This idea was first reported in 1826 to the session of the department of physics and mathematics, and the first publication of this research appeared in 1829–1830 only in a small Kazan periodical as A concise outline of the foundations of geometry[2], which was rejected when it was submitted to the St. Petersburg Academy of Sciences for publication.

Lobachevsky based his geometry on the following assumption: In the plane formed by a line and a point not on the line it is possible to draw infinitely many lines through the point that are parallel to the original line. It was later proved that his geometry was self-consistent and, as a result, that the parallel postulate is independent of Euclid’s other axioms—hence, not derivable as a theorem from them.[3]

In the Poincaré disc model of the hyperbolic plane, lines are represented by circular arcs orthogonal to the boundary of the closure of the disc. The thin black lines meet at a common point and do not intersect the thick blue line, illustrating that in the hyperbolic plane there are infinitely many lines parallel to a given line passing through the same point. (wikipedia)

Lobachevsky called his work “imaginary geometry,” but as a sympathizer with the empirical spirit of Francis Bacon, he attempted to determine the “true” geometry of space by analyzing astronomical data obtained in the measurement of the parallax of stars. A physical interpretation of Lobachevsky’s geometry on a surface of negative curvature was discovered by the Italian mathematician Eugenio Beltrami in 1868. In 1842 Lobachevsky’s work was noticed and highly praised by Gauss, at whose instigation Lobachevsky was elected that year as a corresponding member of the Royal Society of Göttingen.

In addition to his geometry, Lobachevsky obtained interesting results in algebra and analysis, such as the Lobachevsky criterion for convergence of an infinite series (1834–36). His research interests also included the theory of probability, integral calculus, mechanics, astronomy, and meteorology. The real significance of Lobachevsky’s new geometry was not fully understood and appreciated until the work of Bernhard Riemann on the foundations of geometry (1868) and the proof of the consistency of non-Euclidean geometry by Felix Klein in 1871.[3]

At yovisto academic video search, you can learn more about Non-Euclidian geometry in the History of Mathematics lecture of Professor N. J. Wildberger “MathHist12 – Non-Euclidian Geometry“.