You are here: Home › architecture › Neuschwanstein Castle – The Impossible Dream of a Mad King 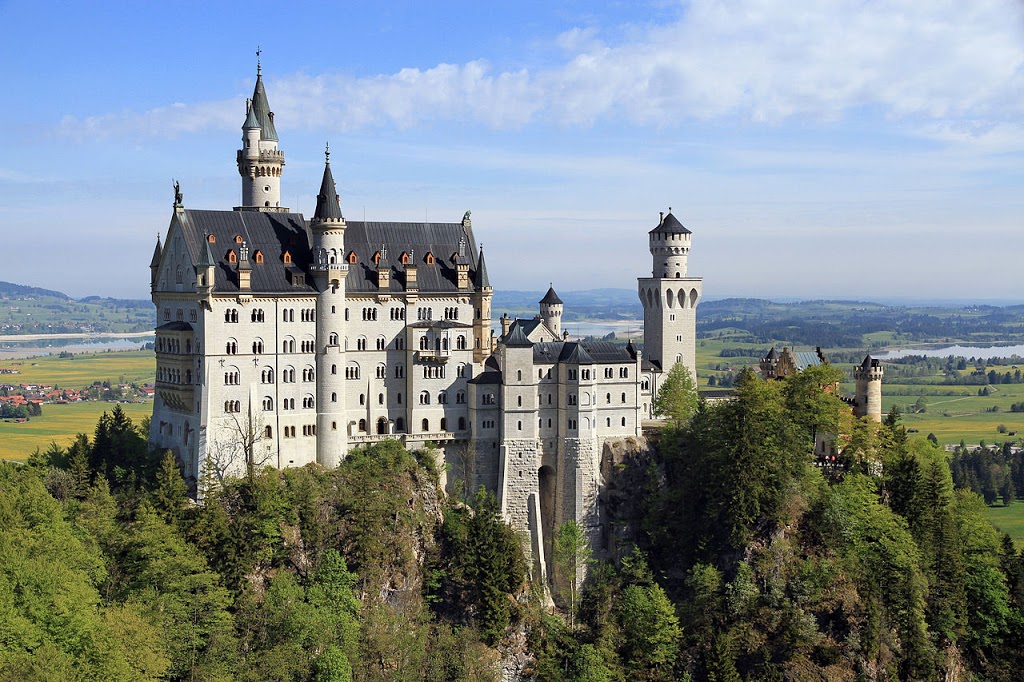 On September 5, 1869, the foundation stone of the most prominent fantasy castle in the world was laid, Neuschwanstein. Commissioned by Ludwig II of Bavaria as a retreat, the 19th-century Romanesque Revival palace is located on a rugged hill above the village of Hohenschwangau near Füssen in southwest Bavaria, Germany, and served as an inspiration for for Disneyland‘s Sleeping Beauty’s Castle‘s Castle.

Big plans of a young King

Intended as a personal refuge for the reclusive king, the fairy-like castle was opened to the paying public immediately after the King Ludwig’s death in 1886. But, let’s take a look on the history and the concept of the high castle. First, the location is pretty well chosen. The municipality of Schwangau lies at an elevation of 800 m at the south west border of the German state of Bavaria. Its surroundings are characterized by the transition between the Alpine foothills in the south and a hilly landscape in the north that appears flat by comparison. Already in the Middle Ages, three castles overlooked the villages of the Schwangau. In 1832, Ludwig’s father King Maximilian II of Bavaria bought the ruins of the olfd Schwanstein castle to replace them with the comfortable neo-Gothic palace known as Hohenschwangau Castle. Finished in 1837, the palace became his family’s summer residence, and his elder son Ludwig spent a large part of his childhood here. The ruins of the other castles located above the family palace were known to the crown prince from his excursions. He first sketched one of them in his diary in 1859 at age 13. When the young king came to power in 1864, the construction of a new palace in place of the two ruined castles became the first in his series of palace building projects. Ludwig called the new palace New Hohenschwangau Castle. Only after his death was it renamed Neuschwanstein. At the same time, crowned heads and noble families throughout Europe built castles and palaces in historical styles or had important medieval monuments reconstructed.

In the 19th century classicism architectural style was superseded by historicism, a mixture – or maybe today we should say a ‘mashup’ – of style elements of preceeding stype epochs, such as e.g. Gothic, Renaissance, Baroque, etc. In its ‘purer forms’, heavily influenced by Romanticism, historicism simply copied the existing style, putting a ‘neo-‘ in front. Therefore, we also refer to Neuschwanstein as a neo-Gothic castle. Well, in the end the palace was primarily built in Romanesque style, while originally planned as neo-Gothic. In the 19th century, many castles were constructed or reconstructed, often with significant changes to make them more picturesque. One of the most prominent examples is the reconstructed Wartburg near Eisenach, where Martin Luther spent hidden in exile, translating the Latin Bible into German.[6] King Ludwig II of Bavaria saw this building also as a representative of a romantic interpretation of the Middle Ages as well as the musical mythology of his friend, the composer Richard Wagner. [5] Wagner’s operas Tannhäuser as well as Lohengrin had made a lasting impression on the King, especially as Tannhäuser is set in scenenon the historic Wartburg. 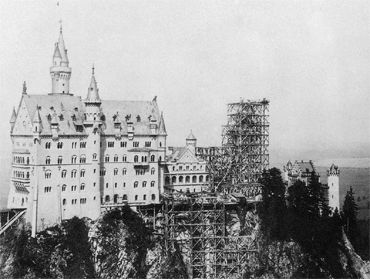 Neuschwanstein in 1886, the year of King Ludwig‘s death

200 craftsmen and one micro manager

The building design of the new castle was drafted by the stage designer Christian Jank and realized by the architect Eduard Riedel. For technical reasons the remainders of the ruined castles could not be integrated into the plan. The king insisted on a detailed plan and on personal approval of each and every draft. Ludwig’s control went so far that the palace has been regarded as his own creation, rather than that of the architects involved. The foundation stone for the palace was laid on September 5, 1869. The palace was erected as a conventional brick construction and later encased in various types of rock. For about two decades the construction site was the principal employer in the region. In 1880, about 200 craftsmen were occupied at the site, not counting suppliers and other persons indirectly involved in the construction. In 1884, the king was able to move into the (still unfinished) Palais, the real main and residential building of the castle. Planned as a temple of friendship the castle was also dedicated to the life and work of Richard Wagner, who died in 1883 before he had the chance to set foot in the building. 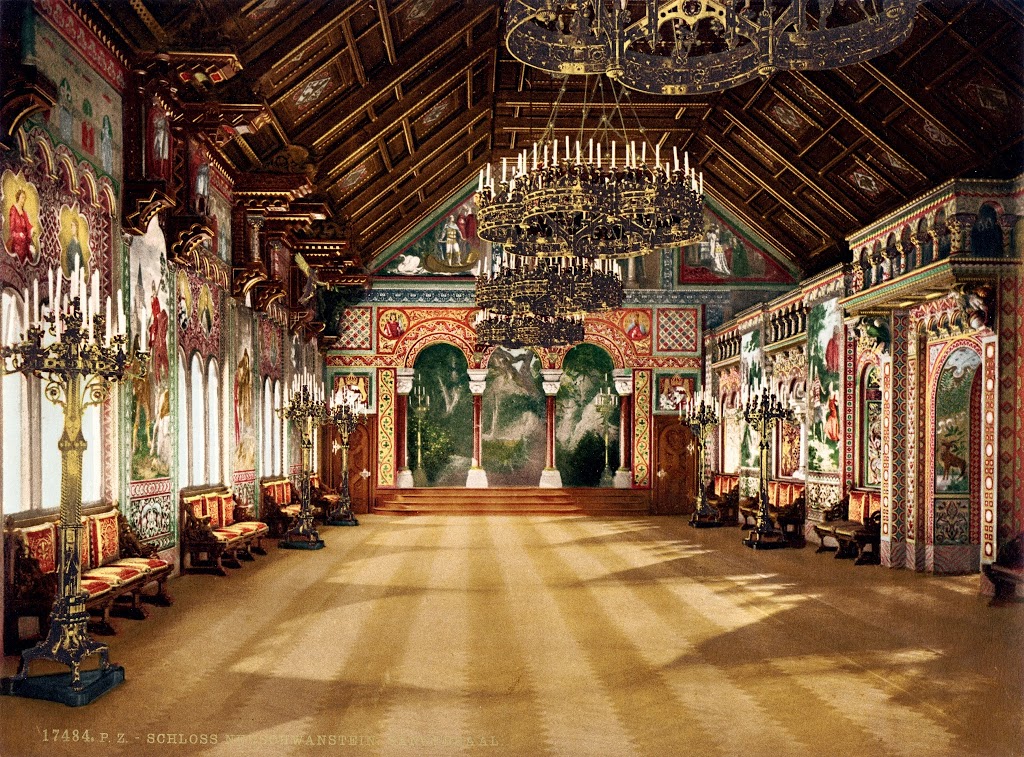 Had it been completed, the palace would have had more than 200 interior rooms, including premises for guests and servants, as well as for service and logistics. Ultimately, no more than about 15 rooms and halls were finished. The largest room of the palace by area is the Hall of the Singers, followed by the Throne Hall. It is designed as an amalgamation of two rooms of the Wartburg: The Hall of the Singers and the Ballroom. It was one of the king’s favorite projects for his palace, decorated with themes from Lohengrin and Parsival.[8] At the time of Ludwig’s death in 1886 – the king died under mysterious circumstances at age only 41 – the palace was far from complete. The king never intended to make the palace accessible to the public. But no more than six weeks after the king’s death the regent Luitpold ordered the palace opened to paying visitors. Today, with 1.3 million visitors per year Neuschwanstein has become one of the most popular tourist destinations in Europe. Whereas contemporary architecture critics derided Neuschwanstein, one of the last big palace building projects of the 19th century, as pure kitsch, Neuschwanstein as well as Ludwig II’s other buildings today are counted among the major works of European historicism.

At yovisto academic video search you can learn more about Richard Wagner, the most favourite artist of King Ludwig II of Bavaria. Based on his romantic musical works, Ludwig had designed large parts of the interior of his dream castle Neuschwanstein. Prof. Eero Tarasti from University of Helsinki is giving a lecture on Richard Wagner in his lecture series ‘Music History: Styles and Periods”.