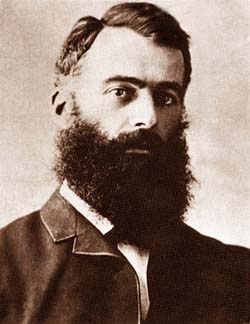 On January 29, 1850, Australian engineer, explorer, astronomer, inventor and aeronautical pioneer Lawrence Hargrave was born. Hargrave “flew” on 12 Nov 1894, by attaching himself to a huge kite construction connected to the ground by piano wire. Due to their abilities to carry heavy payloads, steady flight, and capacity for high altitude flight, these kites have had many industrial and military uses.

“I am using kites, and find perfect stability can be got by making them of three dimensions instead of two … cellular kites do not confine their surface to one plane, but distribute it in various portions, forming cells through which the wind blows.”
– Lawrence Hargrave, [7]

Hargrave was born in Greenwich, England, the second son of John Fletcher Hargrave and was educated at Queen Elizabeth’s Grammar School, Kirkby Lonsdale, Westmorland. He immigrated to Australia with his family, arriving in Sydney in 1865 on the La Hogue. Destined for the law, he was put to a tutor, but when he was offered a trip on the schooner Ellesmere to the Gulf of Carpentaria, his father consented, and Hargrave circumnavigated Australia.[1] Although he had shown ability in mathematics at his English school he failed the matriculation examination and in 1867 took an engineering apprenticeship with the Australasian Steam Navigation Company in Sydney, where he worked for five years, learning design and other practical skills. He later found the experience of great use in constructing his models.

In 1872, as an engineer, he sailed on the Maria on a voyage to New Guinea but the ship was wrecked. In 1875 he again sailed as an engineer on William John Macleay‘s expedition to the Gulf of Papua. From October 1875 to January 1876 he was exploring the hinterland of Port Moresby under Octavius Stone, and in April 1876 went on another expedition under Luigi D’Albertis up the Fly River on the SS Ellengowan. In 1877 he was inspecting the newly developing pearling industry for Parbury Lamb and Co. He returned to Sydney, joined the Royal Society of New South Wales in 1877, and in 1878 became an assistant astronomical observer at Sydney Observatory. He observed the transit of Mercury in 1881, made observations of the Krakatoa explosion which led him to a theory linking it with the brilliant sunsets seen at the time.[1] He held this position for about five years, retired in 1883 with a moderate competency, and gave the rest of his life to research work.

His observation of waves and of the motion of fish, snakes and birds had led Hargrave to consider flight. His theoretical approach was based on the necessity to ‘follow in the footsteps of nature’. He expounded the theory in a long paper, ‘Trochoided plane‘, to the local Royal Society on 6 August 1884, the first of a series of reports on experiments in the construction of machines for flying that he carried out.[1] He chose to live and experiment with his flying machines in Stanwell Park, a place which offers excellent wind and hang conditions and nowadays is the most famous hang gliding and paragliding venue in Australia. One of Hargrave’s earliest achievements was to demonstrate that for a wing to lift and move through air efficiently, the center of pressure ought to be located at about 25% of the chord length of the wing section. This was an understanding of great significance and to ensure that it would find application by any aerial experimenters so interested, Hargrave published his discovery.[2] 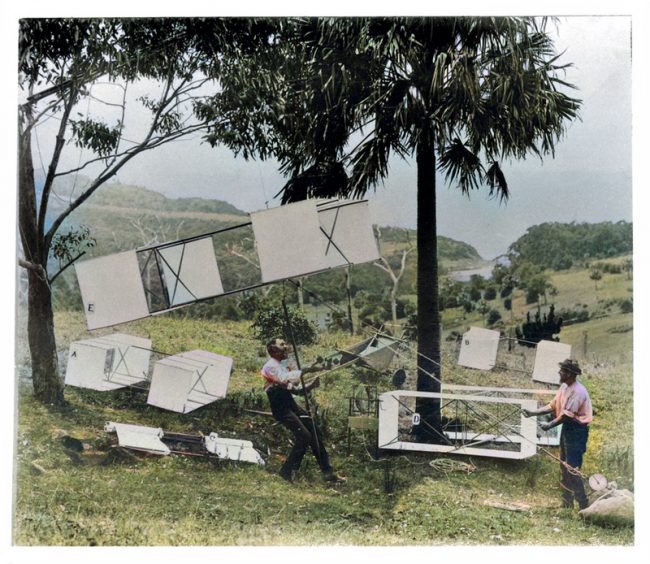 In his career, Hargrave invented many devices, but never applied for a patent on any of them. He needed the money but he was a passionate believer in scientific communication as a key to furthering progress. He made endless experiments and numerous models, and communicated his conclusions in a series of papers to the Royal Society of New South Wales, which reported on his experiments with flying-machine motors and cellular kites. Of great significance to those pioneers working toward powered flight, Hargrave successfully lifted himself off the ground under a train of four of his box kites at Stanwell Park Beach on 12 November 1894. Aided by James Swain, the caretaker at his property, the kite line was moored via a spring balance to two sandbags. Hargrave carried an anemometer and clinometer aloft to measure windspeed and the angle of the kite line.

A modification was adopted by the weather bureau of the United States and the use of box-kites for meteorological observations became widespread. The principle was applied to gliders, and in October 1906 Alberto Santos-Dumont [9] used the box-kite principle in his aeroplane to make his first flight. When Gabriel Voisin [10] built the first commercially available aircraft, based on the stable lifting surfaces of Hargrave’s box kites, he called them “Hargraves.”[3] In 1889 Hargrave invented a rotary engine which appears to have attracted so little notice that its principle had to be discovered over again by the Seguin brothers in 1908. His development of the rotary engine was frustrated by the weight of materials and quality of machining available at the time, and he was unable to get sufficient power from his engines to build an independent flying machine.

The only museum that would meet Hargrave’s terms for the exhibit of his model was the Deutsche Museum in Munich [4]. It is ironic that most of Hargrave’s 176 working models were destroyed in the Allied aerial bombardment of Germany during World War II. The 25 surviving models were restored in the 1960s to Sydney, Australia’s Powerhouse Museum, which is staging an exhibition to mark the centennial of Hargrave’s first flight. Hargrave’s interest in aeronautical experimentation continued throughout his life. His later research included investigations into ways the curvature of wings could increase lift. His designs strongly influenced early human flight and he is recognized today as one of the great pioneers of aeronautics.[7]

After an appendectomy, Lawrence Hargrave died of peritonitis in July 1915 at age 65.

Finally, kites have grown up: Roland Schmehl at TEDxDelft, [11]