You are here: Home › physics › The Kyshtym Disaster 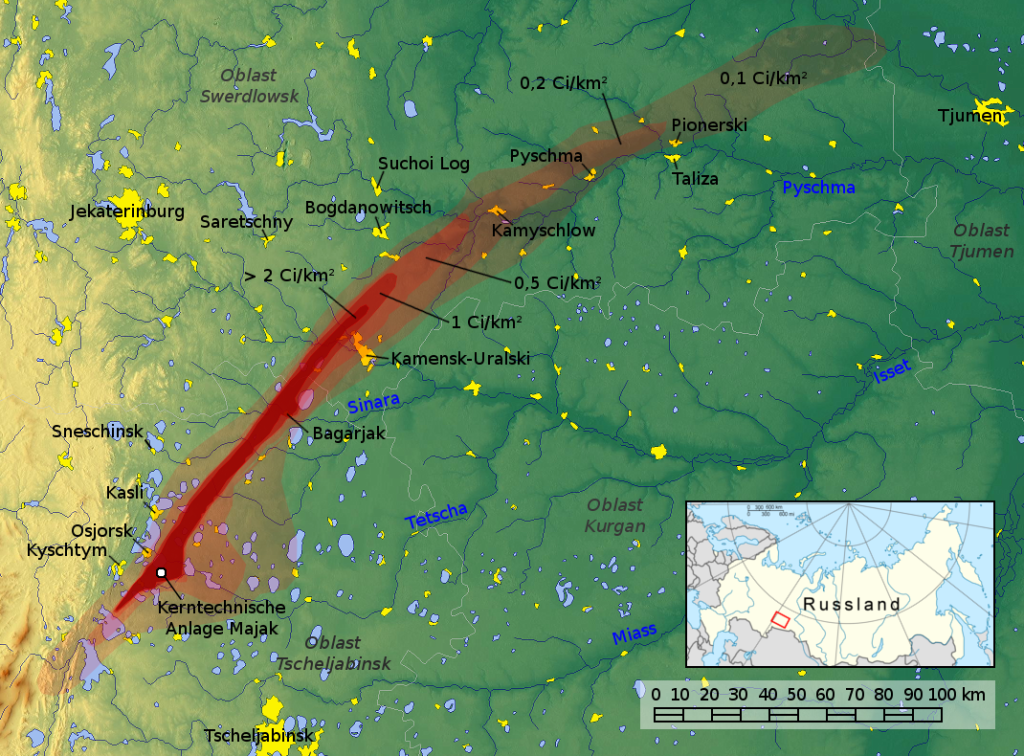 On September 29, 1957, near the Russian town of Kyshtym a major radiological contamination accident happened, which is referred to as the Kyshtym disaster. The failure of the cooling system for a tank storing tens of thousands of tons of dissolved nuclear waste resulted in a chemical (non-nuclear) explosion having an energy estimated at about 75 tons of TNT. The Soviet Union did not release news of the accident and denied it happened for close to thirty years. The Kyshtym disaster was the third most serious nuclear accident ever recorded, behind the Fukushima Daiichi nuclear disaster and the Chernobyl disaster.

Mayak, the plutonium production site for nuclear weapons and nuclear fuel reprocessing plant was established in 1946. The first nuclear bomb was probably produced there by 1949 and Moscow then started to demand more bombs. As everything had to go fast, Mayak proceeded to deliver in less time, which certainly took its toll. It is assumed that basic safety standards were disregarded in order to produce faster and it is also believed that around 17,245 workers received radiation overdoses between 1948 and 1958. Further, radioactive waste was probably dumped into the nearby river which caused breakouts of radiation sickness in several villages near the river.

Then, on September 29, 1957, the cooling system of a cistern with radioactive waste failed without anybody noticing. As a result, the waste started to heat up immensely, eventually exploding at a temperature of approximately 350°C. The waste was covered with 160-ton concrete, which burst and catapulted 20 million curies of radioactive material around. As most of the contamination settled out near the site of the accident which contributed to the pollution of the Techa River, a plume containing 2 MCi of radionuclides spread out over hundreds of kilometers. Within a few hours, the radioactive cloud moved towards the north-east, reaching 300–350 kilometers from the accident, which caused a long-term contamination of an area of more than 800 to 20,000 square kilometers. Later on, the area has been referred to as the East-Ural Radioactive Trace.

At least 22 villages exposed to radiation from the disaster, with a total population of around 10,000, were evacuated. Some were evacuated after a week but it took almost 2 years for evacuations to occur at further sites. Due to the secrecy surrounding Mayak, the populations of affected areas were apparently not initially informed of the accident, wherefore evacuation did not immediately take place. Only in 1976, Zhores Medvedev made the nature and extent of the disaster known to the world. Since there were no verifiable information, many different accounts of the disaster were given. Medvedev’s description of the disaster in the New Scientist was initially derided by western nuclear industry sources, but the core of his story was soon confirmed by Professor Leo Tumerman, former head of the Biophysics Laboratory at the Institute of Molecular Biology in Moscow. However, the exact number of fatalities remains uncertain even though the most commonly quoted estimate is 200 deaths due to cancer, but the origin of this number is not clear. To reduce the spread of radioactive contamination after the accident, contaminated soil was excavated and stockpiled in fenced enclosures that were called “graveyards of the earth”. The Soviet government disguised the contaminated area by creating the East-Ural Nature Reserve, which prohibited any unauthorised access to the affected area.

According to the INES scale, the 1957 accident represents an event of the second highest category 6. According to the Helmholtz Center in Munich, the effects of the accident were underestimated for a long time. According to more recent estimates, the accident would have to be rated INES 7, making it the first accident of the highest level even before the Chernobyl disaster. In contrast to the Chernobyl disaster, the material was distributed locally to regionally. The violent graphite fire at Chernobyl carried a large part of the radionuclides high up into the atmosphere, while at Mayak a cloud formed close to the ground due to lower thermals. The high concentration of radioactivity, lack of public education, failure to evacuate the entire area, and inadequate decontamination led to high levels of damage in the affected region. An exact number of victims cannot be given because no reliable studies and investigations are available. A comparative calculation based on the radioactive contamination stated by the authorities comes to about 1000 additional cancer cases due to the accident. That is about 10 percent of the population living in the sparsely populated near region at that time.