You are here: Home › physics › Konrad Lorenz and the Study of Instinctive Behavior of Animals 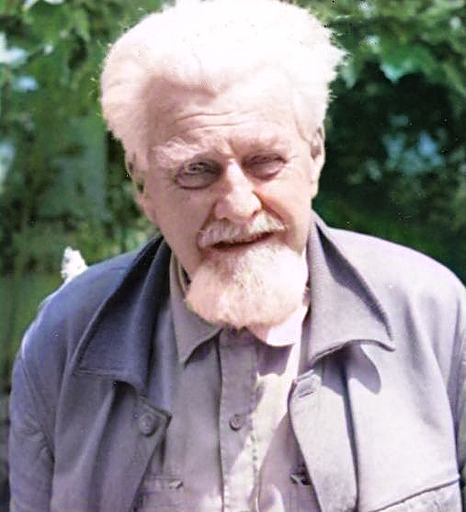 On November 7, 1903, Austrian zoologist, ethologist, and ornithologist Konrad Lorenz was born. Lorenz is regarded as one of the main representatives of classical comparative behavioral research (ethology). He himself called this field of research “animal psychology” until 1949.

“The competition between human beings destroys with cold and diabolic brutality…. Under the pressure of this competitive fury we have not only forgotten what is useful to humanity as a whole, but even that which is good and advantageous to the individual….”
— Konrad Lorenz, Civilized Man’s Eight Deadly Sins (1973)

Konrad Lorenz was the second, very late born son of the respected orthopedist Adolf Lorenz. Adolf Lorenz was almost fifty when his son was born; his mother Emma Maria (née Lecher) was already forty-one. At the beginning of the 20th century his father was a world-famous physician who practiced not only in Vienna but also regularly in New York for many decades and was received by Theodore Roosevelt in the White House, among other places.

Konrad Lorenz grew up in his parents’ villa in Altenberg near Vienna. From 1909 he attended elementary school and from 1915 the Schottengymnasium in Vienna, where he graduated with distinction in 1921. He was a childhood friend of Karl Popper.[1]  In 1922 Konrad Lorenz began studying medicine at the Premedical School of Columbia University in New York at his father’s request. However, he returned to Austria in 1923 and continued his medical studies at the University of Vienna until 1928. 1928 followed, also in Vienna, his doctorate in medicine (Dr. med. univ.). In the same year and – after an interruption – from 1931 to 1935, he was employed as an assistant to Ferdinand Hochstetter at the Second Anatomical Institute of the University of Vienna, which was a magnet for German-national and nationalistic students. Hochstetter made it possible for Lorenz to pursue his ethological research at the same time. However, Hochstetter’s successor then prohibited him from doing ethological research, which is why Lorenz gave up his assistant position and pursued his interests as a private scholar in Altenberg, where he had set up a private zoological research station in 1928 without a salary.

From Medical Science to Zoology

Konrad Lorenz first met the ornithologists Oskar Heinroth and Erwin Stresemann in Berlin in 1931 – a decisive event for his entire subsequent scientific career. In 1933 he was awarded his second doctorate in Vienna, this time as Dr. phil. in zoology. In 1936 Lorenz was habilitated, so that from 1937 he could be granted the teaching license for “Zoology with special consideration of comparative anatomy and animal psychology” at the University of Vienna; this was the first academic teaching license of its kind in Austria.

In 1937, due to the rejection of his ethological research by the majority of Viennese professors, Konrad Lorenz applied abroad – to the Notgemeinschaft der deutschen Wissenschaft, the predecessor of the Deutsche Forschungsgemeinschaft (DFG, German Research Foundation) – for funding for his studies on congenital movements in duck birds. However, this application was rejected despite an excellent positive report. The reason for the rejection was that “above all the political convictions and the ancestry of Dr. Konrad Lorenz were questioned“. At the second attempt, Lorenz’s application for a research grant was successful. From 1938 he worked on disturbances of instinct behavior by domestication on wild geese and crosses of wild goose and house goose. In the following years – until 1944 – Lorenz increasingly transferred his findings on domestication-induced changes in animal behaviour to humans.

In 1940 Konrad Lorenz was appointed Professor of Comparative Psychology at the Department of Psychology of the Faculty of Philosophy at Königsberg University. The teaching activity of Konrad Lorenz in Königsberg ended only one year after its beginning, because in October 1941 he was drafted as a soldier to the Wehrmacht. After a short basic training he was transferred from 1941 to 1944 as an army psychologist and from 1942 as a military doctor to a military hospital in Poznan in German-occupied Poland. In April 1944 Konrad Lorenz was transferred to a German combat unit in the Soviet Union, where he was taken prisoner of war by the Soviets shortly thereafter, from where he was released to Austria in 1948 and returned to Altenberg in Lower Austria.

The Institute for Comparative Behavioral Research

There, near a branch of the Danube, he founded an “Institute for Comparative Behavioral Research” in 1949, which belonged to the Austrian Academy of Sciences. Also in 1949 he published his book Er redete mit dem Vieh, den Vögeln und den Fischen (He Talked to the Cattle, the Birds and the Fish), which is still popular today, in order to finance his livelihood and research. This book was shortlisted as the “best popular science book of all time” by the Royal Institution of Great Britain in 2006. He was not awarded a professorship in Graz in 1950, which Karl von Frisch, among others, advocated; this was partly due to his past under National Socialism, partly to the still great reservations in Austria about a biologist who regarded the behavior of humans and animals primarily as innate, i.e. from the perspective of evolutionary theory.

Instead, in 1950 the German Max Planck Society in Buldern/Westphalia set up a “Research Centre for Comparative Behavioral Research” especially for Konrad Lorenz, as a branch of the Max Planck Institute for Marine Biology in Wilhelmshaven, among other things to counter poaching attempts from Oxford. Nikolaas Tinbergen accepted a teaching position there in 1949 and immediately contacted Lorenz again. In 1953 Konrad Lorenz was appointed honorary professor at the University of Münster. In 1955, the Max Planck Society began building the Max Planck Institute for Behavioral Physiology at Lake Eßsee in Upper Bavaria. There Lorenz became deputy director under Erich von Holst and after his early death in 1961 and until 1973 director. In 1957 he was appointed honorary professor for zoology at the University of Munich.

In 1963 his bestseller Das sogenannte Böse. Zur Naturgeschichte der Aggression (The so-called Evil, On the natural history of aggression) was published. Ten years later in 1973, he published two further bestsellers: Die acht Todsünden der zivilisierten Menschheit (The Eight Deadly Sins of Civilized Humanity) and the main philosophical work Die Rückseite des Spiegels. Versuch einer Naturgeschichte des menschlichen Erkennens (The Back of the Mirror. Attempt at a natural history of human cognition). In 1973, together with Karl von Frisch and Nikolaas Tinbergen, he was awarded the “Nobel Prize for Physiology or Medicine” for discoveries on the organization and triggering of individual and social behavior patterns.

From the 1960s onwards, Lorenz became interested in environmental issues, triggered by Rachel Carson‘s book The Silent Spring (1962). In 1978, immediately before his 75th birthday, Lorenz became the figurehead of the successful Austrian referendum against the commissioning of the Zwentendorf nuclear power plant. In 1985 he also gave his name to the Konrad-Lorenz referendum (see list) against the construction of a hydroelectric power plant in the Hainburger Auen landscape conservation area. In 1988, his last major work was published: “Hier bin ich – wo bist du?” (“Here I am – where are you”), an exact ethological description of greylag geese as a synopsis of around 60 years of intensive observation of behaviour. Konrad Lorenz died on January 27, 1989.

Konrad Lorenz is regarded today as one of the co-founders of the biology of behavior and as its most important pre-war theorist. Lorenz’s 1935 epoch-making essay Der Kumpan in der Umwelt des Vogels, published in the Journal für Ornithologie, proved to be groundbreaking for behavioral biology research in German-speaking countries. The term comparative behavior research indicates that this research approach regards the behavior of animals as hereditary in a similar way as comparative anatomy regards the body structure of animals. Konrad Lorenz relied less on experiments and more on precise observation and description of the behavior of animals in their natural environment.

The exact description of all observable behaviors in ethograms and the exact recording of their frequencies and sequences made it possible to compare behaviors between differently closely related species. Thus Lorenz was able – especially in duck and geese species – to “explain” certain behaviors of one species as modifications of behaviors of another species – very similar to the comparative anatomy, which often can only understand their origin in the course of the phylogeny of these species by comparing certain physical characteristics of related species. In the field of behavioral research, this approach is the only way to understand the evolution of behavior, since there is a lack of fossil evidence.

But Lorenz’s scientific importance is at least equally rooted in the fact that he made a major contribution to establishing behavioral biology (he himself often referred to it as “animal psychology” until 1949) as an independent field of research at German universities and to raising public awareness of this field. Many interpretations of animal behavior published by Konrad Lorenz do not stand up to today’s scientific criteria, and his instinct theory is no longer used by behavioral researchers as a working hypothesis. As early as the mid-1970s, more and more researchers abandoned Lorenz’s instinct theory and turned increasingly to behavioral ecology and neurobiology. Lorenz’s life-long defense of the evolutionary-biologically contestable concept of species conservation also contributed to his avoidance.

“All too willingly man sees himself as the centre of the universe, as something not belonging to the rest of nature but standing apart as a different and higher being. Many people cling to this error and remain deaf to the wisest command ever given by a sage, the famous “Know thyself” inscribed in the temple of Delphi.
— Konrad Lorenz, On the Virtue of Scientific Humility, Ch. XII : On the Virtue of Scientific Humility