You are here: Home › archeology › Jules Quicherat – the Father of French Archaeology 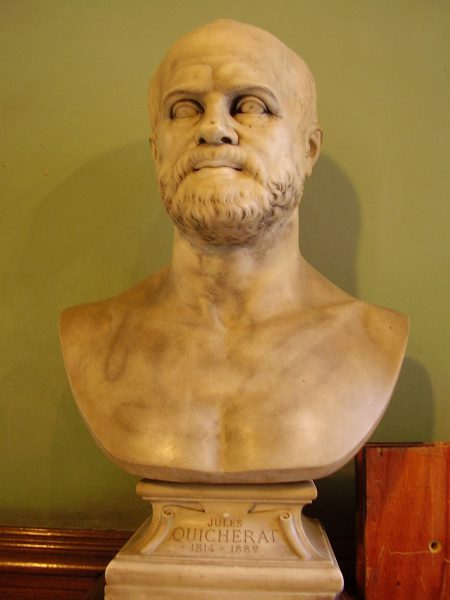 Bust of Jules Quicherat, in the hall of the École des Chartes

On October 13, 1814, French archaeologist and historian Jules Étienne Joseph Quicherat was born. Quicherat was one of the founders of archaeology in France. In 1847, he inaugurated a course of archaeological lectures at the École des Chartes. His students circulated his principles throughout France, recognizing him as the “founder of national archaeology”. He wrote on the history of medieval France, and also edited texts of the trial and rehabilitation of Joan of Arc (1841-49).[4]

Jules Quicherat was born in Paris, France, the son of a working cabinet-maker, who came from Paray-le-Monial to Paris to support his large family. He was fifteen years younger than his brother Louis, a great Latin scholar and lexicographer, who survived him. Although very poor, Jules was admitted to the College of Sainte-Barbe, where he received a thorough classical education. At the end of his studies he hesitated for some time before deciding what career he would follow, until Jules Michelet ,who had written an admirable work on Joan of Arc, put an end to his indecision by inspiring him with a taste for history.[4]

From Joan of Arc to Louis XI

In 1835, he entered the École des Chartes. Once more inspired by the example of Michelet, Quicherat published a text of the trials of Joan including contemporary evidence on her heroism in his Procès de condamnation et de réhabilitation de Jeanne d’Arc (1841-49) and the Aperçus nouveaux sur l’histoire de Jeanne d’Arc. From the 15th century he drew further inspirations. In 1844 he published memoirs of the adventures of a brigand, Rodrigue de Villandrando, which gradually grew into a volume full of fresh matter. He wrote full biographies of two chroniclers of Louis XI, one very obscure, Jean Castel, the other, Thomas Basin, bishop of Lisieux, who was, on the contrary, a remarkable politician, prelate and chronicler.

In 1847, Jules Quicherat inaugurated a course of archaeological lectures at the École des Chartes. One year later he was appointed professor of diplomatics there. Quicherat became known as a good teacher and despite his nasal voice his lecture hall was known to be always full. In his works La Formation française des anciens noms de lieu (1867) and De l’ogive et de l’architecture ogivale (1850), Quicherat introduced his theory on the use of stone arches important for the history of religious architecture. In an 1874 article on L’âge de la cathédrale de Laon, he declared an exact date for the birth of Gothic architecture.

Quicherat started transcribing his archaeology lectures towards the end of his professional life. However, only the introductory chapters, up to the 11th century, were found among his papers. Still, his students circulated his principles throughout France, recognizing him as the founder of national archaeology. In 1871, Quicherat was nominated director of the Ecole des Chartes. In 1878 he gave up his duties as professor, and in 1882 he died suddenly a short time after having corrected the proofs of Supplément aux témoignages contemporains de Jeanne d’Arc, published in the Revue Historique.

Jules Quicherat, the Father of French national archaeology, died suddenly at Paris on April 8, 1882, at age 77.